I wake up bright and early for a simple zone 5 bike session.  Coach Dave had decided to give me some zone 5 intervals and a run in the same day but said to separate them by 8 hours, 2 meals and a… Nap.  I complain to Nick, “OH no!  There is a NAP in my training plan!”  He responds, “Well, it’s about time.  You need to just relax and take a nap sometimes.”  No sympathy.

So, at ridiculous dark’o’clock today, I go about the routine of setting up and discover only one last bit of coffee left in our house.  Well, I brew up a nice big pink mug ready to wake up and tackle the tough looking session.  I feel too tired to move my bike trainer into the garage so I turn on the fan In our “dining room” now being used for my trainer and I decide to fill my “bike trainer bucket” with ice.  I bring this adorable frog bucket into the kitchen and mix up my Osmo hydration drink.
Meanwhile, Lucy the cat knocks over my bucket (still empty).  I ignore her.  Then she wanders off and begins her miserable cat hacking and wheezing.  Oh, gross, it is hairball time.  I watch in disgust and slight panic (I have to clean it..eeek) as she comes back still wheezing and hacking (gross!!) & heads straight for my trainer bucket.  She sticks her head inside it.   I am cracking up and taking pictures because this is just too perfect.  She knows what it’s “really” for!  She runs off though getting scared with me causing such a ruckus laughing at her and she leaves it empty, luckily. 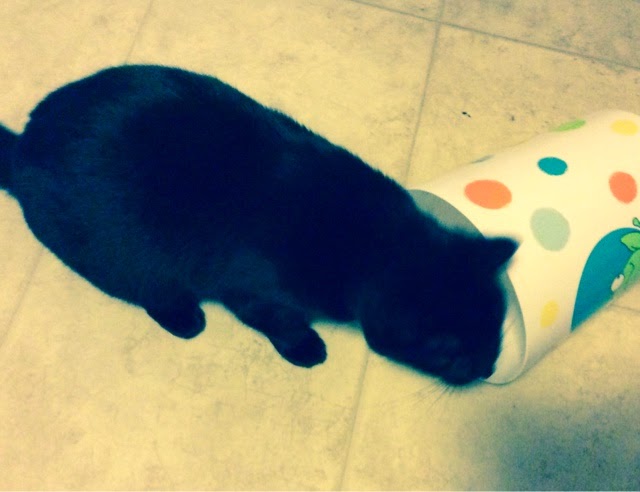 So, I clean her mess (yuck), get my act together and then I decide to add some excitement to my ride. It’s dark o’clock on a Saturday and the first of two big sessions & way too quiet so I decide to plug in the disco ball for fun and listen to some 70’s tunes to get warmed up while I ride. 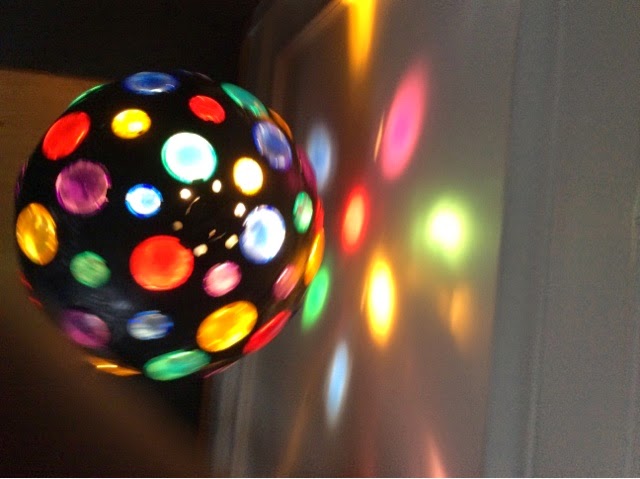 So things are going well.  I’m drinking my coffe on my bike and then…. THIS: 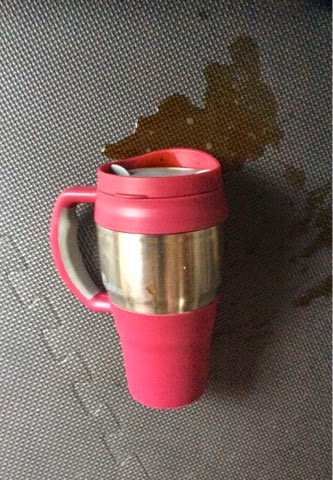 Nooooooo.  It’s my… Coffee.  “Don’t cry over spilled milk,” they say.   How about spilled coffee?! I want to bawl.  I have no time to spare for tears though, so I grab a caffeinated Picky Bar instead.  I’m a caffeine junky, I confess.
My workout begins with a nice long spin on the bike trainer, followed by a few one minute hard bursts before the big main set. I get through the first hard bump in intensity feeling good and my legs are really warming  up.  Now,quick flashback to yesterday:
Yesterday I was cleaning & getting rid of all kinds of clothes to go to Goodwill and Nick asks about this worn out long sleeved shirt.  It says on the front: “I don’t want to join your pyramid scheme.”  I flat out refuse to give it to Goodwill.  He says “You have had it for 10 years, it is cheesy and you haven’t worn it in ages.”  Good points.  I’m stumbling, “I eeeerm, I well.. I thought it was lost.  I’ll wear it tomorrow.  I love this shirt!”   I don’t actually want to wear it in public ever again… but I also don’t want to lose an argument or my nostalgic t shirt. 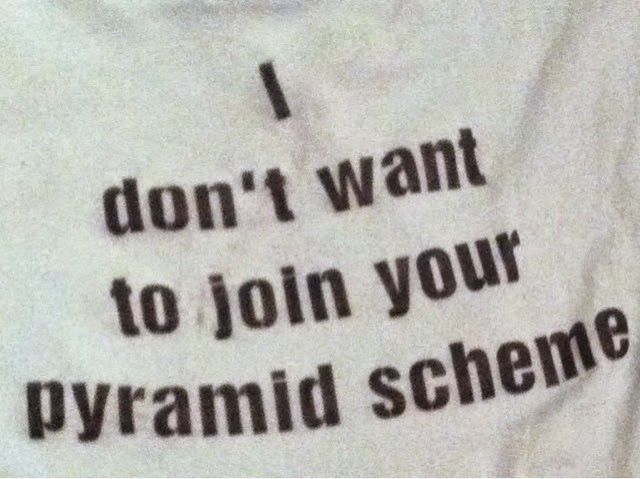 Why the weird shirt?  In 2003-2005 I was often approached by those products sales quickstar amway scheme type people.  I think I have “friendly resting face” and an approachable demeanor.  I couldn’t leave a gas station, gym, Olive Garden, Starbucks, book stores or even shoe shopping with out some “friendly” character striking up a casual conversation & then trying to convince me to go to a seminar where I could learn how to become a millionaire by buying products I would use anyway and build my network of friends & contacts under their guidance full or part time.  “No thanks, potential pyramid schemers.” Once, when grocery shopping in 2003, another young couple started talking to Nick and me.  They had just moved to the area and wanted to know where to go for drinks for good beer. Beer had us connected so they got Nick’s number (this was before FB and before so many in RVA liked micro brew).  Well, Nick was sure after they left that it was another pyramid scam.  I bet him a dollar it was not. I thought they were just lonely and new in town.  I bet on the genuine nature of humanity and I…well, I lost a dollar that week.  So, I had this fun shirt made.  I wore mine nearly every weekend because it was both hilarious (to me) and it might have warded off some more schemers.
Flash forward to present…
So I had promised to wear the shirt and I figure warming up in it counts.  I’m wearing my “I don’t want to join your pyramid scheme” shirt from my blissful days of being 23 years old.  I’m turning pedals and heating up on my bike trainer with “It’s Raining Men” blaring and my disco ball colors spinning.  I decide to bail on the extra layer.  I pull off the long sleeved shirt, drop it quickly to get ready for my next quick 1 minute burst of intensity on my bike trainer but my feet & pedals… will.  Not.  Move.
I look down at the drivetrain… Oh. No. 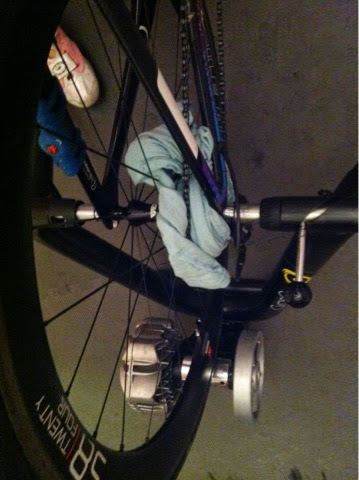 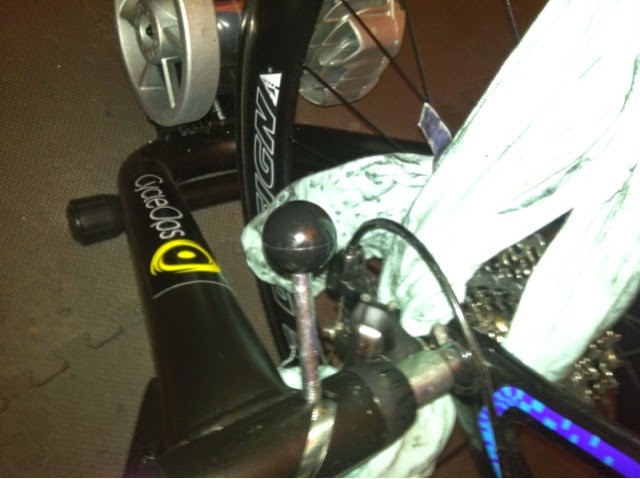 My shirt had landed in my drivetrain and is now completely stuck.  Noooo!  That’s karma coming back at me & punishing me for giving Nick a hard time yesterday.   So, I try pulling it out but it’s really jammed up.  My hands are covered in black grease and the clock on my Garmin is just ticking.  I holler for back up…”Nick, my shirt is ruining my training! Help!”
He comes down and cracks up at me as I’m forced to take scissors to it.  I insist I’m going to use “dawn” or “pine sol” to get the grease stains out and convert it into a fun new camisole.  It winds up in the trash. I’ve lost the t-shirt battle. 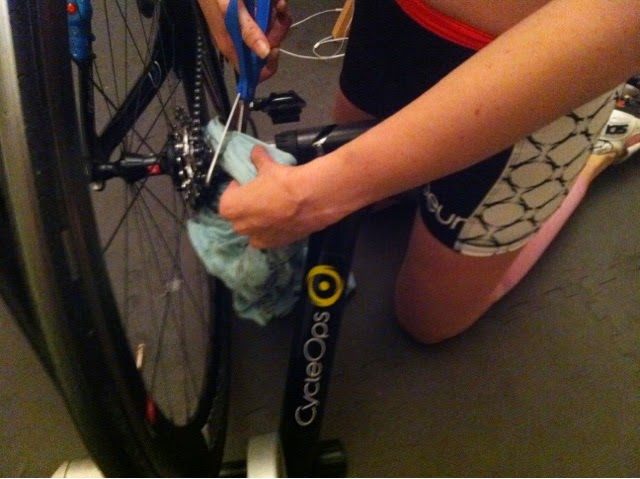 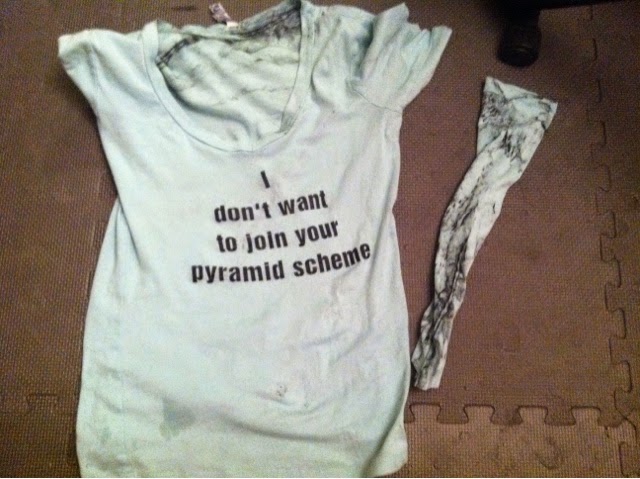 Well, I hop back on my bike and once I enter the main set, I’m furious.  I’m out of coffee, my cat is annoying and I had to toss my smart & memorable shirt.  I go out on my bike just way too hard. I start the interval out 30 watts higher than I averaged my 5 min z5 intervals last week.  It is too much.  My power (effort) dies throughout the interval as my heart rate spikes. However, the next few intervals, once I collect myself have some good power numbers and are much more consistent.  They are ALL a tad higher than last week so that’s exciting.
Now it’s time for a triathlete nap.  I’ll have to make a new witty shirt that is more relevant.  Any ideas? : )
By PVD@dm1n_072415|2014-11-29T10:18:00-05:00November 29th, 2014|