I felt I needed a refresh or even a new beginning in triathlon.  I’ve been through a lot in this sport.  I’ve made progress and met incredible people, some of the most inspiring I’ve ever known.  Yet, I also had some serious setbacks on so many levels.  I just wanted a mental reset.   I needed to close that chapter and just start a new.  Although its only 2 weeks post FL 70.3, I found myself at the start line of Angels Race, a sprint triathlon in Lynchburg, VA.  In 2008, this was the first triathlon I ever raced.  My goal this time around was to retrace my steps and rejuvenate my love for the sport by the roots while performing the best I could on the day.
At packet pickup I found my signature from 2008. 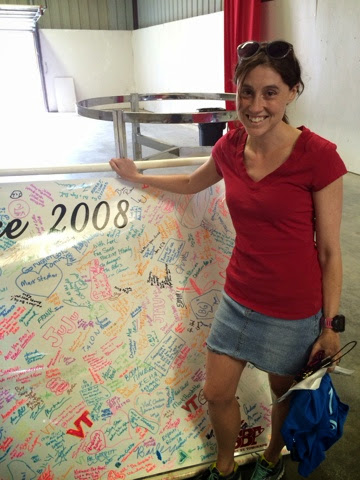 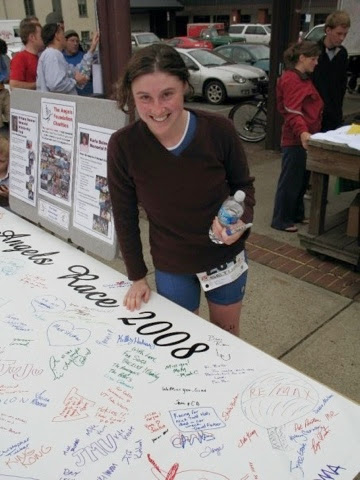 This “race year page” was signed post race in 2008, minutes after I fell in love with the sport.

Even back when I decided to give triathlon a whirl,  I was pretty adamant about strict adherence to my training plan.  I had borrowed a paperback book from a friend called “12 weeks to Your First Triathlon” and wanted to start right away.  I discovered a race with in 2 hours (barely) from home exactly 12 weeks away on the calendar and got to work.   Looking back, I was pretty ignorant of the fact that the brutal climbs and technical turns of this course might not be ideal for a total newbie.  Perpaps, I knew it would be difficult but I wanted the challenge and more so, I didn’t want to wait a few more weeks to start training.  I never did like waiting.
My background in the sport was nonexistent.  I had participated in a 10K one time and surfed in the ocean, but I could not swim with my head down.  I could do a glorified doggie paddle at best.   Regarding cycling, well my first few rides of 6 miles on a very easy route felt daunting and exhausting.  I wore a camelback to avoid having to take my hands off the bars in training and in my first race.
I had always been on the small boned side, but I was definitely not very fit.  Nonetheless, I tackled this challenge and had to buy my friend a new paperback since I dogeared and wore out the pages of the tri training guide.  I wasn’t a natural by any means.  Some athletes show up at their first or even second event and discover potential and raw talent with a podium finish and blistering fast paces.  I was not that athlete.  Did I mention the camelback?  I also cried from nerves just before the start of Angels in 2008.
Then… 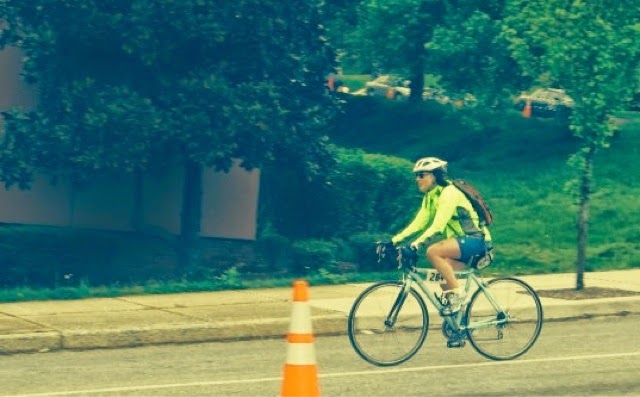 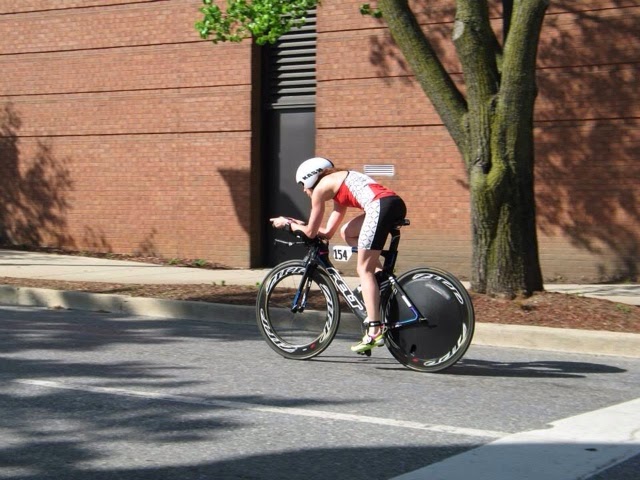 Lynchburg is called “The Hilly City” and lives up to its name.  I cannot believe as a brand new triathlete I conquered those hills with no triathlon mentors (although Ed Ip was my bike mentor of sorts).  I had no team or coaching or know-how other than a dog eared paperback book and the love and support of my husband.  I had never even seen a race. Those hills were steep and the course looked daunting on the pre-drive even with my veteran perspective this year.  Yet, In 2008, I endured and discovered a deep love for the sport and immediately recognized the connections with other athletes and bigger meaning and lessons of triathlon.  Once I pushed past the adversity of the race and finished my first back in 2008, I was hooked.
I can now say from experience that it feels the same being closer to the front of the race as it did towards the back of the pack.  Finishing this very same race course in 1:42 a few years ago as my first triathlon and winning my age group with a 1:17 this year felt equally challenging, thrilling and ultimately rewarding. 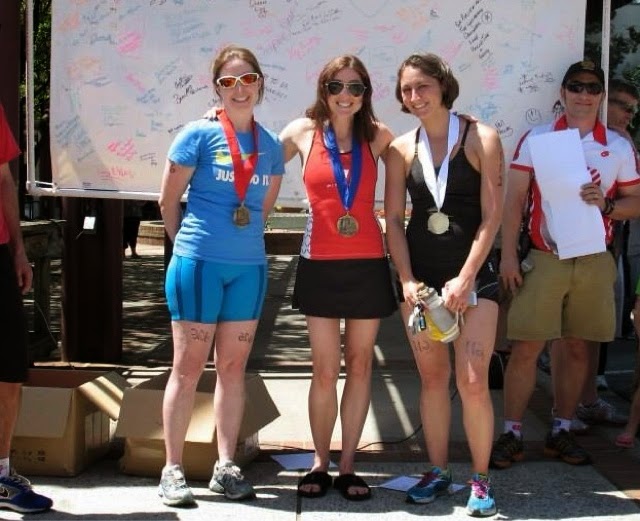 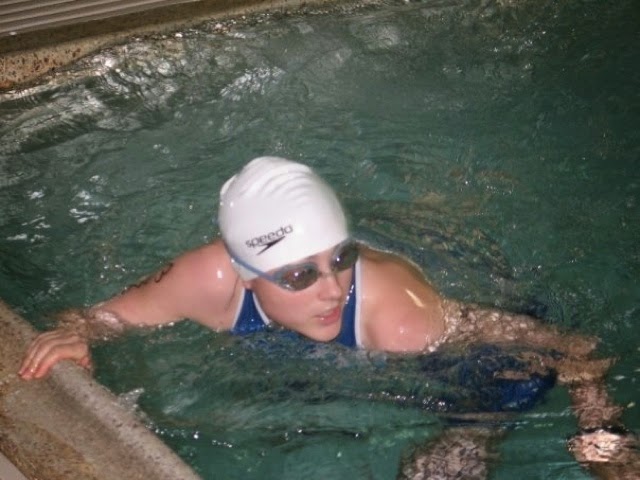 Physically and emotionally the exhilaration of being in the race with others, striving towards a goal while pushing the physical limits (muscles nearly relenting and heart pounding up those crazy steep hills) are identical regardless of what those personal limits/pace potentials happen to be on that day.  The same intimidated feeling upon sighting the last steep run climb to the finish returned this year along with the absolute familiar thrill of working my way up the hill getting closer to the end with every stride.  Those elements were there both then and now.
When I burst across the finish both this year and in 2008, I had the same thoughts of, “I cannot believe how awesome this is and I want to do more…lots more of these!”
Physically it was just as challenging although the time difference was about 25 minutes between the years.  My lungs and legs were burning and I was not sure if I could go another step yet I was constantly pushing inside myself for another gear in both 2008 and 2014.  I’ve improved and learned a lot over time but the challenges of racing and the triumph of conquering goals is no different.  The feelings of camaraderie out of the race course with everyone striving for their own personal victories while pushing each other to higher levels through competition and often even open encouragement remains regardless of where in the course one falls.
That addictive excitement and sense of pride that stems from working towards and achieving goals is rewarding regardless of the individual measure of success.  The set backs to overcome might be stepping off the bike and walking the last steps of the hill (2008) or not being able to hit a certain average power number (2014), but regardless they are relevant and important parallels of the race puzzle at the different levels I’ve been.  Resolving and rallying to move past these obstacles and still work towards the remaining goals and finish strong is what mattered in these comparable circumstances.  Trying to select which extra layers to wear out of T1 to best tackle my goals in 2008 resembles the struggle of trying to determine when to slip my feet into my bike shoes after my flying mount out of T1 this year. 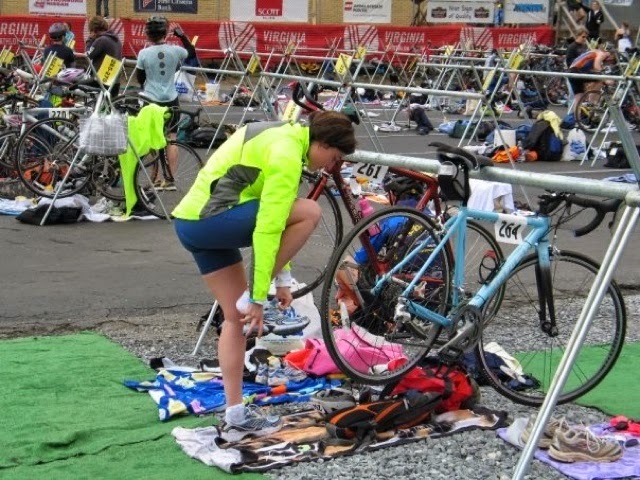 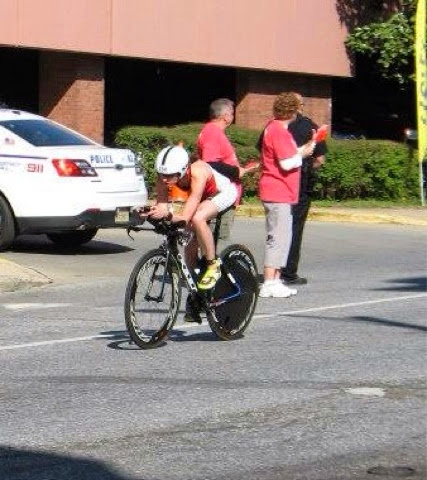 Both obstacles were part of intelligently approaching the challenges of a race but the pieces were different because I was at a different stage in my journey on that first race vs where I have worked to be today.  Further, when pushing the body to its extreme  limits on the day, that familiar adrenaline and mental battle to continue moving forward feels identical if you are truly pushing the body regardless of the speed.  I’ve been able to raise my limits to a faster pace over the years, but I don’t think the emotion or exertion was different at all when running up that last hill to the finish in both 2008 and 2014.
Then…. 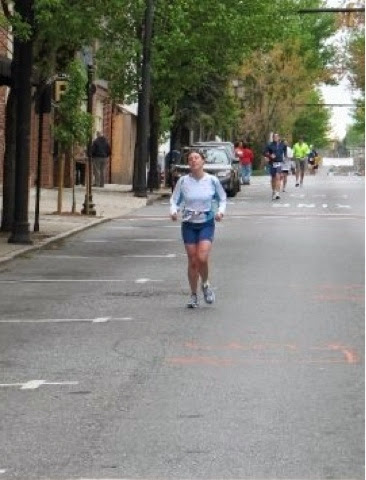 With experience and a lot of HARD WORK my times dropped but the bliss of conquering the adversity on the day remains a constant.  This is what keeps me coming back to racing.   I am fortunate to have the lens of both perspectives being familiar with the experience of the middle or even back of the pack and the view from the age group podiums as well after years of patience and consistent work.  I’m not a naturally gifted triathlete and I have extremely average athletic genetics (at least according to my “lovely” V02 max tests putting me in the mid-point average of the bike and run- augh!)  but I am incredibly addicted to progress and thrive on the challenges of testing limits and raising my personal bests through racing triathlons.  I also enjoy all the friends I meet along the way.  I have been in love with the sport since my first day. 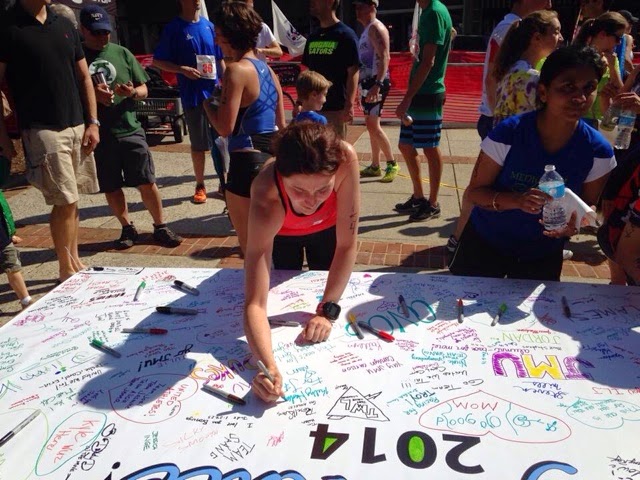