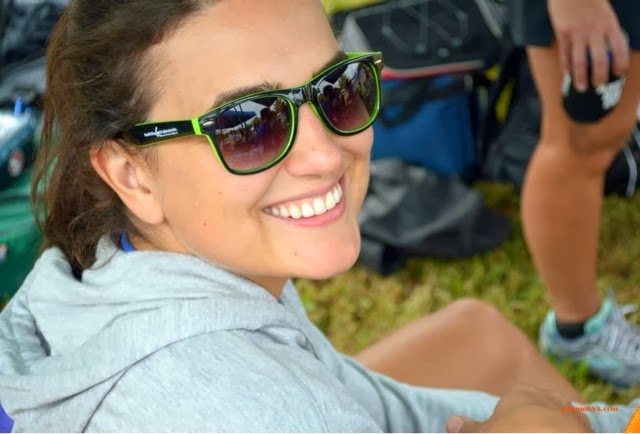 Watching Ashley embrace triathlon as a lifestyle and a passion this year was very exciting. She set big goals for herself and did all she could to go after them while sharing the sport with those close to her along the way!  Look out tri-world, this young woman had a breakthrough season in 2013 and is only getting stronger.   Here’s Ashley’s story:

1.     How did you get into the sport and what motivates you to stay?

I decided to run the Monument Ave 10K in 2010 because my company (the Martin Agency) was paying for our race entries. I

That year, I remember seeing a bunch of the local Triathlon clubs at the 10K expo and was very curious about the sport of triathlon. I used to be a swimmer – swimming over the summers ever since I was a kid. I used to love riding bikes, but hadn’t owned one since high school. Given how I didn’t care much for running, I thought it may be nice to mix it up a bit. Plus, I really needed some sort of structure or goal I was working towards to make sure I worked out consistently.

The only problem was – I had NO idea how to get started training for a triathlon. How do you effectively ride a bike to compete? What type of clothes do you wear? What type of workouts should I be doing? Etc. I researched some local triathlon training teams and stumbled upon Endorphin Fitness. They were offering a triathlon “boot camp” one Saturday at the Tuckahoe Y, so I figured I’d give it a shot. I bought a cheap, hybrid bike from Agee’s (who by the way, never adjusted the seat or anything for me – just sold it to me and let me leave!) and joined that boot camp thingy. It was a blast and really interesting. I decided to sign up to train with them over the summer.

Once I competed in the Pink Power, I was surprised by how fun it was. My time wasn’t as good as I had hoped and I remember thinking how I can’t wait to do it again so knock off some minutes. I love looking back over the year(s) and seeing personal improvements.

2.  What is the one piece of training equipment or triathlon product you wouldn’t want to be without?

Probably my Garmin – I’m a data geek and love analyzing my workouts. The other day, I was thinking about what my top 10 favorite expensive purchases have been and the Garmin would definitely be at the top of that list.

3.  You’ve made a lot of progress this year in triathlon, what is your secret to getting faster?

Keeping at it. Most sports have come naturally to me and I have always been able to get up to speed quickly to compete among good athletes. However, triathlon has been a very humbling sport. When I first joined EF, I was pretty discouraged. There are so many incredible athletes, and I couldn’t keep up (swimming was the exception). Everyone kept telling me how triathlon is a sport of persistence. You have to put in the work before you start seeing results, which made sense. Aside from the naturally gifted triathletes, most everyone else has to really work at it. I was happy to start seeing personal improvement over 2013 (the first full year I trained with EF). I’m excited about what this year has in store!

4.  When was your first triathlon and what lessons have you learned between now and then?

My first triathlon was the Pink Power in 2011. I competed in that triathlon after training with EF over the summer.

As far as lessons go – the main thing is to make sure I get in my workouts. I also try to relax during the swim part of the race because if I get too excited/out of breath, the rest of my race usually suffers. Nutrition is something I still need to figure out. I honestly believe some of my sub-par performances in longer races or training rides/runs are because I’m not fueling properly. That’s another WIP for this year!

5.  You balance life and sport really well.  In fact, Pink Power was a real “family affair”  for you.  Tell me about that experience.

One surprising benefit of doing triathlons or running races is how it inspires others to get active. I’ve had a ton of friends ask about my experiences or for advice on getting started/training. My mom and sister at great examples of this! They both came to cheer me on at the REV3 Williamsburg and were hooked by the energy and excitement. They both decided to sign up for the Pink Power since it was all female and a great race for “beginners.”

In fact, my sister is a huge inspiration to me. She’s a Type 1 Diabetic and was concerned about how her blood sugars would handle endurance sports. Instead of letting it define her, she and her husband signed up for the Monument Ave 10K training team last spring (2013) after completing a “couch to 5K” program over the holidays. They were both hooked on running after the 10K was over. She also wanted to continue her training and eventually signed up for the Richmond Half Marathon with me. They have quite a few other races on the docket this year! For any other diabetics out there, she has documented her journey on her blog, www.below-seven.com.

6.  What is your favorite race?

I’ve only competed in a handful or so of races, so it’s hard to say. I really enjoyed the REV3 Williamsburg Olympic Tri in June. That was my first Olympic, which I was incredibly nervous about. I felt amazing throughout the whole race and pleasantly surprised myself with my bike time. When I finished, I was so incredibly happy and felt an amazing sense of accomplishment.

7.  What organizations/individuals have been important to your training experience this year?

The workouts and friendships at EF have been crucial to my training this year. Kyle sets us up with workouts we need to be in proper shape and compete. I had a horrible race at the RTC Sprint in April and felt deflated. I made it my mission to get in better shape to actually compete well at the REV3 Williamsburg. I think that’s also why it was one of my favorite races! Brian Lilley and I also started dating around the time of the REV3 race and it’s also been wonderful having a workout buddy.

8.  When you are not swim/bike/running what are you doing?

I love to travel – whether for personal reasons or for work. Traveling often impacts my training schedule, which is a bummer, but I wouldn’t change it for the world. Work sometimes gets hectic, which makes getting to practices difficult at times. However, I end up exercising at home. It’s also really important to me to make time for friends and family. I try to make time to do fun things with them whenever I can.

9.  What adventures and accomplishments do you hope to achieve in endurance sports in the upcoming season and beyond?

I signed up for the Mussleman Half Iron race this summer! I’m incredibly nervous about it, but have faith in my training plan. J I’d also like to continue to make positive progress on the bike and run throughout the year. Buying at Tri Bike is at the top of my wish list!!