One of the best parts of triathlon is the people I meet along the way.  There are so many amazing people in the sport at every level from diverse backgrounds who inspire me.  In fact, during my last ironman, I dedicated one mile to a person who had impacted my training in some way which helped keep me motivated and strong through out the race.   It was actually difficult to choose only 26 individuals.   Other people in this sport make an impact on me and we all motivate and push one another as we pursue our individual triathlon journeys.  The collective spirit of the triathlon community is amazing.

As I train for IMMT I will highlight some of the people I find inspiring, exciting, interesting and fun in this triathlon world.  For now, I believe I am going to mostly select Richmond, Virginia area athletes or those training for IMMT.  The first highlighted athlete of the year is Amy Williams!  Her answers are in depth, interesting with some great advice and motivating stories.  Enjoy getting to know her today and if you see her in person just know she’s not one to back down from a challenge and in fact she’ll pretty much demand you to enjoy it with her. 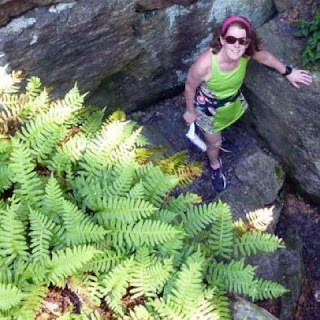 Amy is a fun loving, dauntless woman who is involved in many endurance sports organizations and loves to connect with others.  She’s consistently finding new PR’s and is also an ultra runner and an ironman finisher.  Amy is constantly seeking and taking on daring challenges and bringing those around her along for the ride whenever possible.  She is good natured to the core, an ever positive attitude and a tough as nails breast cancer survivor who trained right through her recovery.

1.  How did you get into endurance sports and what keeps you in it?
In school, I was always the last girl picked for any team because I am so slow.  I always like to excel at anything I do, and sports were obviously not my thing.  So I checked out.  As a result, I led quite a sedentary life until I was in my 40s.
I was overweight, and started walking to lose some weight and feel better.  I bought several books about running, long before I ran a step, and my husband noticed and declared, “you will hate running.”  That was enough to get me going.  At first, when I couldn’t run more than 20 seconds without getting winded, I hated running.  But I needed to prove that I would like it.  Before long, I loved running.  And I learned something I wish I’d known early in life: it doesn’t matter if you beat everyone else (or conversely, if you are last in a race).  All that matters is that you do the best that you can do.
Later I added swimming and biking as cross-training, and got a post card about doing a triathlon with Team in Training.  At the time, my father was a leukemia survivor, so I did my first triathlon in his honor, and keep him in mind during all my races.  He was very proud of my accomplishments, and a bit daunted by them.  He passed away last June.

2.  When you are not swim/bike/running what keeps you busy?

I am a structured finance lawyer at Hunton & Williams.  My practice is not adversarial; instead, I spend my days helping clients achieve their goals.  I am married and child-free, although I do have two very demanding English cocker spaniels: Jeeves (after the PG Wodehouse character) and Maggie (a red cocker named after Margaret Thatcher).

3.  What has been your most challenging race or training experience to date and what did you learn?

Two years ago, Holly McFeely and I ran a series of long trail races, culminating in the North Face 50 miler.  Running on trails is much slower than running in a road race, such as a standard marathon. Holly and I are not fast, and we constantly worried that we would miss cutoffs.  After running about 38 miles of the 50 miler, an ice pick began to jab my knee repeatedly.  Holly was having issues with her feet.  We were a pair!.  Every step hurt.  She and I took turns crying and comforting each other.  We tried not to cry at the same time.  One of us would feel better and say, “okay, you can cry now.”
We got to a water stop approximately five miles from the end, and learned that there was no way to finish within the cutoff.  That’s okay: we’ll still finish, I rationalized.  To heck with cutoffs.
But then the race director explained that the five miles remaining on the course included a short out and back spur trail totaling two miles, and we would not be permitted to do the spur trail.  There was a truck there, but our request to get in the truck for three miles to the finish were denied.  We had to get back to the finish on our own two feet.  It was at this point that both Holly and I cried simultaneously.  At the end, we ran through the finish chute, and they gave us medals.  But we ran only 48.5 miles on that day.  Whenever I look at Garmin Connect, it reminds me that this is my running distance PR.
Many would consider this a failure.  But it was the hardest thing I have ever done, and I did it to the best of my ability.  I am proud of the accomplishment.
4.  What groups/organizations/individuals have been important to your journey in the sport this year?
Many of my friends and training partners raced Ironman Florida in 2013.  As they planned for this race in 2012, I considered it, but somehow it didn’t resonate with me.  I decided that I wanted to complete six half ironman races in 2013, instead of focusing on one full ironman race.  Tyler Johnson said, “that will be easy for you.”  So I hired him to be my coach.  He understands me and what motivates me, and the one-on-one coaching he’s given me over the past year has been phenomenal.
5.  What is the best advice you could give to someone training for their first ironman?   In two sentences or less.  : )
Prepare your family!  It takes so much time to prepare for an Ironman race, and if you have a supporting family it will make life much easier.  Be sure to plan something really special for your spouse and family once the race is over.  You’ll owe them!

6.  You successfully completed an impressive 6 half ironman races in 2013.  Can you tell us which ones you did and which was your favorite?

Ironman Texas 70.3.  Fast and salty swim, awesome flat and windy bike course, and a run course that was configured so I saw my coach practically around every corner.  I got a huge PR at this race.
Kinetic Half.  I was sick the week before this race.  I thought I was recovered, but there’s a difference between “I feel better” and “I feel as though I could do a half ironman.”  Painful!
Ironman Raleigh 70.3.  I was feeling great on this ride, going up a hill and thinking “I am going to get a PR, despite these hills!”  At that moment, I heard a gunshot.  It was a flat tire.  Unfortunately the valve in my spare tube was too short for my race wheels. While I waited in the baking sun for race assistance for an hour, I realized that my foot was in a bed of fire ants.  OUCH.  I did finish the race, but my time disappointed me, so I’m going back again next year.
Rev 3 Maine.  What a great race!  Small town feel, awesome race and a post-race lobster bash.  And I got a PR.  This race was my favorite in 2013, although they were all great.
Mightyman Montauk.  I thought Long Island would be windy, coastal and flat.  Nope!  This was one hilly race.  And gorgeous.  The run course featured something called “murder hill.” It just about murdered me.
Rev 3 South Carolina.  This was one hilly race!  I enjoyed it, though, and by doing it I qualified for an age group world championship race to be held in China next year.
I don’t think I’ll go to China, but I also qualified for a Rev 3 Championship race to be held in Knoxville next year: that one I’m going to do.
7.  You keep getting faster and going longer and making improvements all over the place every year I’ve known you.  Which accomplishment makes you most proud?
There’s no single accomplishment that makes me most proud.  Instead, I am proud that I keep at it, despite continuing the be the red caboose.

8.  I saw your posting a bright orange waterproof bag for your shoes on FB recently.  Why are you adding this to your training?  (I think I know the answer!)

On my 52nd birthday, I will compete in the SOS Triathlon, an 8 stage triathlon in New York state.  After an initial bike leg, the remaining seven stages are running and swimming, all point to point. You have to carry everything with you, so your shoes go with you as you swim across three lakes.  The bag is my current idea about how to make that happen, though I hear many people just shove their shoes down their tri shorts!
9,  What do you hope to accomplish with your adventures in training this upcoming season and beyond?
My year will start with ultra running, and then I will compete in several half ironman triathlons before doing the SOS triathlon and, finally, Ironman Chattanooga.  I am hoping to get faster, especially at running long distances and swimming, but the main goal, as always, is to have a blast.