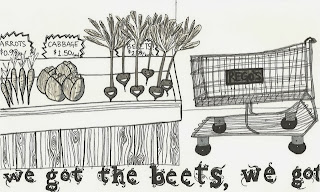 I was recently receiving a “biometric screening” for health insurance discounts.  They recommended we fast over night and then they would run some basic medical tests one morning.
I didn’t think twice about downing a Pumpkin Spice Latte and dashing up the stairs first thing in the AM for testing.
I didn’t think my latte “counted” as food but it sure messed up the results.  As a triathlete back in action I thought I’d be a glowing example of health with off the charts excellent numbers but gasp… my sugar levels were crazy high and my blood pressure was above normal as well.   This was not good and I’m pretty sure my blood pressure only became even worse upon hearing this ego bruising and concerning news.  Luckily, I discovered that my Pumpkin Spice Latte had impacted the results.  A little asterisk was put next to my name  as a rebel who “did not fast” and I was sent on my merry way.
I proceeded to investigate blood pressure and blood sugar.  Nutrition is once again on my radar and I discovered beets.  Beets are a “superfood” packed with nutrients and are said to balance the body’s use of oxygen and aid as a remedy in lowering blood pressure.  Some say that the vegetable even has a positive impact on endurance capabilities and I’m a no stone left unturned kind of woman, so I decided to try it.   Beets are beautiful but I found out that they taste like a mouthful of dirt.  I didn’t enjoy raw beets.  I purchased some beet juice and had to pour it into tiny shot glasses and down it quick with a lemon as a chaser.  Like a 21 year old on her birthday at a pub crawl.

I reached out to the best example of nutrition for performance that I have ever seen, Chad.  Chad treats food like it is fuel and is not tempted by items that would compromise his performance.  He is Mr. Discipline evaluating food by nutritional value primarily rather than cravings.  People may brag and boast about killer epic long tough workouts and power numbers.  He’s a top age grouper in the country but I admire this guy the most for his unwavering commitment to fueling his body with all the nutrients it needs and never thrashing it with anything to unbalance the system.  That my friends is something seriously tough and worth boasting about in MY book!

I personally, am a salt addicted, sugar and processed food junkie who has been infamous for my “junk food diet” of 2012 but I’m trying to be better.   Sure enough, beets are a staple in his diet.  Chad told me he juices the beets and mixes them with other fruits and vegetables.
I mentioned this to the ever patient and creative Registered Dietitian, Tina Shiver, who works with many of us local triathletes and she strongly encouraged my beet discovery.  She’s always so supportive when I develop positive habits and she helps me work around my less than ideal food ideas as well.

In my attempts to acquire a taste for beets I asked my FB pals about “juicing” with an overwhelming response and advice.  It is a cathartic post workout activity that can be somewhat meditative and fun.  I don’t like beet juice but I do love juicing.

I have also discovered my new favorite restaurant, The Silver Diner which has revamped their menu to add items such as a salad with beets, kale, apricot, Brussels sprouts tossed in a delicious vinaigrette or a spicy sante fe style roasted veggie dish that also has beets.   The Silver Diner is a great place to meet up with pals for lunch and enjoy this healthy super food.  I need to learn how to make this at home though, but until then its a great place to splurge guilt free.

Most Successful Juice Concoctions:    I just toss the ingredients in and do not worry too much about the quantities.  Its all about the art and the experience.