One day last summer, I walked into the gym’s parking lot to find a P5 and his owner!   I was like, “Wow, nice bike,” and made a new pal. The owner of the bike was also a good guy! Months later, at the Richmond Endurance Symposium, I eyed this super bike and although I wasn’t wearing my heart rate monitor, I know that my pulse quickened a bit. 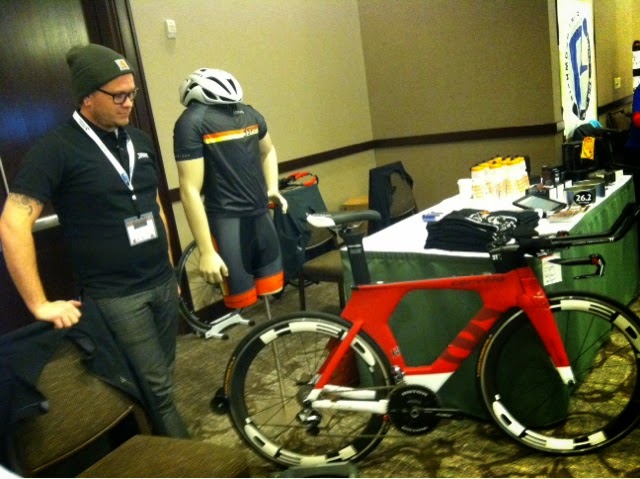 I have owned a Cervelo before.  This one was stunning.  I spent an excessive amount of time at the expo standing at the 3Sports table and unsuccessfully internally talking myself out of falling for her while getting to know James, my now go-to guy at 3Sports.  Look how aero she is.  James is pretty low key and gave me a hard time straight away about my interest in this crazy triathlon bike.  Fun! 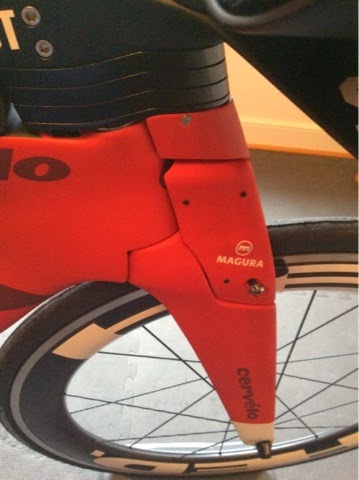 I had a Cervelo P2 long ago named Stella and after my crash she was rebuilt in a new frame and renamed Beatrix Stella Kiddo.  Yes, I name my bikes.  I spend countless hours with the bike and we develop a relationship of sorts.  I sing to my bike on long rides.  I cry in my aerobars at times.  I know how my bike responds to every little move.  I become confident in the machine and the machine is also a confidante who is there for me ready to take me through all my ups and downs on the course and in life.
You see, I was kind of looking for a new TT bike for 2015.  I had been wanting a different bike.  Although I name my bikes and personify them I’m aware they are objects.   The tend to remind me of jewelry as they are beautiful and deeply  personal objects that carry a special kind of energy and memories with them.  They also carry the weight of burdens.  I certainly went through some rollercoaster times with Punky Bruiser right from the start.  Riding her just was not feeling right, spiritually.  The lotus flower sticker I had added last year just wasn’t “enough.” It was time for a change.
I had a bike fit done with seasoned professional bike fitter, Dave Luscan (my TriMentor) on the Retul bike and my optimal position came out with numbers that would not be achievable on Punky.  Yes, I finally had a “logical” reason to support what I wanted to do anyway… move to a fresh bike and build better, faster, stronger, smarter memories.  When Dave and I discussed which frames would work best for me and be at least a lateral move in bike performance or an upgrade most of those bikes had 650 wheels and one of those bikes was a Cervelo so of course I was all about the P5.  This is the benefit of having an outside of the shop fitter who is not selling you a bike.  You have a neutral perspective and know with greater confidence which frames are actually ideal.  More to come on this topic and 650 wheels too.
I looked around at all the shops in town and even considered an IA (not ideal given the frame size…but Rinnie did it) However, when I finally talked to James at 3 Sports, I knew it was time for the P5.   I like going to that shop as the group is really fun and I also once spotted a darn near celebrity cyclist/twitter expert who would prefer to remain anonymous!  (Haha)  James was awesome to work with and he coordinated my whole bike “project.”   He responded to all my long emails with quick and accurate answers to my questions.  There was even coffee time when I came by the store and we sat by the fire in the shop to talk about the bike.  He linked me up with others in the shop to perform work etc during the various phases of the build and was really fun process.   It turned out I could sell my other bike items on eBay with their help to fund this big project in a low stress- zero hassle manner.  Two sets of really nice race wheels, a mountain bike (Buffy the Trail-slayer), my old tri bike (Punky), a disc wheel later and I could justify this super bike.  I have cleared space in the garage too! 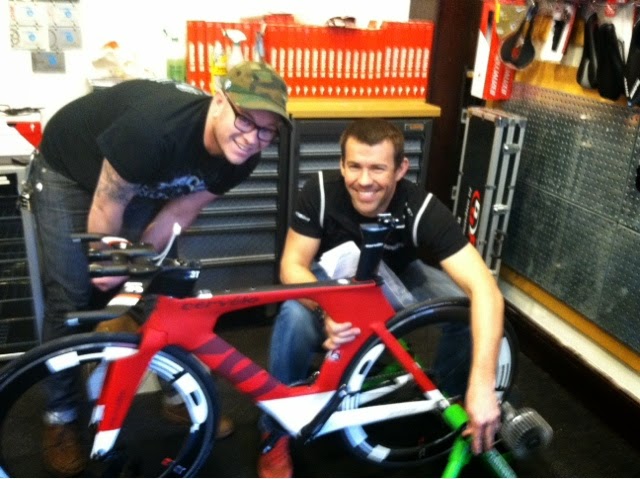 She was built and ready to roll last week. 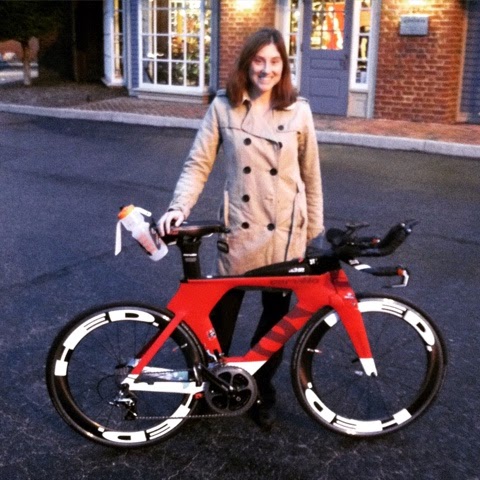 On our first bonding session/ride we got her name.  Meet my P5 bestie, Yvette. This was the name of my great memere.  She was a fun, adventure seeking, lively, kind woman with a surprisingly feisty and competitive side.  She was active until the very end into her 90s.  She frowned upon being contained in any way.  She was a traveller and also full of love for everyone around.   If I were to spend hours upon hours with someone, Yvette would be up there.  I’ll be with Yvette the P5 what…ten or so hours a week for a while?!  So there’s meaning behind the pretty name.  Yvette also  means “archer” in French so I’m also loving the symbology of an arrow flying through the race courses and shooting for a precise target.
When James asked me how she rides?!  I said… 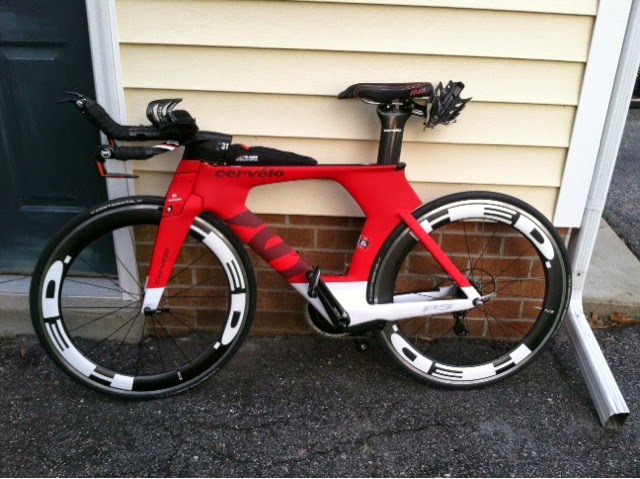 “She’s FAST and light and also brakes better than anything I’ve ever known.  She’s so great to handle. I feel super confident on the P5.  She climbs great and then descends like a dream even through the downhill curves.  I think the 650s were a good move for me not just fit but also I felt no handling issues on a windy day.  Shifting is easy & seamless.  For a tri bike she’s able to really move around corners.  When I take her on a nice flat stretch she’s pushing to GO… as soon as I get momentum she just wants to fly.  The more power I put down on the flats the faster she wants to be.   This bike just demands more speed from me.  She’s a machine.  Oh, I love it!  Thank you so much!  So FUN.”
By PVD@dm1n_072415|2015-03-18T20:36:00-04:00March 18th, 2015|