Since late November all I’ve really cared about has been my bike power.  I’ve been so focused on cycling that I’ve only been running two to three times a week and keeping it all light and conversational.  However, I couldn’t pass up the opportunity to run one of my favorite local races last weekend, the Frostbite 15k. There’s sometimes upwards of 700 athletes coming out to enjoy winter racing.   I couldn’t miss it!  Bike fitness tends to transfer to run fitness and I had run ten miles a couple weeks before the race so it wasn’t too risky to hop in and run.

Last year, it was a breakthrough day in the pouring rain.  I was just a few months away from an early season ironman with months of track work and 6 days/week running under my belt.  My expectations were not high for the race this year since my run fitness took a backseat to cycling and I had spent 30 minutes in zone 4 during my ride the day before so my legs were fatigued.  It didn’t matter.   I still wanted to experiment and see how I could push on the day.  This course is fun to race and draws such a great crowd.  I didn’t want to miss out. 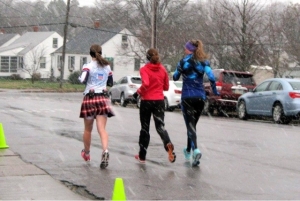 WHAT to WEAR?!
Snow started coming down about an hour before the start.  “Oh my gosh, what do I wear?!” As I rummaged through my backpack (carried by Nick) with all kinds of options packed.  I socialized with some of the 3Sports crew as well as my triathlon girlfriends, Kristen and Jax.  We did a light warm up together to get ready for the elements.   After that I decided on with capris, my “lucky” worlds 70.3 T-shirt, arm warmers, light gloves, headband to cover my ears and glasses to protect my eyes.
As we made our way outside to the start line, I ran into a former tri coach of mine and my old strength coach too.  The strength coach was NOT going to have sleeves.  Well, I decided I didn’t want to overheat and I would be super cool and tough like him so I hastily gave my warmers back to Nick.  My former coach said we were both “crazy.”  I figured I’m a tough Maine woman and I’d thrive.
I did a quick dynamic warm up and thanked Nick for coming out in the snow.  I plugged my music into my ears stood by my run buddy Kristen and tried to prep myself mentally. 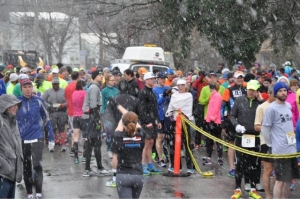 Let’s Race!
We were OFF!  I had no clue what I could do in terms of pacing.  I haven’t run in those upper zones in a long time.  I had run this last year in about 6:55 pace so that’s what I started with.  I was surprised how easy that felt for the first mile.  Then, by the third mile I realized I had overdone it and my pace dropped to 7s.  I leap frogged with one of the women I had run next to in a little pack last year but this year I never settled into a group. It was a solo run and it hurt.  My heart rate didn’t get as high as last year but I still felt like I was pushing hard up and down the hills of Byrd park as snow came down thicker.  My glasses fogged up and I could barely see but I just kept pushing.  I wasn’t over heating in fact I realized I was really cold, especially my arms. 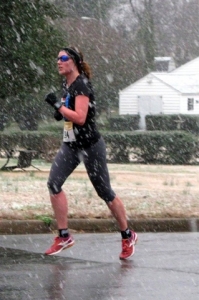 Blast of Cold, Blast from the Past!
Around mile 7, I saw Nick waving urgently but I couldn’t hear him with my tunes blaring.  I realized I couldn’t use my frozen fingers when I tried to take my earbuds out.   My hands really hurt.  Nick caught me on my way around another corner and yelled out my position.  I was in the top ten women, but barely.  I had to stay tough and make it hurt even more.
I hammered out one mile at a harder effort but I started to fade again and was passed by my speedy blonde buddy, Nancy and then another female athlete.  I kept trying to push and I saw Nick again yelling for me to pick it up and run faster.   I feel really bad about what happened in that moment.  I was pushing hard already and I thought I was at the limits and I said, “shut up!” to the poor guy. Yeah, the man I love standing in the snow wanting me to succeed deserves mega apologies!  My heart was happy to see him and he motivated me to give it even more of my “all” but the words that came out, shocked me!  Pain will do that apparently. 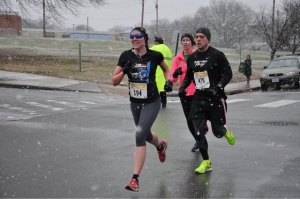 Soon,  I had some luck.  With one mile to go, a regular run buddy from 2011, Allan who had since moved out of state came up and matched my pace.  It was really surprising and relaxing, mentally to have him there even though the physical exertion pain was still there.  It was familiar running with him and it was a great reminder of the times when I feel like I really became a runner training with him a lot in 2011 before my wreck.  Back then, I thought of how he’d even came to the hospital to walk me through what my recovery would be like.  I’m grateful I had such a nice run partner in my earlier tri days and that he showed up at a critical moment in Frostbite 2016.  What a wonderful blast from the past.   I said, “Allan you have to beat me!  I’m losing top ten.  I need to chase!” Or at least something along those lines.   Allan took off hard and really kicked it in the last mile.  I fell behind him and mentally just following those familiar footsteps really reduced the cognitive strain of racing and pushing.   I was still really hurting but was able to pass a woman in the last stretch racing to place 9th overall female and 2nd place age group.  I placed 2nd last year too, so though my time was off by ten seconds per mile, I wasn’t off in placing and won $20 to lucky foot run store …and the opportunity to stand on the podium (ok there wasn’t really a podium in the school) to accept the award wearing my ridiculous great cat thrift store t-shirt. 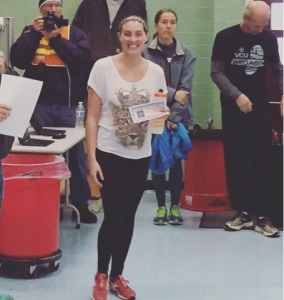