After worlds I wasn’t sure I would do Giant Acorn.  It was a tumultuous few weeks and I was tired.  However, one of my 2014 goals was to place in my age group with the Set Up Events VTS/MTS series.  I needed a 5th race in order to achieve this, which is why this race was on my schedule.  My husband and I decided we would go do “the double” both sprint and olympic races as planned, with him as the sherpa and me as the athlete for points so that I wasn’t counting myself out.  All I needed to do was finish one race, but we decided I’d still do the double, which sounded fun months ago when I signed up.  The body processes stress the same whether it is training stress with a fitness benefit or life stress with no training benefit…and I’d been under BOTH kinds of stress to the extreme in the past few weeks so really uncertain about how I would do.  However, I went in pumped and excited to be there and enjoy the day.  My goals were to finish, go as hard as I could and enjoy it.

I set up my transition and went for a quick warm up run with my teammate and buddy, Matt.  We were both chasing the series so we got ourselves pumped up for the race.  I had been marveling about how “easy” it was to pack for a local tri instead of one in Canada…well I jinxed myself as I forgot my race number belt.  Once panicked visions cleared…the ones of running with it in my hand or using (gasp) safety pins to the front of my kit the entire race, I realized the tents might have them.  It was my lucky day as Aaron, one of my new favorite bike shop guys sold me a beautiful EF red one to match my Coeur kit.  Then, “crisis” averted, Nick helped me squeeze into my wetsuit for a warm up swim.  Something felt funny in the water…oh.  I forgot to take my iphone out of my tri top.  The phone was fried & my pals teased me a bit which was hilarious I’m sure… for them. I wasn’t going to let it impact the race though.  We lined up for the swim and it wasn’t too aggressive at all.  I wasn’t able to push that hard but completed the simple, calm lake swim and ran the short distance to the bike. 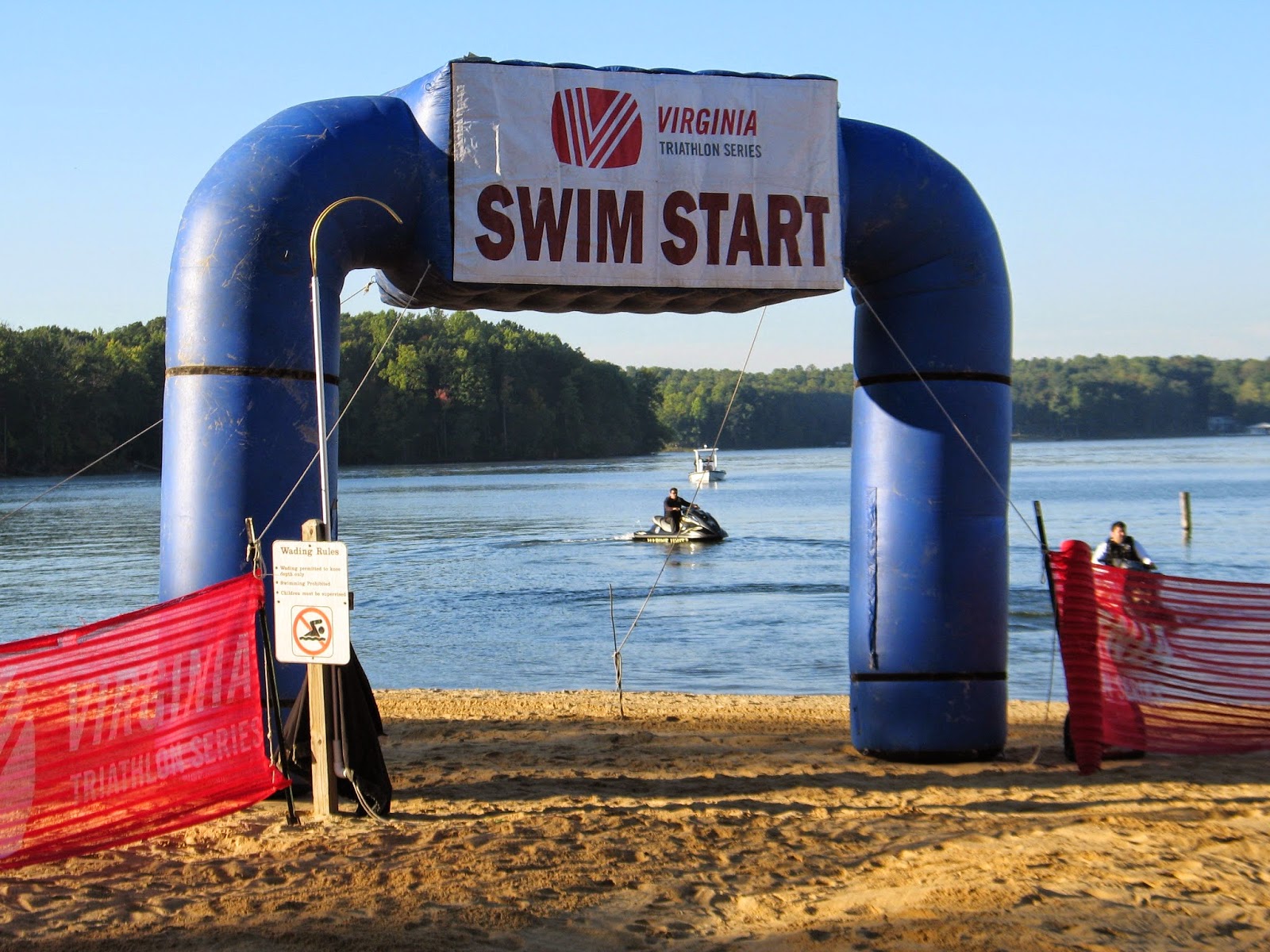 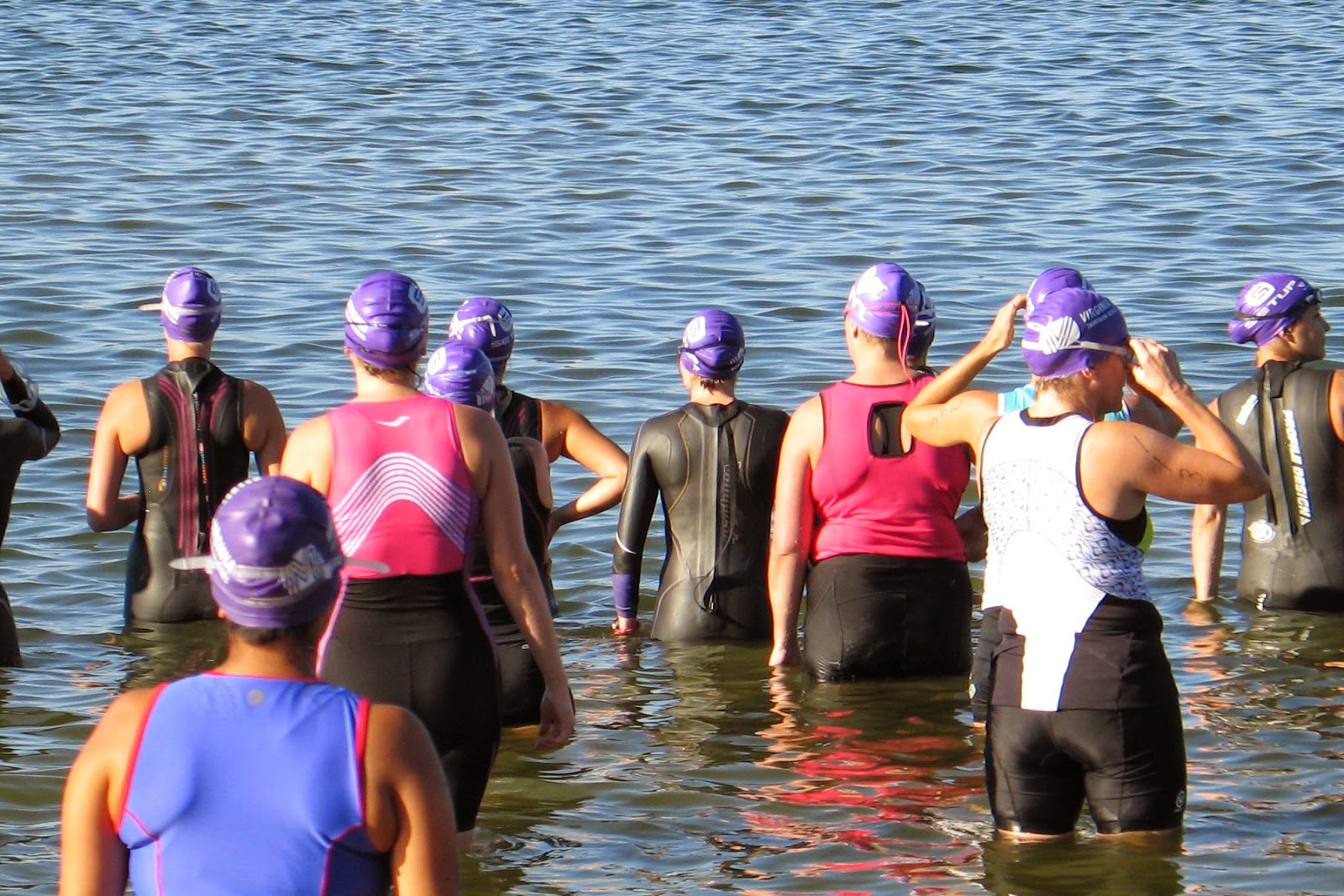 I had decided to leave my shoes on the ground rather than on the pedals for flying mounts because the mount line was straight up a steady hill that didn’t stop for the first mile.  I am glad I did that as I was able to mount the bike quickly and tear into the field…or so I thought…until I realized my legs were not working like I wanted. 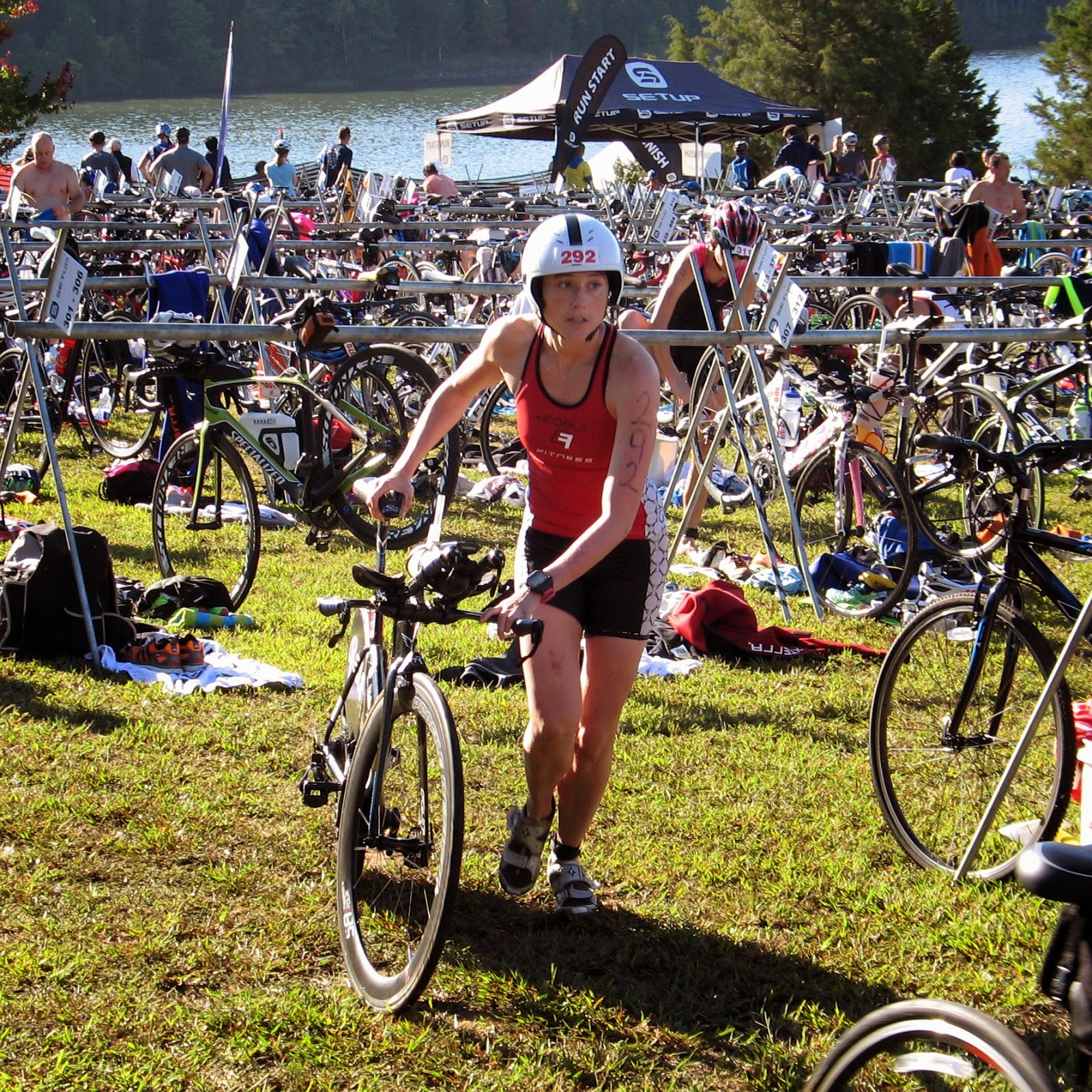 I was willing them to push those pedals into a zone 4 effort but I fell into zone 2 watts and it hurt.  The muscles did not want to turn the pedals.  The course was rolling and beautiful though, with perfect weather so I did have a lot of fun going up and down the hills.  I was just not on my game, but still enjoying the day which was a goal.  I did take my shoes off far too early after turning into the park so I think that lost me some time as I wasn’t able to push the descent for speed, but I did have a great dismount running into T2.

Off the bike we ran straight up a hill for nearly a mile.  My pace averaged in the 7:30s- which was off my typical 5K off the bike, but I felt really off.  I was dry heaving the last mile yet running through it. My body really just wasn’t accustomed to the intensity and handling the lactic acid build up from trying to push into the higher zones for longer than I have in a long time. 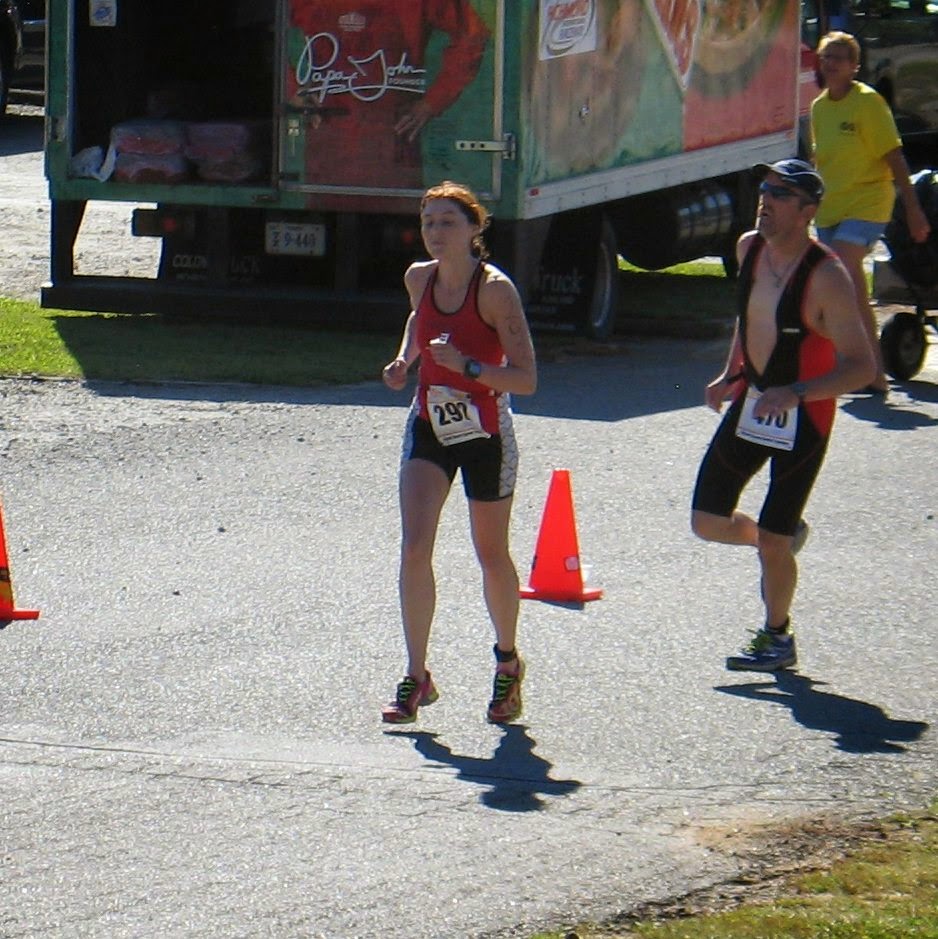 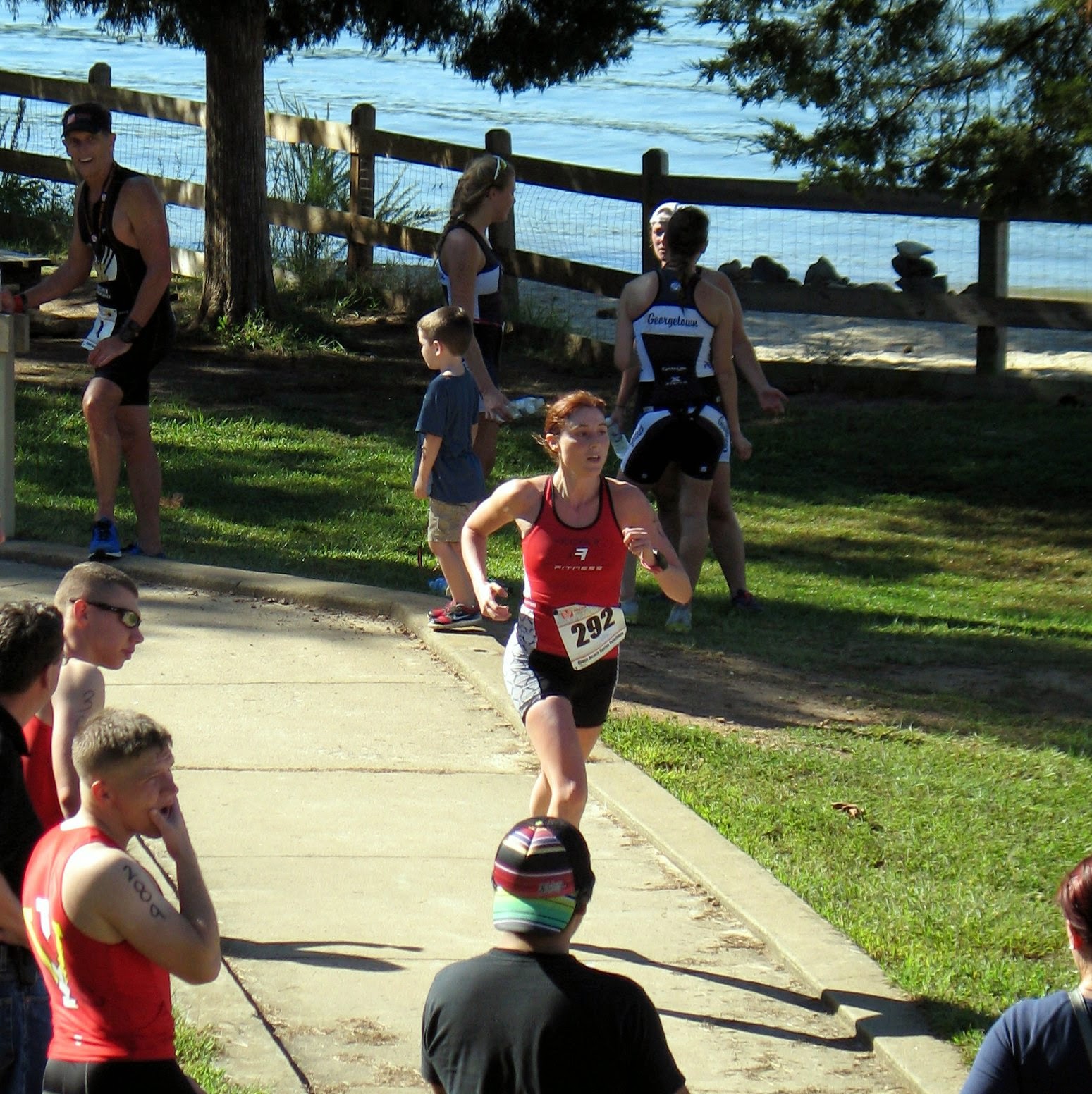 Nick and I relaxed under the Endorphin Fitness tent, until results were up.  I managed to place 3rd in my age group and had a blast while doing so.  While we were waiting for awards, Nick and I socialized and caught up with everyone.  Set up always puts on a great race day environment, and it was like a day in the park with post race pizza.  I was ready to call it a season, but my friend Emily (1st place here) convinced me to just go out and have a day of fun at the Olympic….since I’d already signed up.  Plus, Nick was excited to come back for more.  Seriously. 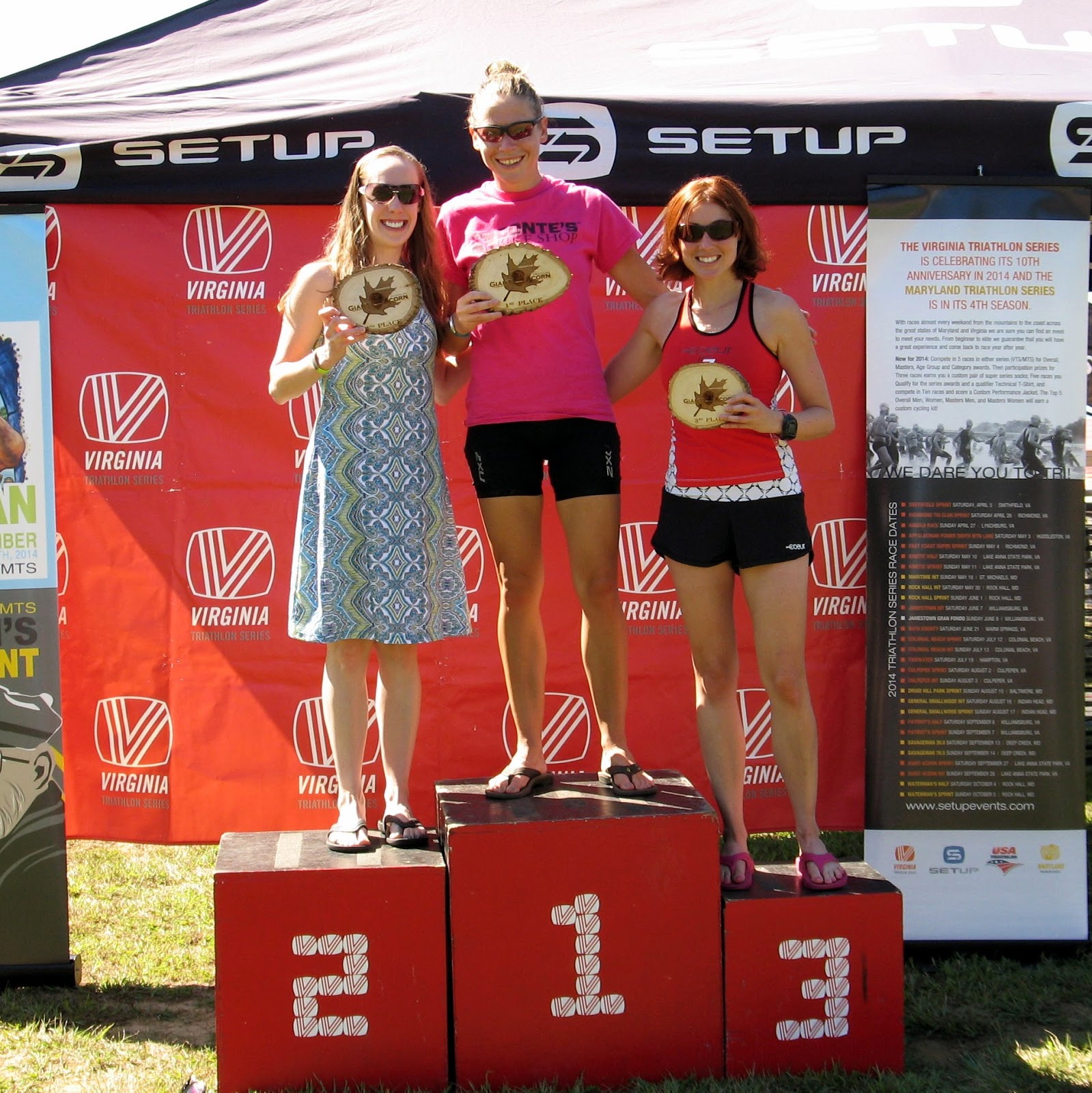