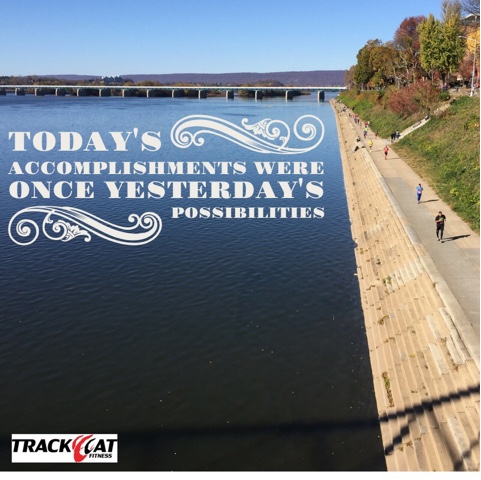 The Harrisburg Marathon did not disappoint.  Yes, I would recommend this logistically simple, well organized, mostly flat (disclaimer: there are tougher hills in the end and they come at a psychologically difficult point ) course with beautiful water views.

Years ago I had wondered if I could qualify for Boston.  I tried a few times and fell short by almost an hour.  With a standalone PR at 4:32:29 six years ago I decided to focus more effort on triathlons and table the “crazy” Boston- unicorn-chasing-dream.

It turns out more focused triathlon training and consistent work over time makes for a faster runner.  However, there are “rules” that an athlete should ride their bike more often in the fall rather than run 26.2.  You do not “need” to run a marathon to prep for an Ironman.  That is true but that does not mean you can’t do it anyway!  I decided to heck with doing all according to the “rules.”  I registered for the Richmond Marathon.  Not a typo.  There were snafus with that race, my personal life and travel logistics so I deferred and picked a closer venue.
I hoped to run with over a 60 minute marathon PR so my time goal was down to the seconds at 3:32:28.  A 3:37 was the time that qualified 2017 athletes to receive bib numbers at Boston in my age group.
Harrisburg was “only a “36” seconds slower course than Richmond according to a comparison calculaor I think is neat. 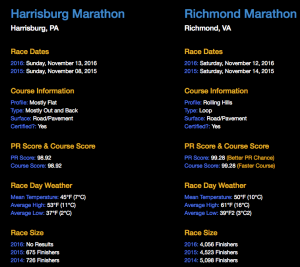 I was sold on Harrisburg.

An uninhibited enthusiasm for the marathon challenge filled my heart.  I was exuberantly training for weeks!  Gratitude for health and motivation to run a marathon fueled me.
Is a marathon harder than an ironman? Could I qualify for Boston?  I would find out.

Pre-Race!
Race week was full of life stressors.  I told myself not to let temporary emotions ruin this opportunity.  Future Kelly would thank me for keeping it kind of together.
It’s Race Day!
Nick was able to make the road trip with me so I was really fortunate for the company. I used the Road ID bread crumb app and carried my phone.  YES, phones are allowed on marathon courses!  The app streamed my location to Nick in real time.  I sent it to my family at home so they could watch me race from afar too.
With a windy course and a small field I decided joining a pace group would be ideal as I could have company and be more shielded from any wind.  There was no 3:30 pace group and I really wanted that 3:32:28.  I believed a 3:25 was in the realm of possibility based on my training.  Note that those handy marathon predictor calculators often are inaccurate due to their training volume assumptions.  Heck, the Garmin predicted a 3:15 which would have certainly caused a blow up if I had attempted that.    I just wasn’t planning to “go for broke” since I didn’t want to fade too much like I did 6 years ago but I took a calculated risk and started off in that 3:25 pack.

In the first mile they ran a 7:45 pace rather than 7:50 so I backed off but found myself alone.  Realizing a lonely run with possible wind on bridges would be tough, I hustled myself quickly to meet back with the group.  I’m sure this surge in the beginning set me up for a fade later in the race.  I had to make a call in the moment and think I did the right thing given my goals.

Running the Event!
I was wild!  I met friends!  I took a selfies!  I went after a fast time! What a rebel, right?
I felt so good running for most of it.  I enjoyed the scenery.  Sometimes I listened to music and at other points I quieted everything and listened to the sound of my feet landing and my lungs breathing.  I posted on Facebook even though I’m sure that is frowned upon in many circles. I ran next to people that would talk to me.
There were more thoughts flooding my mind in a standalone marathon than I am ever am capable of having during an ironman run.  I had more mental energy.  I’m not saying it is easier.  In fact, it was difficult to control all of those thoughts so I just let them roam free.  I also wasn’t really concerned about having a laser sharp focus for this.  It was more of an adventurous experiment for me. I was full of gratitude for everyone in my triathlon journey- even the naysayers.  How much fun is it to get out there and prove to yourself that those naysayers were wrong?  You have to be thankful for those bolts of race day mental fuel! 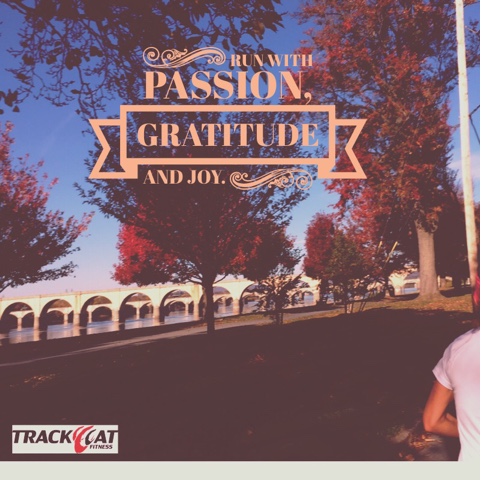 The Wall(s)!
At mile 19 or so boredom struck.  Physically I still felt strong but to me it was a mental wall of sheer boredom.  Mental torture. Worse than being on my trainer by myself in the dungeon with no music.

Nobody was talking anymore.   People didn’t look as chipper.  I didn’t like that so I made a video and  interviewed other athletes to keep myself entertained. No phones allowed during those triathlons triggered me to go wild once it was permitted.  Rules of life:  Do NOT drink and text and Do NOT marathon and video!  I felt like I was conveying the beautiful course!  The camaraderie of the race.  The joy of running and enjoying the exertion. Instead they were incoherent, sloppy disaster films.  Whoops.

There are plenty of mental focus games one can play during long runs to practice focusing on a long race. I know this.  Next time, with better familiarity of what to expect in the distance, I might race with more controlled demeanor.  If I feel like it!

Around mile 21 I experienced the “wall” of physical exertion.  By then I was no longer with that 3:25 group.  The balls of my feet were hurting as if there were rocks inside both shoes.  I ignored the pain and do not believe it impacted me as much as general fatigue did.  I was bored and hurting and I wanted to go do something else.  My legs were cramping.  I was done with all of the running. I decided the marathon was so much harder than the ironman.  I was more keenly aware of the pain.  Now, I think the Ironman and Marathon are just very different flavors of hard.

I turned my music back on.  Footloose popped up onto my playlist.  I “sang” out loud to distract myself.  I find it unusual that I was able to be caroling around the marathon course with my HR at 192 bpm at that point but it definitely happened.  After the race a couple people thanked me for the entertainment.  Exuberant is how I felt even when it hurt.

Except for mile 23.  By mile 23 I was hating the marathon.  I wasn’t sure I could break my one hour PR goal though I was on track for a BQ.  I could not do basic math.  By mile 24 there was a hill so steep I had to walk as my legs began to cramp and seize up. I saw Nick around mile 25.5.  I high fived him.
I looked at my watch and realized I was going to BQ and PR by over an hour!  Tears welled in my eyes for that version of myself 6 years ago.  I was achieving something beyond her wildest athlete dreams.  I wasn’t just meeting the BQ Standard.  I was going under 3:30!  As I spotted the finish, I kicked into a finish sprint.
I did it!  I am going to race in Boston in 2018. It is definetly one of the best race experiences I have ever had.  Though data indicated I could, I still can’t believe I ran a 3:28.  That is sub 8 minute mile pace.  I remember when I was elated to run a 5K that fast.
A BQ was a past dream that was revived and achieved.  I pushed myself, learned a lot and had an absolute blast running the marathon.  Chasing this particular unicorn paid off.  I’m looking forward to Patriot’s Day 2018. 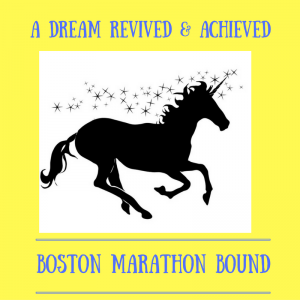 Now for some recovery!