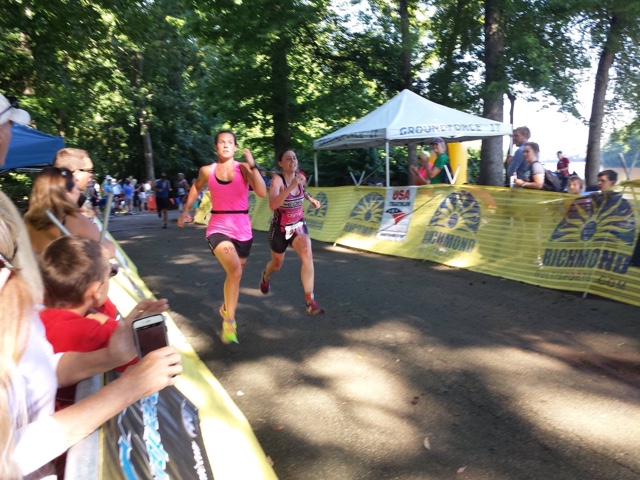 The I Love the Tavern Triathlon (AKA The Tavern) is a local gem produced by Richmond Multisports(RMS) with a welcoming and lighthearted picnic party vibe that has kept athletes coming back to race or just enjoy the scene for years.  The river swim is downstream and fast.  There is a big hill in the middle of the 18 mile bike and you get to conquer it, pull a U-turn and simply fly back down to transition.  Then you head into a 5k maze of wooded packed dirt trails out to a sunny cul-de-sac and back along the scenic river to the finish.
I did this race as a newbie six years ago, struggled on “the hill,” and hadn’t raced it since.  This year it looked good for “return to racing” a few weeks after Ironman Texas.  The timing of the race would be a punch to wake up my race legs.  I’m often worried I’ll get lost but my coach built course specific preview runs into my plan for several weeks to keep my mind feeling confident.
The race morning started off with me socializing a lot , sipping my Osmo and setting up my tri gear.   Of course , as I got ready to rolI, I couldn’t resist good naturedly picking on my “famous” twitter friend, Mat Fisher of RMS who was announcing the event .
Flash back to the winter… way back to when I spotted Mat Fisher at 3Sports bike shop wearing a hood and sunglasses because it was really cold outside.  My gleeful dark humor kicked in and after a warm hug I mercilessly teased him for being so very famous on twitter that he has to come to the bike shop in disguise.  A naïve customer chimed in, “Oh my, are you somebody famous?”
It’s worth noting the UCI World Cycling Championships are coming to town and Richmond has plenty of elite and pro athletes in the city frequently.  I couldn’t resist the opportunity to make Mat (a kind natured buddy who once saved my butt from being dropped off a group ride and eaten by a borderline rabid Rottweiler by the way) squirm.  That’s right, I’m that sweet to my favorite friends.  Anyway, I obviously had to confirm his “famous” status to the woman much to his humble dismay and mild annoyance.  I claimed he was just being shy and gracious and that everybody knows him.   It was so hilarious (for me) that I wouldn’t let the joke die.  I carried it through into social media for weeks.  So, it was amusing for me to see my friend Mat with a microphone in transition.  Flashback concluded.  You’ll see how it ties in. 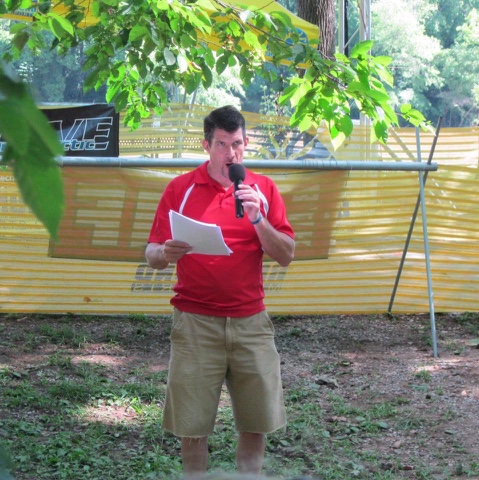 After teasing the race announcer a lot and getting my stuff all set to race, I walked out of transition through the wooded path to the swim start.  Then, I tested out the current after chatting with a few Richmond Multisports race volunteers. 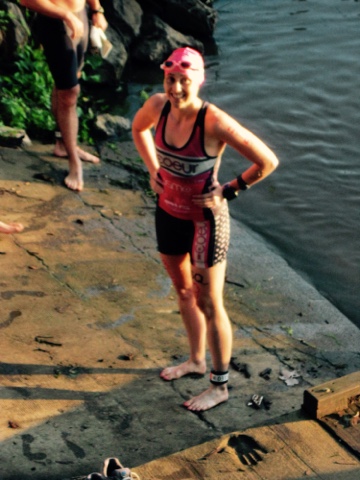 –> I started the swim with some of my favorite competitors.  We had to hold onto a dock until the start so we wouldn’t be swept away in the fast current.  That swim was FAST!  I had a great time in the swim with the river hurling all of us athletes downstream quickly to the finish steps.  I climbed up out of the water and headed out on the bike course.  One of my favorite female competitors and I (legally) leap frogged for miles on the gradual climb out to the hill top U-turn and took turns alerting people, “on your left!” as we pushed ourselves through the ride.  A few guys were riding close to the yellow line, which is dangerously “blocking.”   We are normally both smiling sweetly and are encouraging in demeanor but not to the poor boys compromising a fair and safe race.  Well, we encouraged them to move. 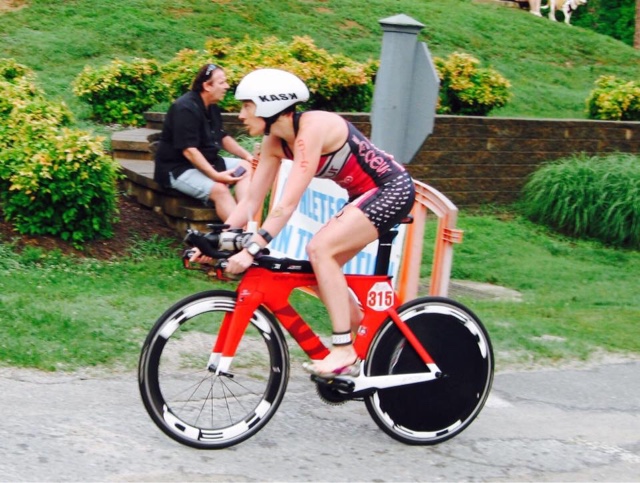 Flying down that hill on the Cervelo P5 in my super comfortable Coeur Kit was wild and fun.   My wattage was surprisingly low for me for a sprint but I gained plenty of speed staying super aero on the long return descent.  I came off the bike in the top 5 women and out of nowhere my friend, Kristen (doing a relay) joined me on the run.  There were three of us women that pushed through most of the entire run course together. Since I knew the course I wound up doing a lot of the leading and navigating.  However, my legs were still carrying post Ironman Texas fatigue and my body just wasn’t used to holding this level of intensity.
I apologize to the squeamish here but I started to gag in the last mile.  One of the girls, a quick teenager broke away from our little crew.  I suspect the fear of my possible puke gave her an added motivating energy boost.  My relay friend, Kristen and I were pace matching step for step practically “twins” with her in a pink top and me in my pink Coeur kit.  She later said she was worried about my gagging noises and when she couldn’t drop me she was timing where she stepped versus where I was looking as we wove through the forest.  I felt like I was in trouble in that last section breathing hard and still gagging at a pace that was far slower than I’d expect at that exertion level.  Kristen offered a few words of encouragement but she was also really working hard.  As we neared the finish, we navigated through some runners from later waves going into the opposite direction just starting their run.  Luckily, they dodged us readily since Kristen and I were digging deep and these oncoming human obstacles were just adding to our challenge.  We were focused and intent on giving it everything we had.  We passed the race director, Andy  who gave us a kind cheer and we really kicked it up with less than a quarter mile to go.
My body was urging me to dial it back and I worried about my stomach.  It was a mental game to stick with the speed but as soon as I saw the finish my gut settled magically.  The two of us both sprinted hard fighting through the finish line for podium finishes, her for her relay team and me with the age group win and in the top 5 overall females.  My stomach was fine and my body had been capable of working with the intensity I threw at it.  I was officially back to racing after the ironman.
My pal Casey, my husband and my coach shortly after found me sitting in the grass in my post race daze.  They wanted to make sure I was happy with the race.  The support was very cool.  Hubby and I socialized  until a crowd gathered for awards. 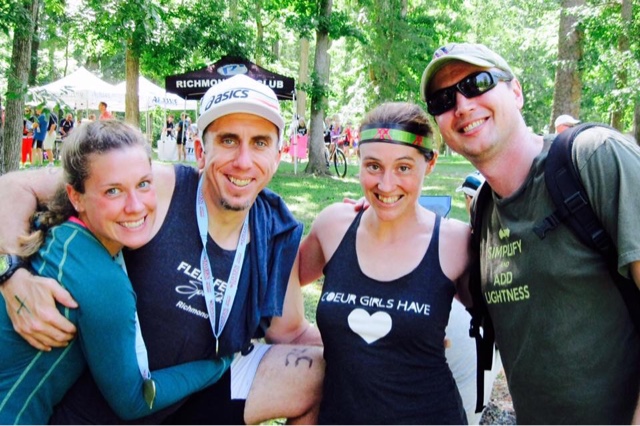 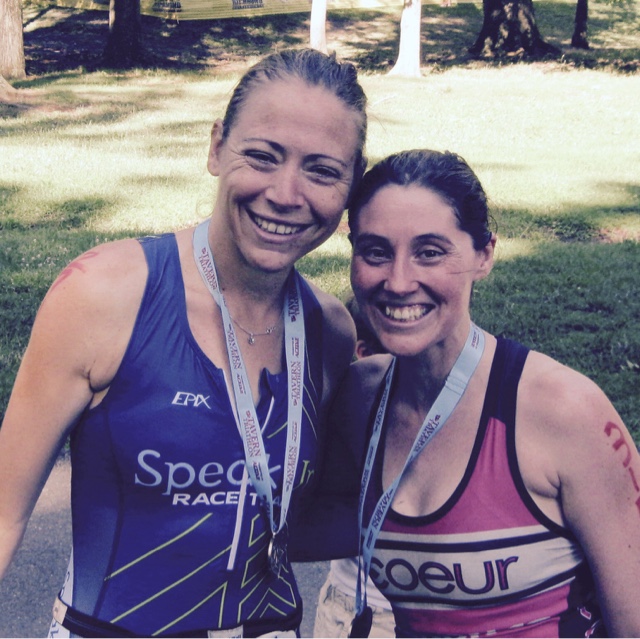 Ok, Remember my famous friend Mat, the one with the microphone?  If you are friends with a race announcer, you might want to refrain from harassing, badgering and mercilessly teasing him for months on end.  Never cross the man with a microphone.   He will get you back. It will hurt.  He went out of order announcing awards and did my group near the end.  Finally, the 35-39 women were announced.   Mat called my name (perfect pronunciation of course) as winning the age group and I climbed onto the podium steps.  Then, he carried on, “Our age group winner is famous.  She’s famous everybody!  She even has a blog.  She’s going to write a race report.  You should all read it.”  My face was bright red and I sure felt awkward and silly up there on the podium with this announcer’s funny review. I do not usually feel “shy” in front of a crowd anymore but I sure did in that moment.  A few wise guy friends out in the crowd chimed in too, about the blog.  Yes, Mat paid me back.  Well played on his part.  Lesson learned.  He is hilarious and I need to be a bit more cautious now that he’s even more involved as a leader with Richmond Multisports…but behaving could be challenging for me.   I mean, have you seen how many twitter followers he has now?  😉 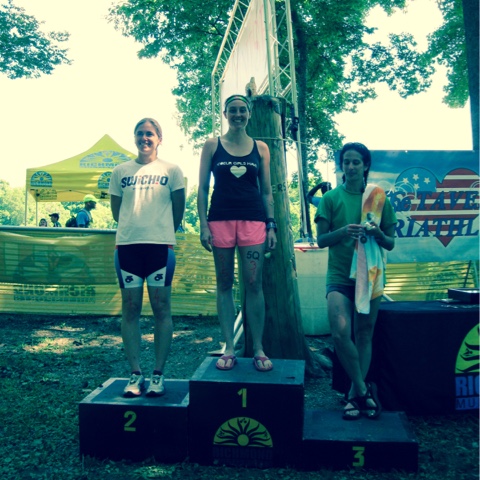