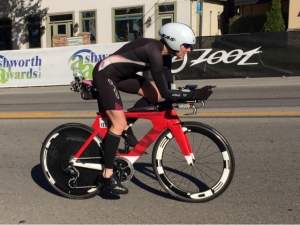 In the last few miles I heard my Garmin watch beep.  I rolled up my arm warmer and saw I had failed to take it off bike mode and the backlight was turned on.  “Low Battery.  Enter,” it read.  “OH HELL,” I hit enter.  The watch almost immediately went black.  I was going to have to run on feel.  Rather than despair, I problem solved.  I planned to grab my bike computer later for the run and try to convert speed to pace. Brilliant!
In the last 25 miles the tougher section of rollers were over.  I was relieved and happy to be spinning nonstop at what I estimated to be a normal cadence for me.  I was able to stay aero and ride fast with a consistent effort to the end.
I finally broke the elusive 6 hour split and rode 5:51 which is a huge bike split PR for me and almost 15 minutes faster than last year with the time being faster in the second half.  Considering all the stops and no power data (which helps me pace more efficiently ands thus ride faster) I couldn’t be more ecstatic as this means on a more perfect day I already have even more speed potential in me.   I knew my bike fitness was better than ever based on training but again, it is nice to be able to have that become apparent in a race!  A lot of the things my tri coach (David Tilbury Davis) asked me to do on the bike were just outside of my comfort zone and really hard for me but I am glad I listened to him.  I was off the bike 9thin AG according to the iron trac app once the rolling start was settled out.  I’ve never come off the bike in the top ten in my AG before.
T2 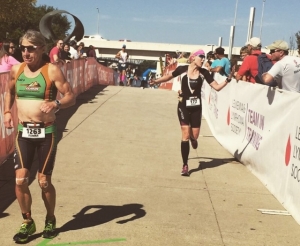 Running out, I saw Nick and tried to tell him about my power meter and my chain issues but he just told me to “go run and make it hurt.”  My friend Donna was just ahead of me all day but I had not seen her.  We unknowingly exited T2 at the same time so this was a neat moment caught before we saw each other.
Run
In the early part of the run, my quads were already feeling shot from my big gear interval ride so I was grateful for a flat run course.
I had the bike computer in my hand attempting to get it to “auto-lap” every mile and find a pace screen.   My long time tri mentor and friend, Kurt caught me arguing with the bike computer straight away.  He told me to “just run,” that I don’t need the watch, am not a robot or something to that effect.  It was a big pick me up to see him and triggered me to forget all the noise and focus on how my body was feeling.
Early on, I poured ice water into my bra forgetting that is where I stored my bike computer and despite an amazing volunteer drying it off on her T-shirt, I appeared to have fried it as we got a blank screen.  I was running with out guidance. Nevertheless I did the best I could, stayed in the moment, adapted.  I didn’t like it though.  A few times I whined to my parents, Nick, Kurt and maybe a few athletes when I asked them what pace their watch said they were running but I didn’t let it get in my head to the point that it hurt my racing.
The course is mostly flat and you get to run near Churchill Downs twice and with the two loops you get to see spectators close to the downtown area at the halfway point for a pick me up.  I love the course.  There are aid stations every mile to help you keep track of how far you have gone if you are running data free. 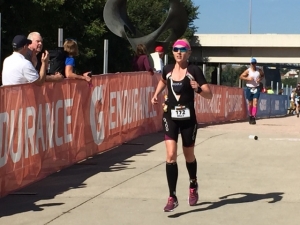 Fatigue was setting in big time around mile 19.  At this that point in the race last year my mind wasn’t as resilient and my heart was still slightly cracked from so many life stressors.  I couldn’t seem to muster the energy to run through that kind of all day long cumulating exertion pain last year.
However, this year I was so much more mentally prepared  “Just four more miles and change, ” I thought as I passed that 20 mile marker feeling encouraged although really tired.  Wait…isn’t a marathon 26.2 not 24.2 you wonder?  You are correct.  I was so tired by this marker that my mind had done some gymnastics and I believed a marathon was 24.2.  “Ironman Race Brain” is ridiculous.  At mile 24 I saw Nick.  He was yelling at me to push hard in the final two miles.  I was so mad upon realizing the finish was still so far away and the fatigue was already nearly unbearable.  I yelled at him to “go away!”  He ignored my comments and yelled for me to “make it hurt,” and “finish strong.”  No coddling and exactly the tough love I needed from him.  The athletes around were either horrified or cracking up observing our loud public spectacle but I didn’t notice.  I picked up my pace and turned my heavy legs over as fast as I could.
The End
Finally, Fourth Street Live finish line was in sight!  This is the most epic and exciting finish line of any race I have ever done.  The lights are super bright, the music is blasting and crowds on either side are cheering hard.   I ran right through it and I promptly stumbled nearly falling over from fatigue once I was past the line.  This is common so the race has “catchers” to help you.
When you get that that feeling of crossing the finish line knowing you gave it your all and did the best you could with the circumstances of the day it feels incredible.  That is what it is all about.  It is about who can work hard, push hard and conquer their adversities along the way.  When you succeed in doing so that feeling of accomplishment just keeps you coming back for more.   It was bliss.
We happily discovered  reviewing results that I broke 4 hours for the first time in a marathon, had a 25 minute distance and course PR and PR’ed in every discipline.  That was enough to break top 10 in the Ironman distance for the first time with an 8th place AG finish.
I hoped for a much faster run split based on how well I was running in training and what I know I am capable of but I’m still happy with how I raced with what I had on the day.
My parents met me at the finish and took great care of me.  Nick ran all the way back to the finish to give me a giant hug.  We all walked back to the hotel.  I called my triathlon coach to share my race recap because I knew he would want to hear about the race as soon as possible.   Then my family and I celebrated…maybe I’m still celebrating.  : )
I am currently filled with excitement for the next opportunity to tackle 140.6 and see how much faster I can go and how much stronger I can be.  This tri season concluded with my spirits in a colorful, bright sun-shiny place.  Well…a bright sun-shiny place of  wanting to work hard and be a bit ruthless with myself and go to depths I never thought possible as I move onwards and upwards.  I’m really happy!
That about sums it up…THANK YOU for reading and to all supporting me along the way!
By Kelly Hadiaris|2018-02-05T18:00:52-05:00October 20th, 2016|