The Jamestown Olympic distance course is flat, fast and fun in historic Williamsburg.  The day delivered beautiful race conditions and an exciting competitive field.  I’m discovering that I truly enjoy these Set Up Events series races because they are so well run.

Nick helped me set up, zipped up my suit & saw me through the day as my amazing support crew.
Swim:

We swam in 75 degree brackish water which had barely any current or chop this year.  I started near the front in the water and went off hard with a group.   Our wave had an aqua mosh pit for a few yards with elbows and bodies grappling for space but I drafted off this fast little pack until I couldn’t hold on anymore.   I was then swimming solo after a few hundred yards and navigated through the red caps from the wave ahead.
I was finally holding the intensity my coach, Michael Harlow has been telling me to do throughout the swim.  I let up a little bit on the effort when swimming to shore as the glare made sighting a challenge. Swimming hard in the wrong direction doesn’t work out well for me (ahem FL 70.3 flashback).  I followed the other swim caps to the shore and exited the water 16th woman, 3rd AG and 25:38 right on track and placing much higher in the swim than my past few Olympics.
My wetsuit slid off without a hitch and I booked it up the long grassy stretch to T1.  Seriously, this 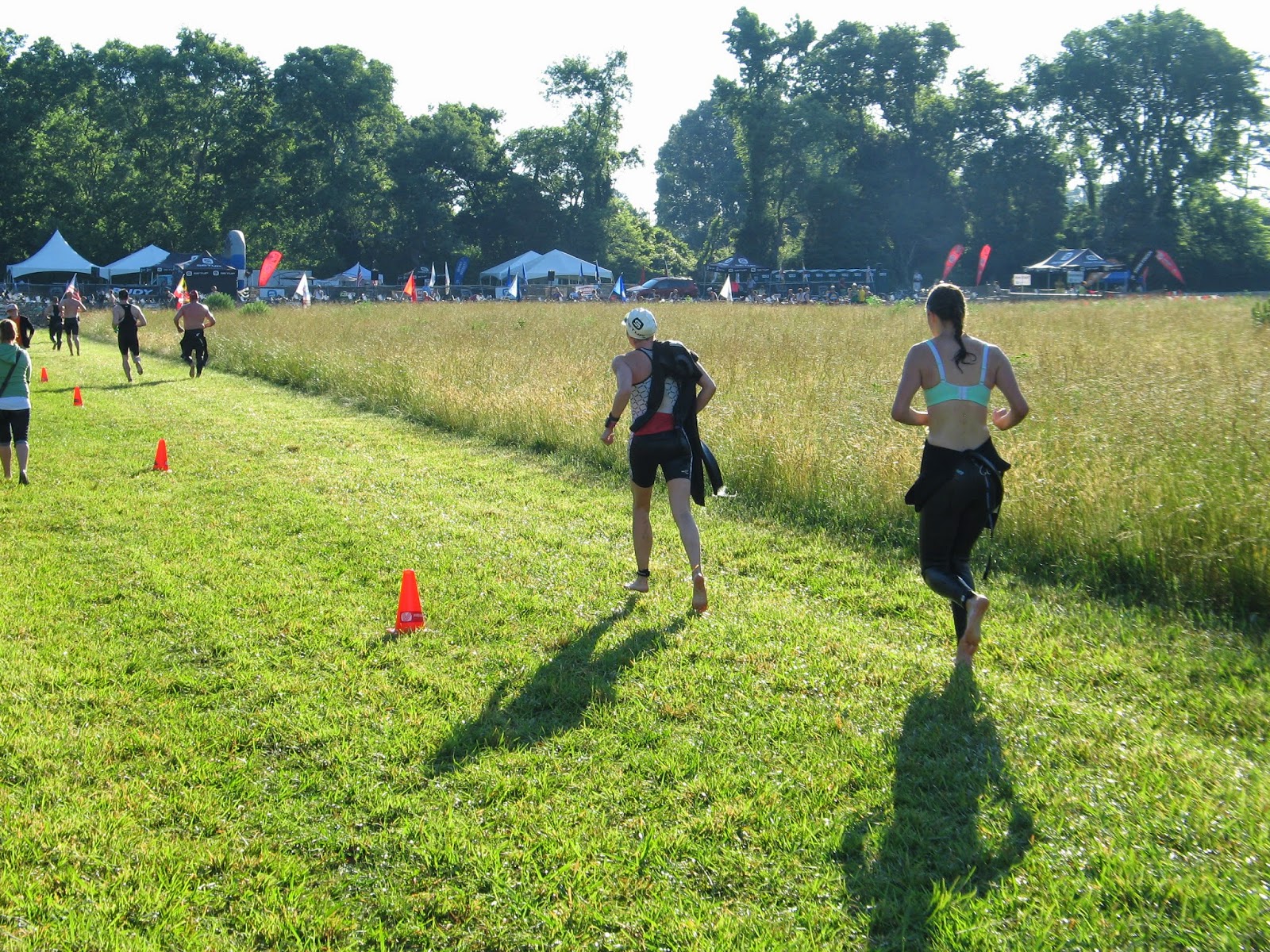 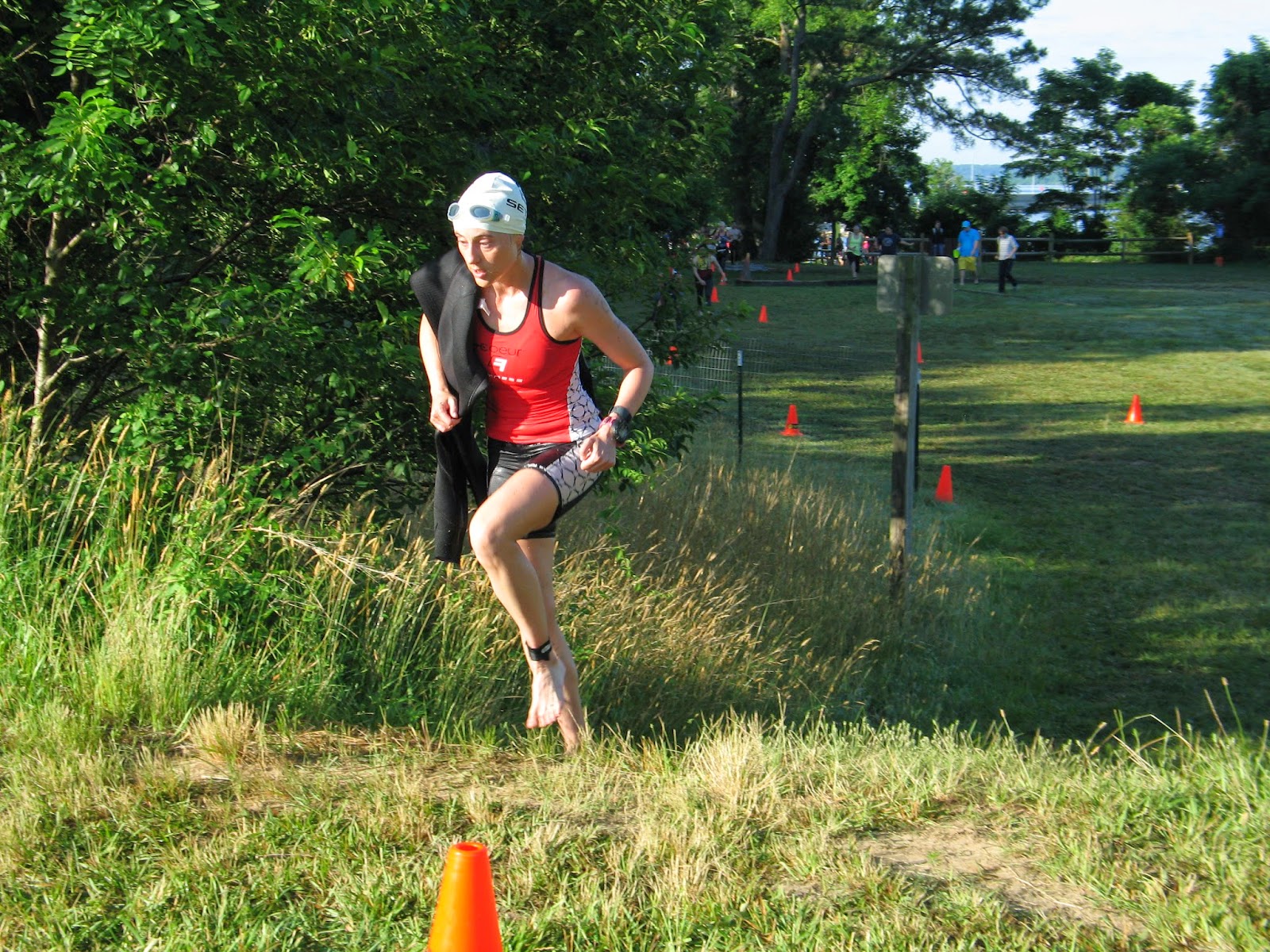 seemed to be about a quarter mile run.  (See photo).
Bike:
This was my first ride with my new Rolf disc wheel which I loved.  It’s light and fast.  I grabbed my bike gasping for air after the long T run.  Once on my bike with my feet in my shoes I began to hammer out a nice consistent wattage. I decided not to use a bento box for gels since my Coeur kit  has deep, plentiful pockets so that made my bike setup even more aero.  : )
My friend Rachel flew past a few miles in and I found Teammate Lacie along the course too.   The route  was easy with stress free smooth flat terrain.  My only negative experience was that I did wind up calling out a guy for drafting off one of my fellow competitors in the 30-34 F AG.  I encouraged her, “don’t let that boy draft you” and we women had a fun time racing fair.  He was clinging to her wheel shamelessly then played leap frog but wouldn’t admit it of course.  I also spotted a few small draft groups.  It’s  really aggravating to see things like this, but I know I need to just deal with each situation as they come up.  I let it rile me up on the race a few times which isn’t good for my own race.  Otherwise, My HR and wattage were right on track and I found the course simple and fun with only one slight hill on the bridge.
1:03 bike, 2nd AG and 4th OA woman. 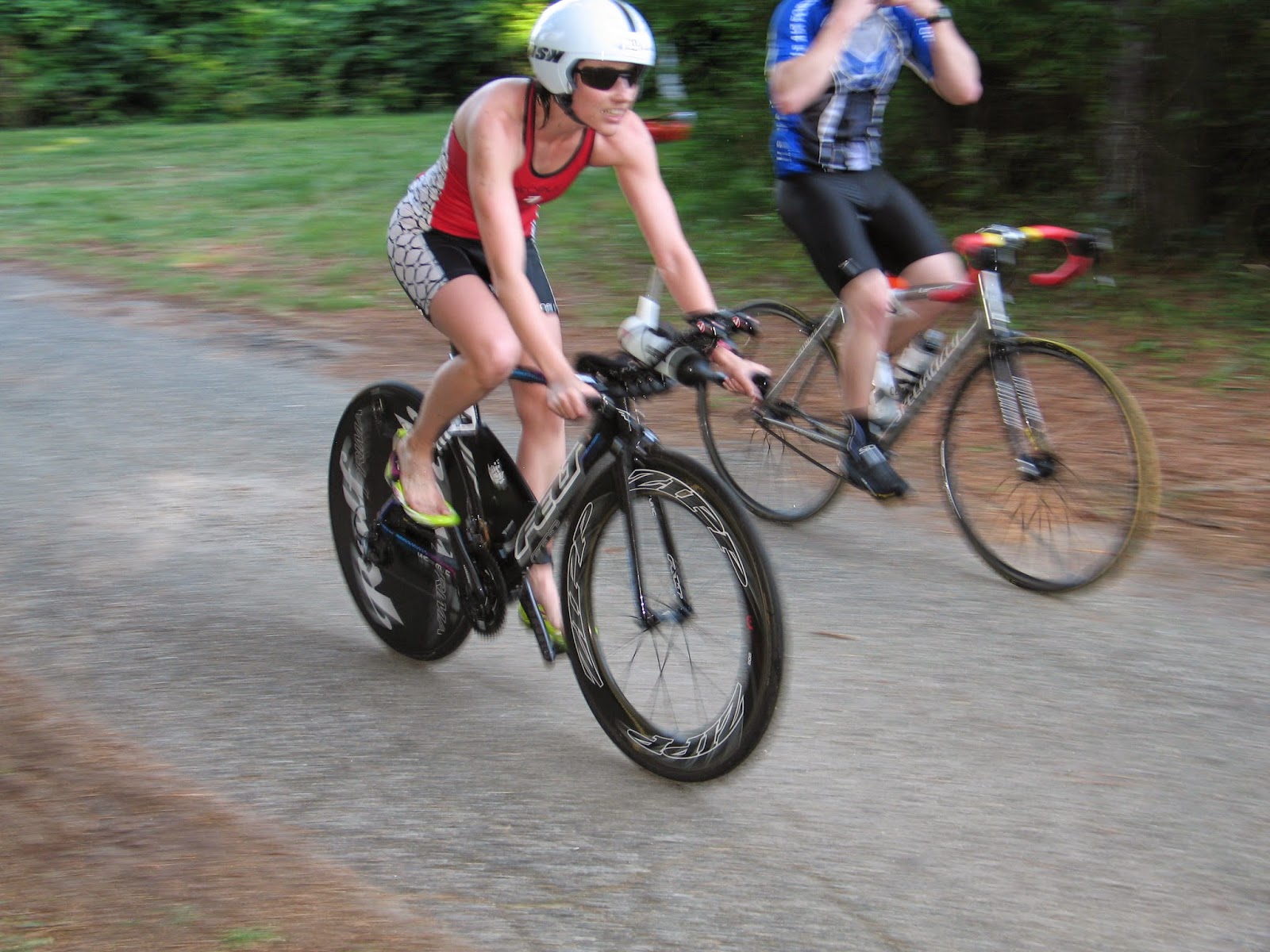 Run: The run had a mix of sunny paved trails and portions under the shade of trees over crushed rock/dirt.  After pushing so ( appropriately) hard on the bike I was still able to hit my target run pace and put out a nice 44:48 10k.  Seeing my friend Bernie in the last mile helped give me that final boost it the finish.
I wound up 6th woman and 1st AG.  The awards were very cool monocle glasses in a wooden box.

After the awards, Bernie cooked an amazing recovery lunch at her home for a few of us athletes to enjoy as we shared race day adventure tales. 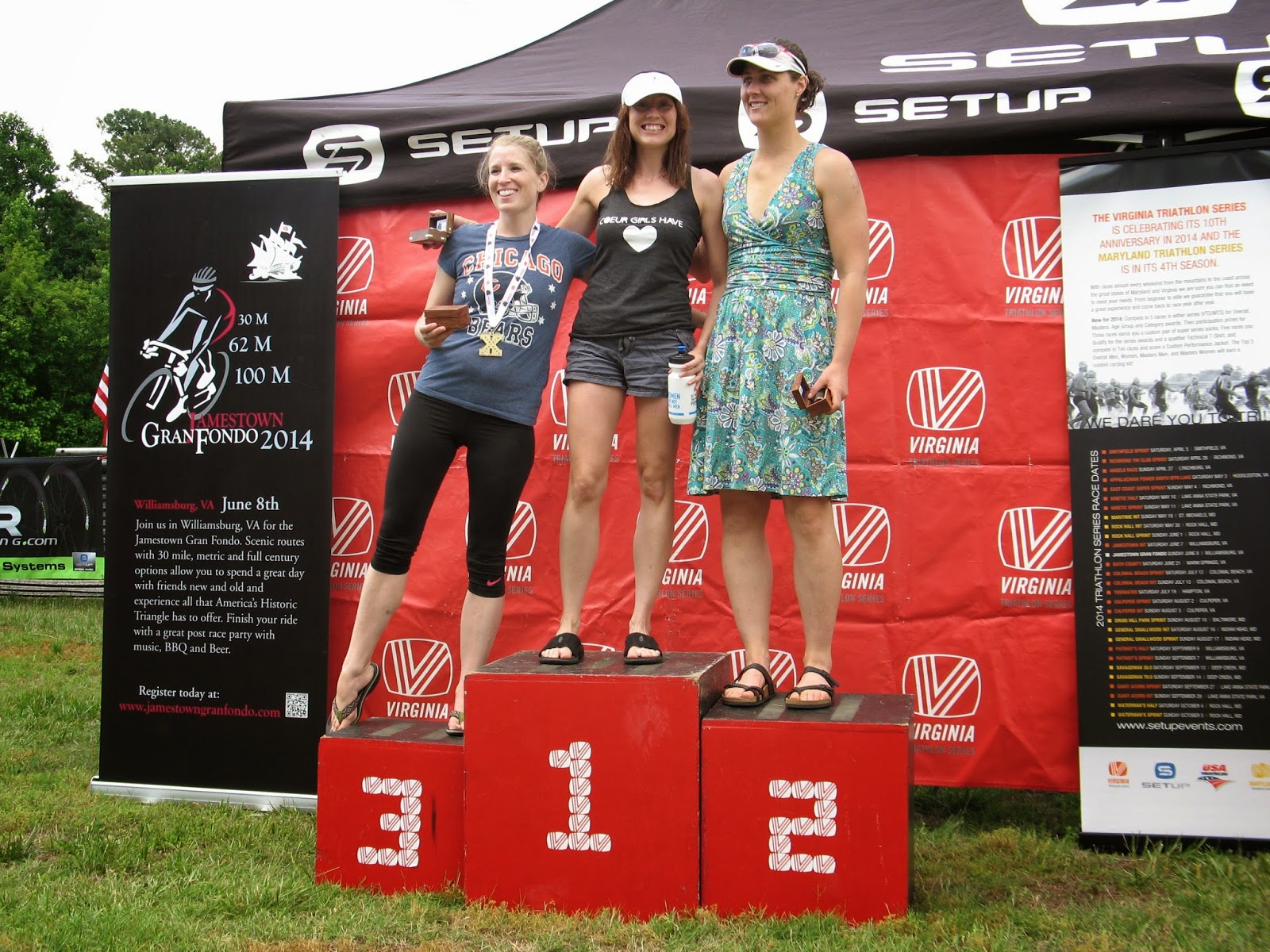 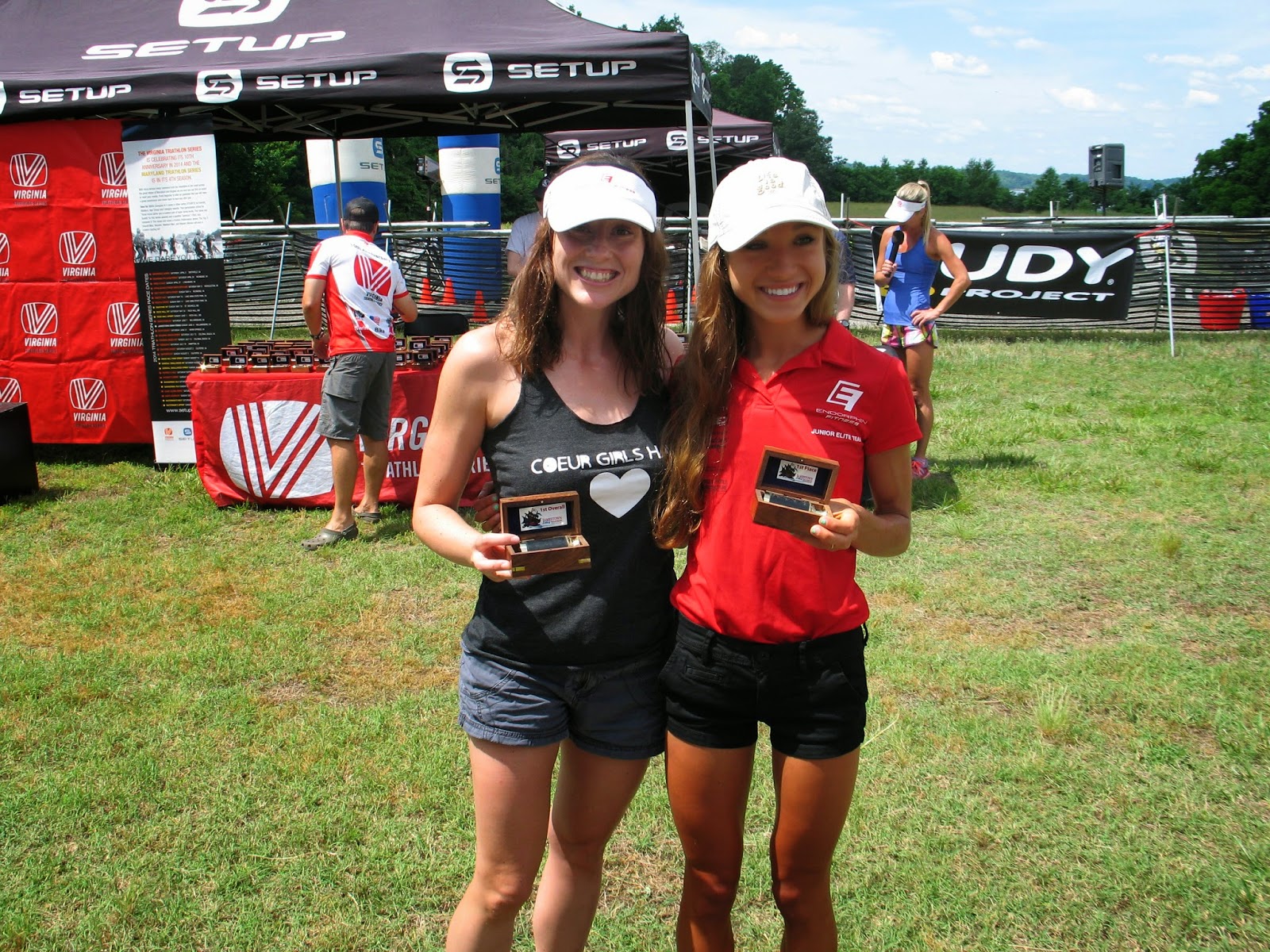