The weather this winter had been brutal.  Just a week away from a Duathlon in NC, I realized the roads were coated in ice and actual snow banks still hadn’t melted.  In the south this usually means the world shuts down.  The du was cancelled but that was the perfect thing for me because I had the opportunity to run the local gem, Love Rox 10k by Richmond Multisports instead.  This race takes place before the annual Virginia Wine Expo at the Richmond Convention Center and has options for 5k, 10k or half marathon.  I’ve definitely been to the wine expo but had yet to experience the run party beforehand.  I thought some family members from Maine were coming down for the weekend but unfortunately there was an emergency up there and they couldn’t make it.  I was pretty sad but decided to channel the emotion into the race rather than let it set me back.  Nick brought me to the convention center and I warmed up.  Look at all the ice and snow… 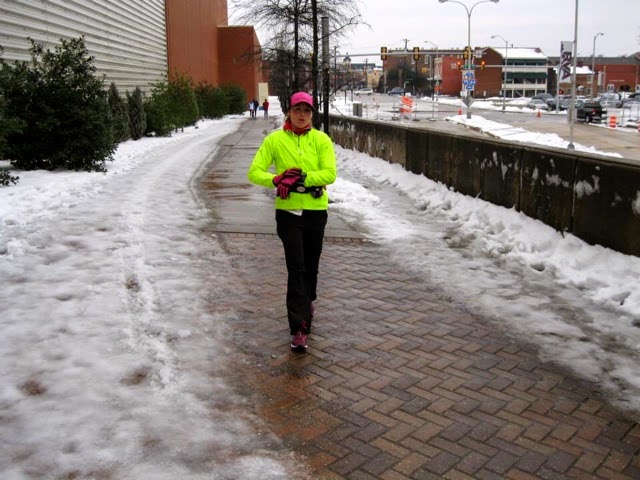 Virginians aren’t used to all this yucky ice and cold icky snow sticking around.  I loved the warm spacious indoor convention center as HQ for the start.
It was drizzly and in the upper 30s/low 40s.   That was close to Frostbite 15k weather but with less rain so I opted for my new supportive Team Coeur Sports top, arm warmers, gloves, Coeur run shorts and compression socks.  The outfit was chilly at the start but ideal for the conditions.
I did a quick warm up and then found a few friends.  I give a big shout out to Mary & Molly, my 2009 IMFL training pals for calming my nerves.  I’m still that the same bundle of pre-race nervous energy they’ve always known and they were as kind, level headed and calming as they always had been.  Talking about old times was fun and comforting.  They were like, “You’re not that athlete anymore, Kelly.”   This is a message the universe has been screaming at me for months.   I digress… I also welcome those nerves now as going into a race without butterflies indicates something is wrong with the mindset.  The anxious feeling is just my body’s pre-race excitement of what is to come.
I watched the 5k start from the glass window then got ready for my run.
At the start line, I had Nick plus my friends Joe and Charlene holding me to high standards.  Joe overheard me tell Nick my low ball 45 minute target and Joe demanded I go 42 minutes.  My VDOT indicated 42 was possible (I use the Jack Daniels calculators online) so that was my actual goal.   Joe was saying, “I know you.  You can’t hold back around me.  You better try to win.”  Then, Charlene told me I could place at this, that there was a prize purse and that I should start at the front of the pack.  I had these intentions to race really hard but I often go conservative due to what I’ve recently realized were some really limiting internal confidence issues.   The external motivation from everyone really helped me on the day.  I wasn’t seeing myself the way they see me.  My mind wasn’t open to seeing myself as a contender and it hasn’t ever been.  I had a narrative inside my mind that stuck: I was the back of the pack athlete with a mid point ave genetic base hustling like heck to hang onto the top in my age group gal’s heels so I could make my big post wreck comeback.  But that was years ago.  I would rigidly do my own race day assignments.  Stick to my own paces.   That process driven mindset is healthy in moderation but it’s limiting to be so tied down to it that I get too conservative and not even race others.   So, their belief in me, clicked something inside me.  I just needed that push. I’m not saying it’s a good thing I needed that external help for confidence…but there it was.   It came at the right time and truly I am full of gratitude for it.   I saw our local pro Adam and my buddy Shaun at the start line since we went out with the half marathon folks.  Always fun to see familiar faces.  Part of racing is the party of coming together to push ourselves.  It’s fun!
The RACE: 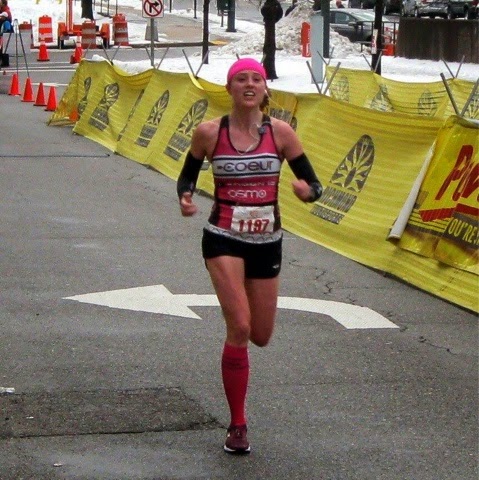 We started off sailing down a super steep hill to the river.   It was a blazing fast first mile.  My quads would burn for days but the starting race adrenaline and the bliss of top speed was so worth it.   Once by the water and through a dicey icey (but salted) patch, I settled into a nice pace.  I ran with two of the lead half marathon women (red bibs) a couple miles and eventually they dropped me.  I was paying close attention to the bibs around me and didn’t see any 10k women alread of me.  I believed I was leading the 10k women!   Of course, I know how to navigate around ice and that helped me as many were uncertain in the conditions.  They had done a good job salting the bad patches so we were fine.  The course was rolling after that steep descent.  It was tough holding 6:40s alone.  I wanted more company around me so was thrilled when I would see spectators on the course.
Around the bridge I noticed the wind slowing me down.  I intentionally increased my speed and caught two guys on the bridge.  I thought they might help with the wind if we could cluster so I tried to encourage them to run with me, but they didn’t come along so I was on my own again.  There were orange cones along the course so although I was lonely I figured I would not get lost.  I have zero sense of direction.  However, at mile 6.2 I was still running.  I panicked and thought I’d missed the finish line!   With lost confidence, I was slowing.  I even looked back but nobody was too close.  I actually got so stressed out thinking I might have missed the finish and was now doing loop two like a half marathoner that I slowed and asked someone on the side for directions.  He said it was a few blocks down the road.
At this point, my favorite local band, Dead Fame’s “Lift” came onto my MP3 & motivated me to resume my speed back and finish strong!  Big hugs at the finish. 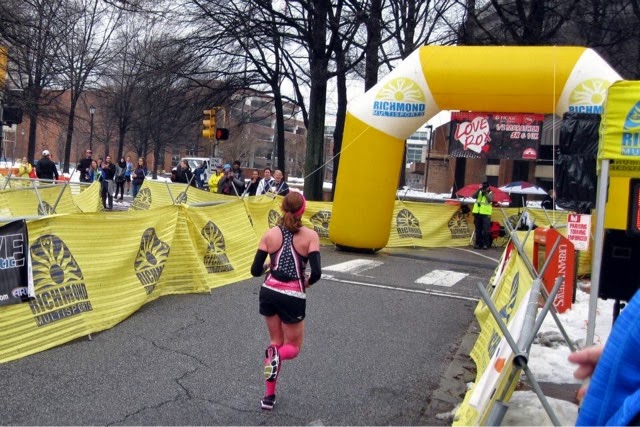 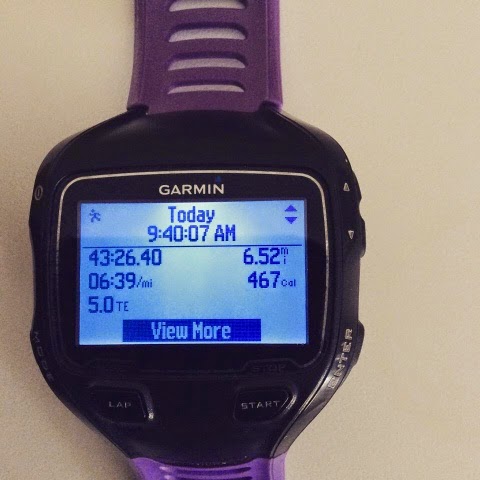 Nick and Joe thought I won.  I never saw any female white bibs ahead of me.   Yet, I was dubious.  I always am dubious.  I always ask Nick to go check my results at races and take a picture of them for me because I never believe I made it to the podium. Then, I’ll go look.  Confidence problems.   I have to work on this.  I’ve even missed awards before not thinking I made it up there.  So, when I was announced as 2nd overall, I was still delighted and thrilled.  We had waited around for awards and were content drinking beer, eating chili and socializing with friends. 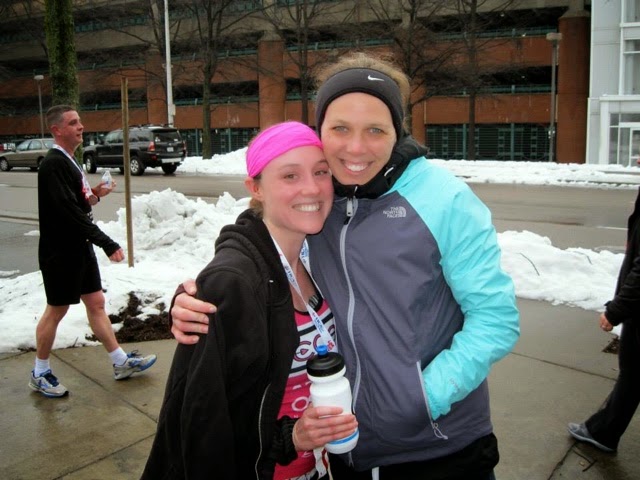 I figured the 30 minute 10k runner must have been so elusive and quick that missed seeing her.  Odd she didn’t want to stay for her award, but not totally out of the question.
However, my week unfolded beautifully because it turns out some of the runners ran in the events they hadn’t signed up for.   So, the frozen weather created a  timing glitch and the 30 minute 10k “winner” was actually a 5k athlete who switched out of the 10k.  There was no 30 minute 10k woman.
I had actually won the 10k race.
The whole RMS team was really concerned and caring and wanting to make things right on this mix up.  I got an actual call and voice message from the CEO and everything.  This means a lot.  I think it is just having the athlete centric attitude that matters.  When a company is truly looking out for the athlete’s experience, it means a lot.  I felt like RMS was open to feedback but I had none based on their quick and kind responses and reaching out.  I’ve seen other athletes in similar scenarios over the years and they don’t always receive such a caring response.  RMS made things right, held a great event and held the race in a safe manner despite tough conditions when everything else in the vicinity was canceling and closing due to the existence of those “scary” piles of snow sticking to the ground.
: )
I feel like RMS did an amazing job putting together a race when everyone else was backing out.  They aren’t sissies.  I like that.  They want to make things better and understand that we athletes come out for the party and also to push ourselves and be timed amongst the best.  I felt like it was about the athletes and I love that attitude. 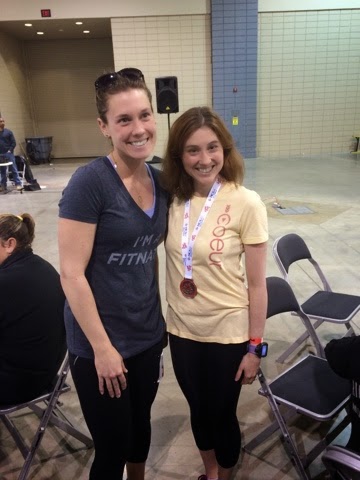