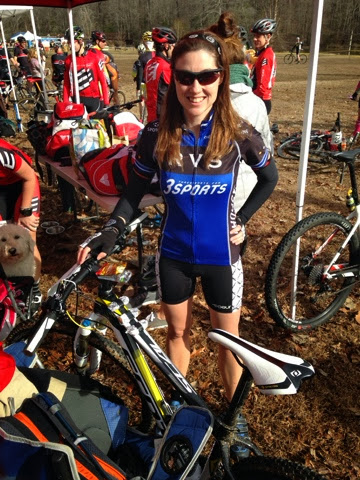 I’ve been trying to “fall in love” with mountain biking so Nick and I would have something fun to do together.  I wanted a new challenge as well and to be pushed outside my comfort zone, so I signed up for a 50 mile ride on my mountain bike.  Granted this was on double track and fire roads rather than single track, but I was stlil far outside my comfort zone going in.    However, leading in, I did not spend enough time on the trails.  Lack of time out there means I never realized I needed a new saddle AND I didn’t get comfortable slicing through creeks and rolling over rocks with people all around me.
I was focusing all winter on staying aero and putting out a consistent wattage on my indoor trainer.  The weather all winter was…ohh…oops…Excuses, excuses.  The fact is, I was not pre-pared skill-wise to be crossing creeks etc with confidence in draft packs and to top it off, I was being pulverized by the super hard stock saddle with no cut outs in the middle, which my body was just not accustomed to.  I can sit on the trainer on my TT for hours, but this MTB saddle just does not work for me and 50 mile MTB race is just NOT the day to discover this.  I am hopeful the bruising  (no joke!) will heal in a few days so I can continue training for triathlons. 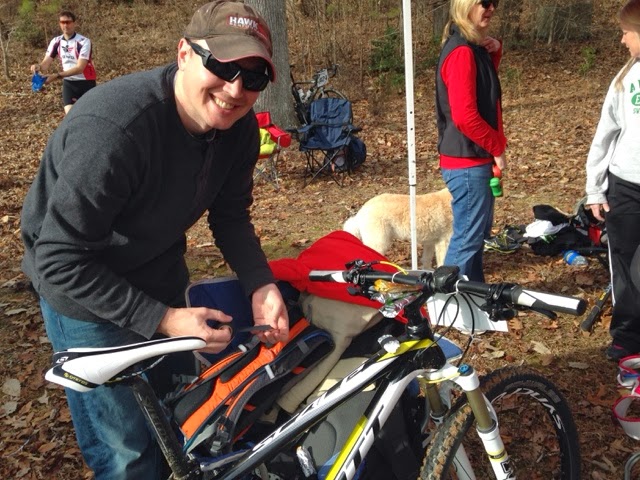 I should mention, other than the saddle, Buffy the Trailslayer, my Scott Scale, like did not disappoint and shifted with ease, climbed well, rolled over roots beautifully and kept me in control, upright the entire time and stable.   I do really love the Scott Scale…but her saddle… that is another issue.
On to the report…
The pre-race social time was really fun!  Nick helped me get all set up and we found out there were 5 unicyclists racing and of course I had to go over and gush about their bravery and catch a photo. 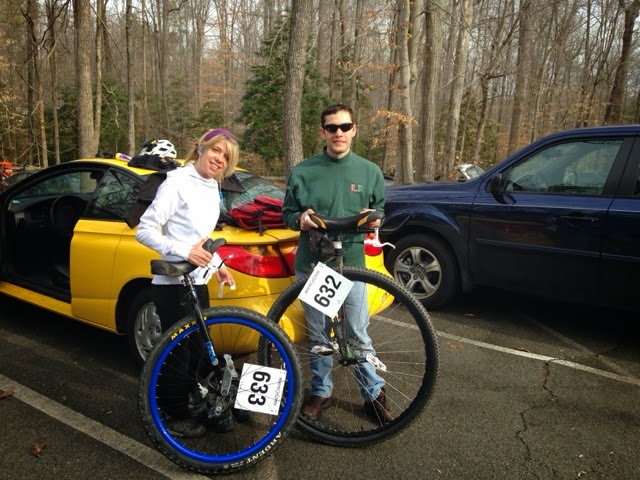 I caught up with a ton of my friends and my tri teammates at Endorphin Fitness and bike racing Richmond Velo Sport teammates. 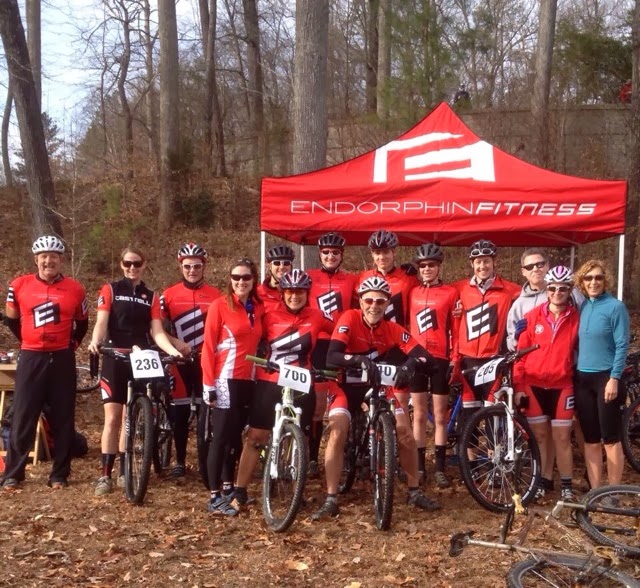 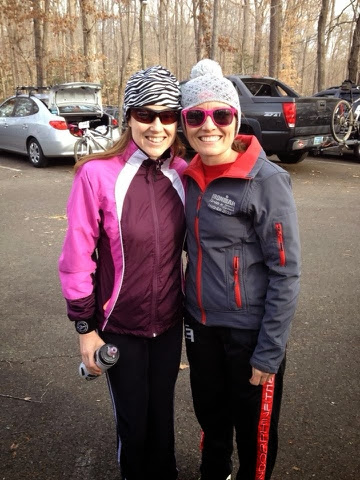 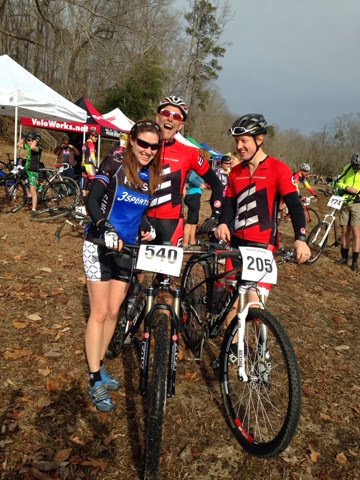 The race started off  as a mass start with a couple hundred athletes.  I perched next to Mary Ann who is also coached by Harlow. 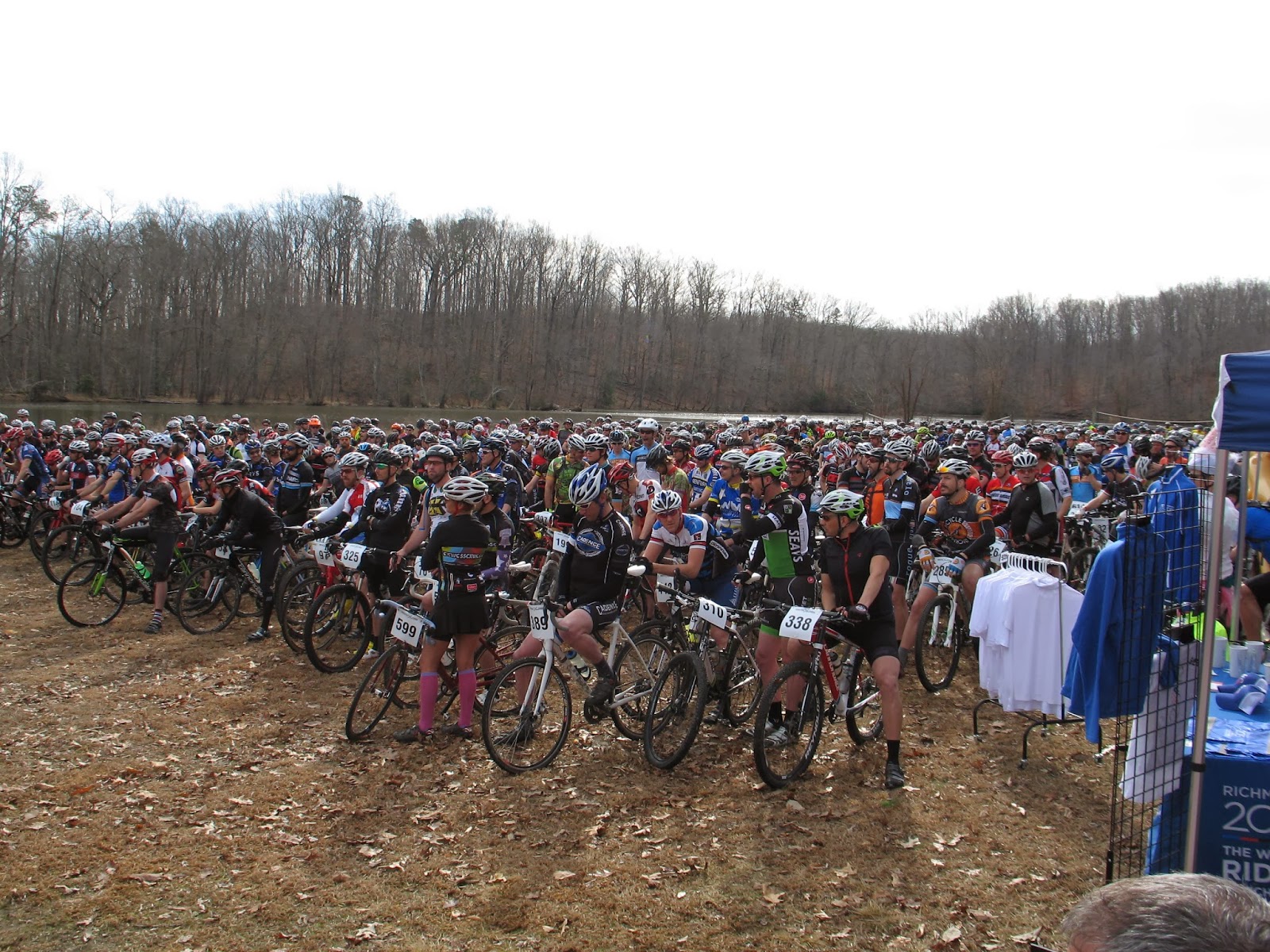 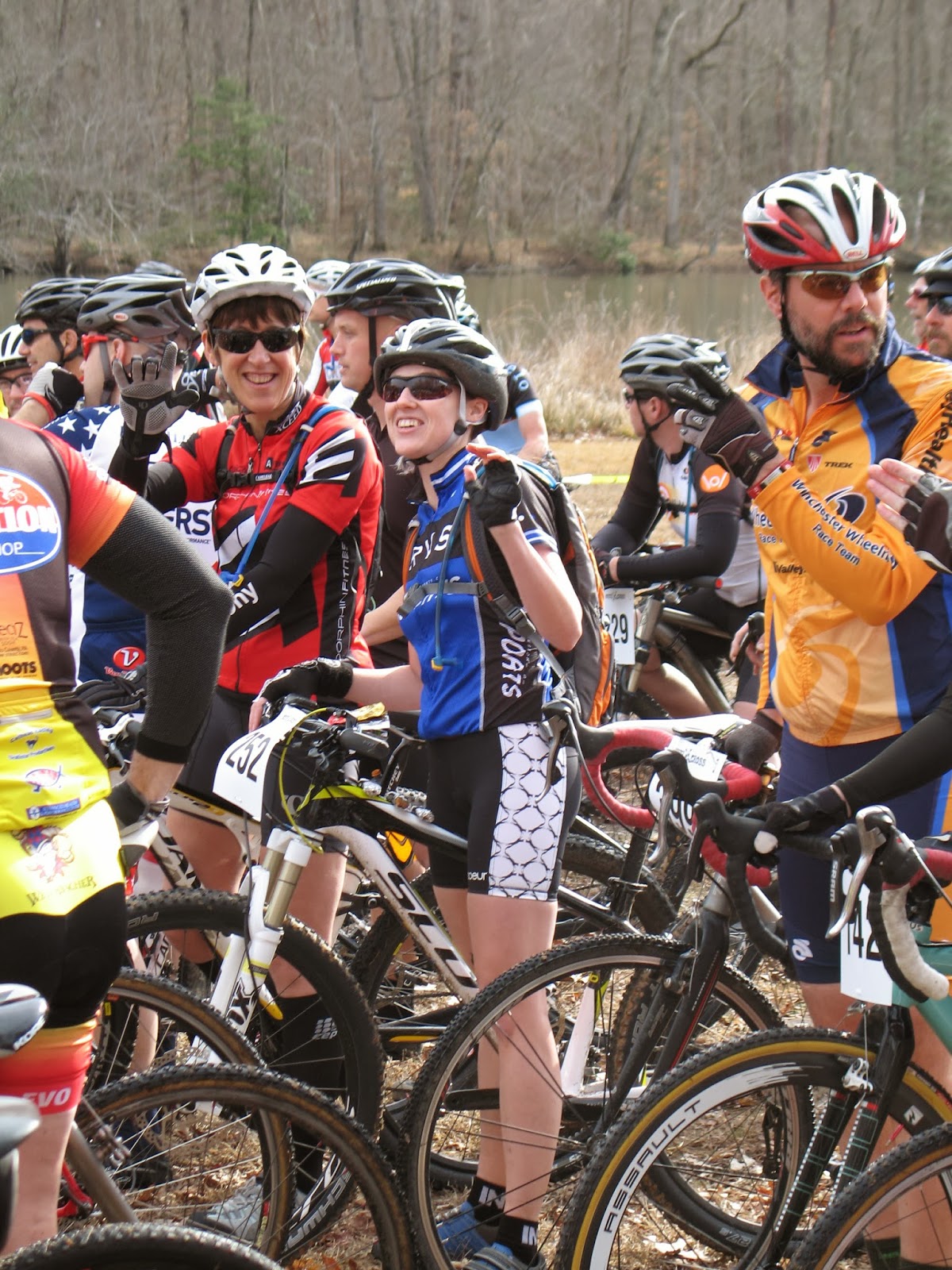 We had a great time talking and she ultimately had a great ride.   When the race began, we crawled through the muddy field in a mass start situation, slowly ascended a steep paved hill and then sped through the fire roads together in the first few miles. 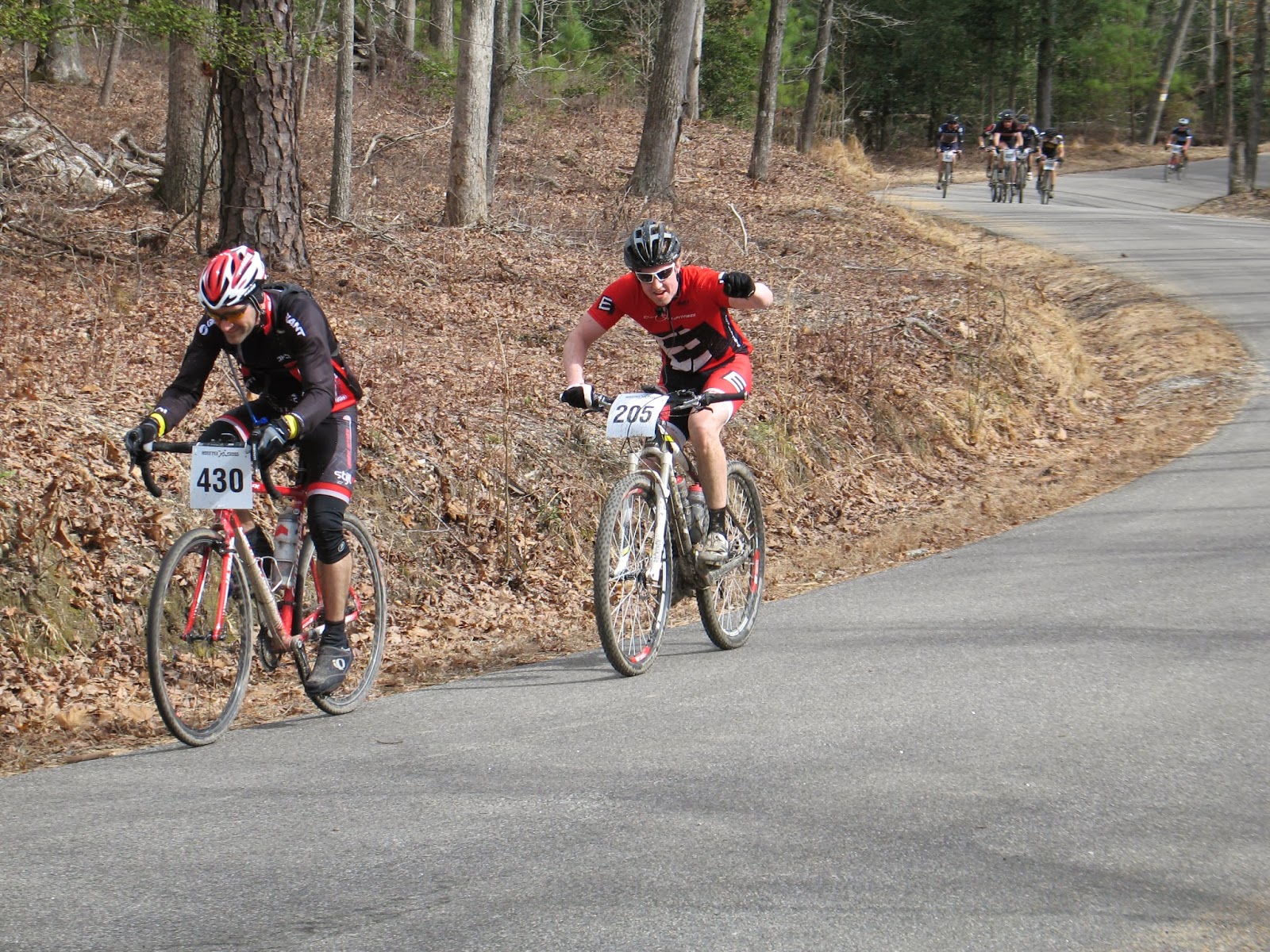 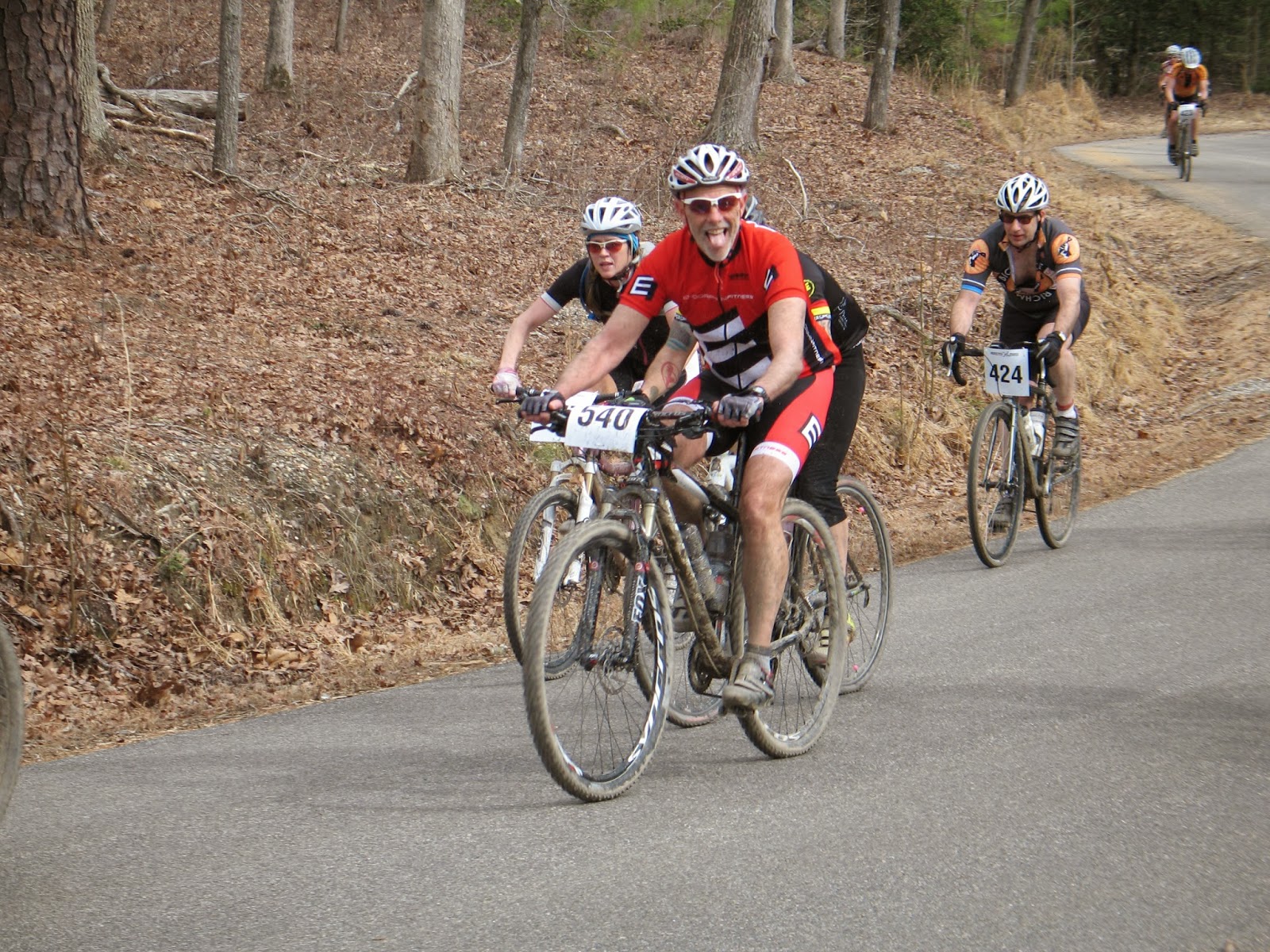 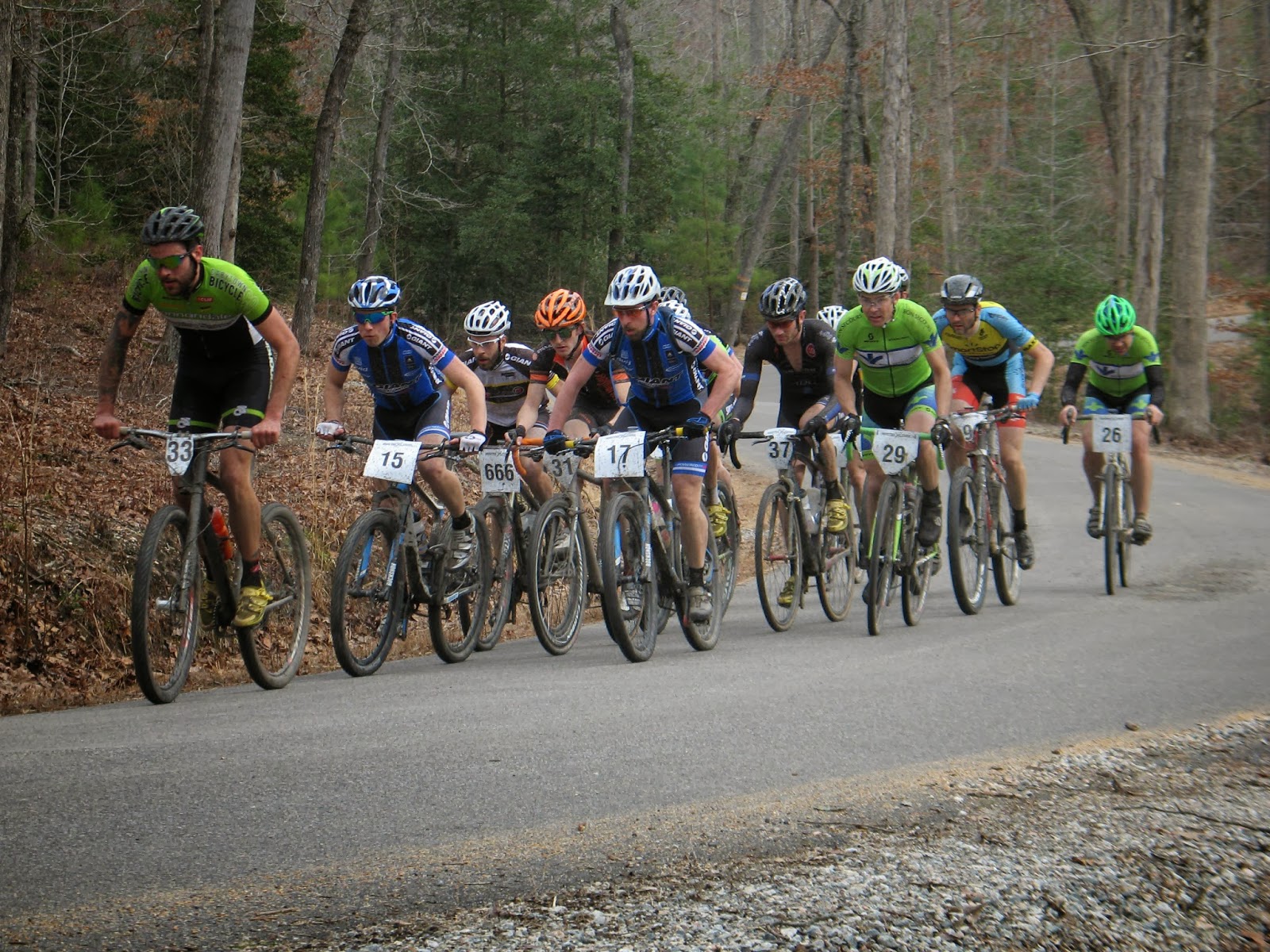 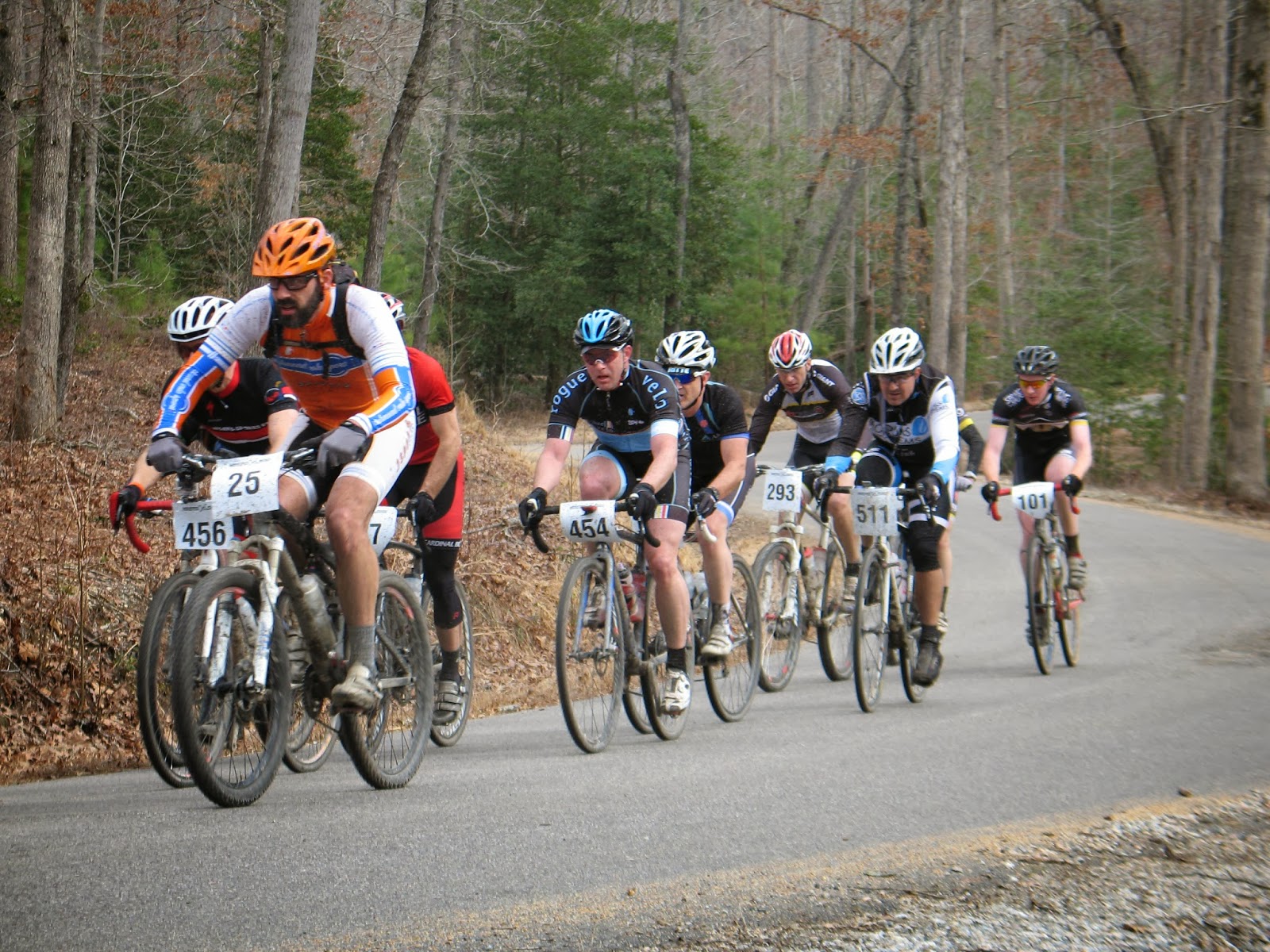 The course was VERY well marked which I appreciated.  I was hammering it with a pack of solid riders, but then they started getting very aggressive.  It was mostly men around me.  My HR got into zone 3/4  and we were flying   Then, one of the guys just plain fell INTO me and it wasn’t even a dicey section.  Everyone was OK…he bruised  the top of my hand but after that, about 20 minutes in, I got nervous about all of the wrecking going on for others and dropped back to a less elbowing/crowded pack.  This is not my sport, this was supposed to be a fun day.   I maintained a nice steady high zone 2 effort the remainder of my ride. 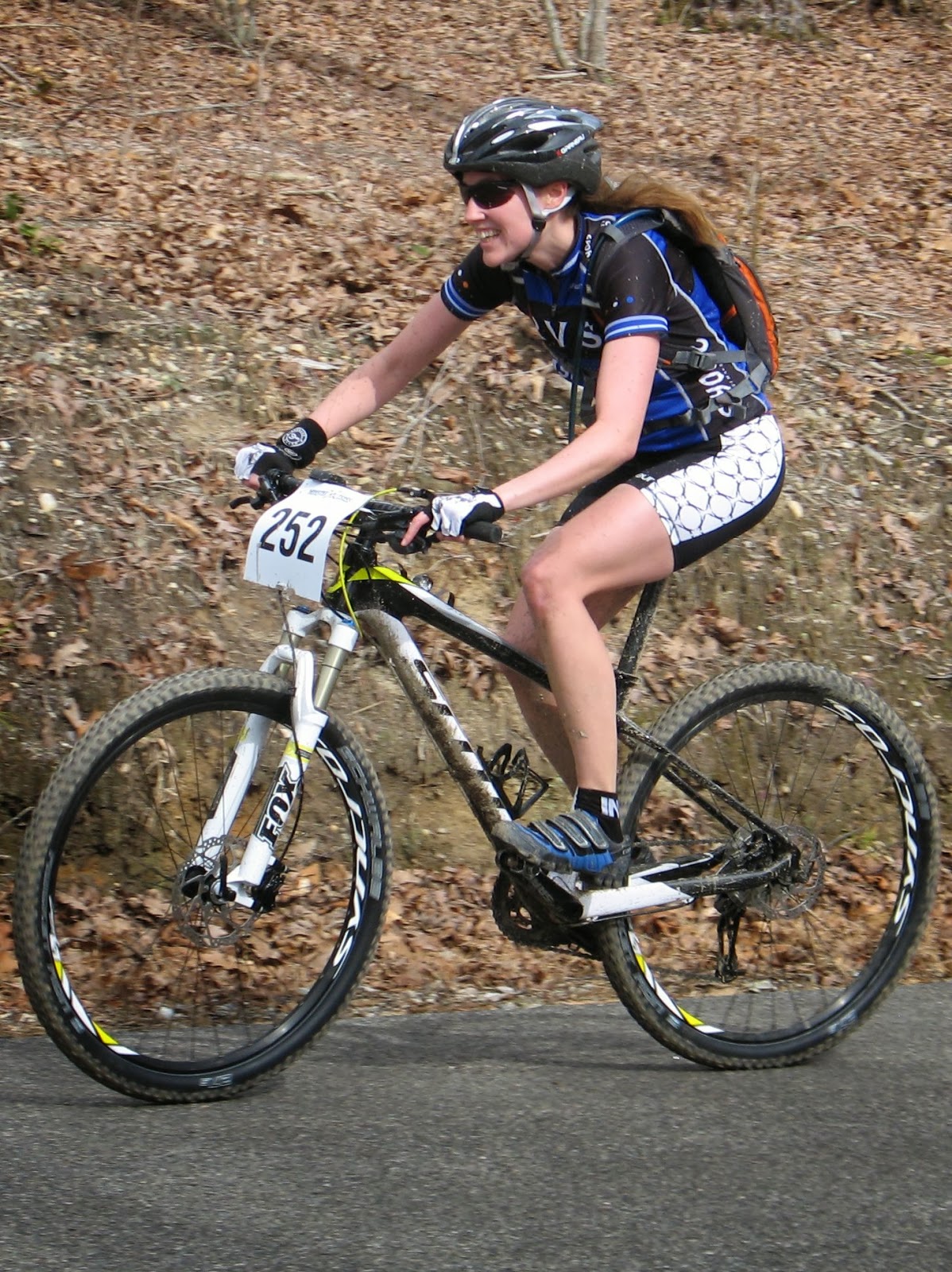 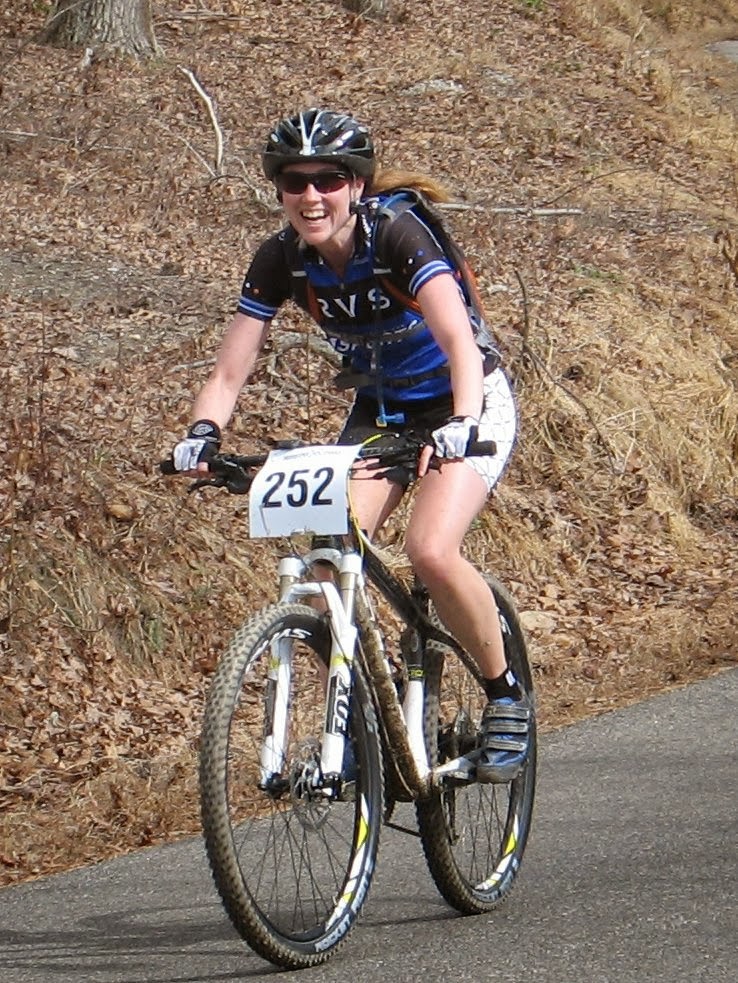 I was too cautious to be a competitor in the race.  All I could think of was Wildman and the 70.3 in April and how this was just a c race.  The good news is I had the fitness.  I was climbing really well.  My HR was in zone 3 (I thought 4- but my data shows 3) the first 20 minutes and settled into an average of mid z2 by the end of the ride.  I had no trouble making it up the hills or holding my own fitness wise on the undulating course and actually DID enjoy all the climbs over roots etc the best.    I saw all kinds of my friends out there was well, and heard my buddy Monica’s voice laughing it up and cheering everyone else through the course on one of the brutal climbs just after a bumpy creek crossing.   At one point, on of my favorite riding buddies, Jack caught up to me and we rode together for a bulk of the course which was fun and a bit comforting for me as well, seeing a familiar cyclist with predictable behavior to draft off. 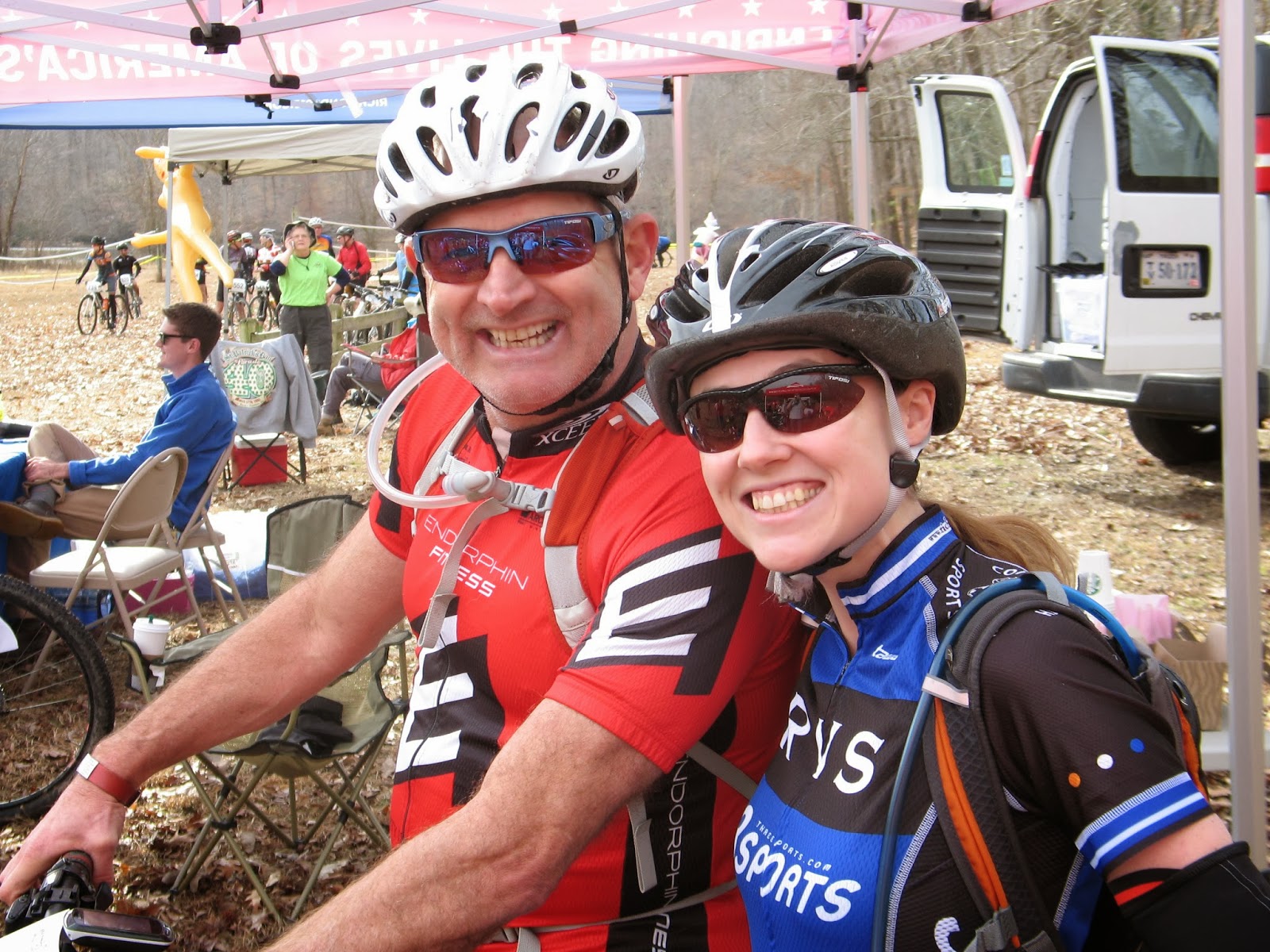 During the ride I was also grateful that pro Emily had taught me to tape my gels on my bike so they would not fall. 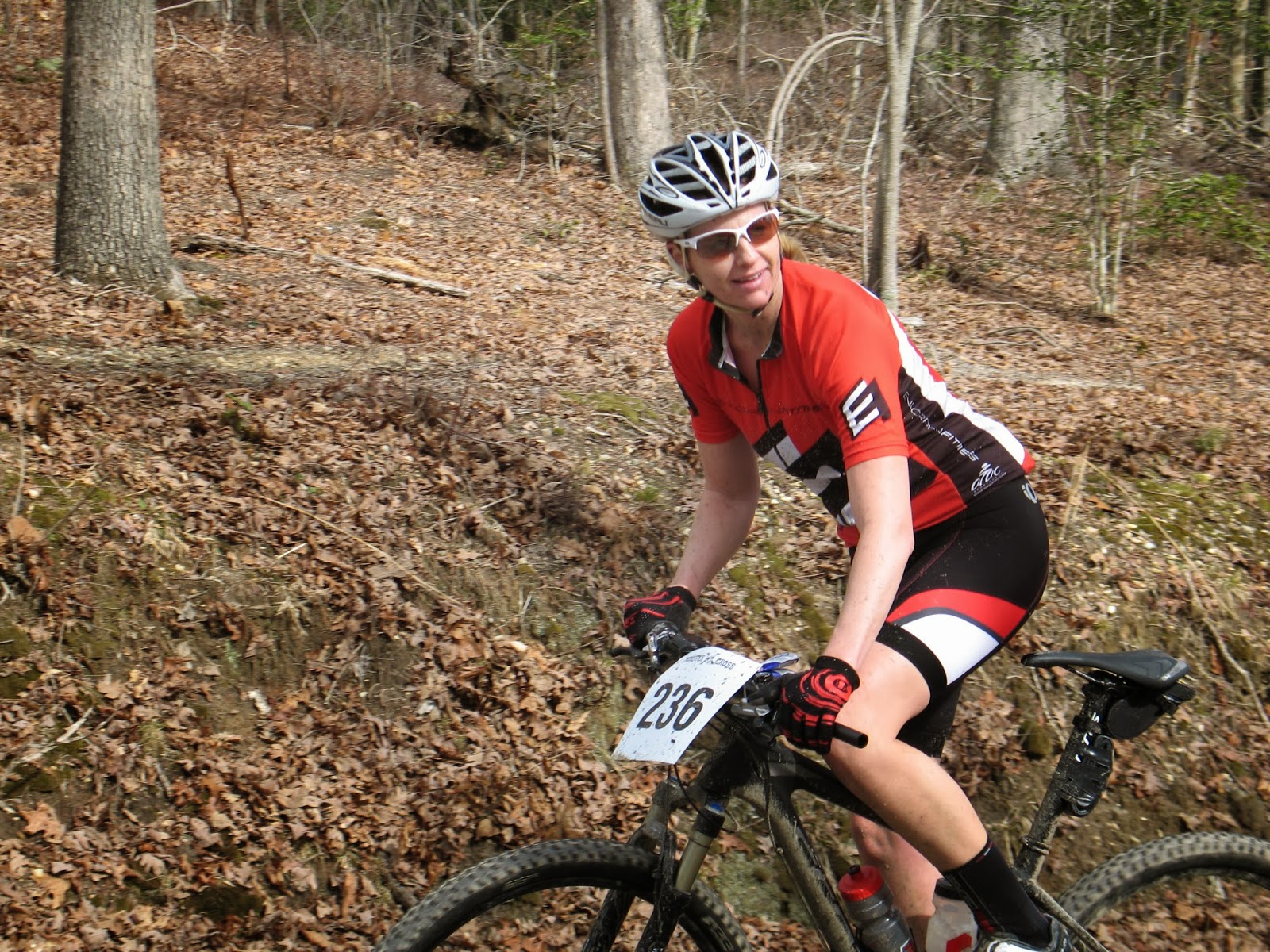 I wanted to use bars but my TMJ from my 2011 wreck acted up big time and I could not open my mouth to chew.  It’s always a reminder when my jaw freezes shut on where I’ve been (bad wreck in 2011) and how grateful I am to be alive and back in the sport.  It was definitely not a good time BUT reminds me to bring back up gels just in case for all my more important races too.
Around 15 or so miles in, we cleared the woods for a short time and there was a steep climb along pavement where I really gained a lot of time and passed a lot of people.  I saw Nick, Andy and Hailey cheering us all on.  They motivated me to push harder and momentarily forget the saddle and jaw concerns. I caught up to a pack of 3 other women and we were all excited for a few miles of girl power as we hit the trail again.
Unfortunately, here’s where my blog takes the twist of Shane… 30 miles in when looping back to the park, I decided the saddle pain was not worth the defeat of a DNF and called it a day.  Actually, I decided around mile 20 that if the next 10 miles did not go well, I would give myself and out and I really just could not wait for that moment I could get off the bike.  The idea of going another 20 miles, crossing muddy creeks, dealing with other people around me, worry about risking Wildman and 70.3  for some “C” race and having to suffer the brutal pain on my lady parts from the saddle was just not worth it to me.  I could not find the internal motivation to keep going. Could I have finished?  Probably, yes.  I’m pretty disappointed in myself that I DNF’ed (Did Not Finish)….but it is what it is.   Its not “Like” me to DNF.  In fact, this was my first ever DNF… but hopefully I will put out a good performance in my tris in a few weeks.
I have never ridden a mountain bike that far before, and it was definitely an adventure to remember despite the sad results.  I got to see a lot of my friends out there and I’m really happy for those who gave me hugs and support when I stopped.  I took off my team jersey as soon as I quit, because I didn’t want to bring “shame” to the team (a tad ridiculous and dramatic- but those were my thoughts).  All kinds of gel wrappers fell out onto the grass around me since I could not reach my jersey pockets under the camelback.  So there I was surrounded in wrappers, my helmet and shirt and contenplating what a protocol to follow when DNFing (where to hand in my chip… Errr… just pride in the case of MTB) and some fella came over and laughed at (with?) me and took this DNF photo….my least proud moment…. 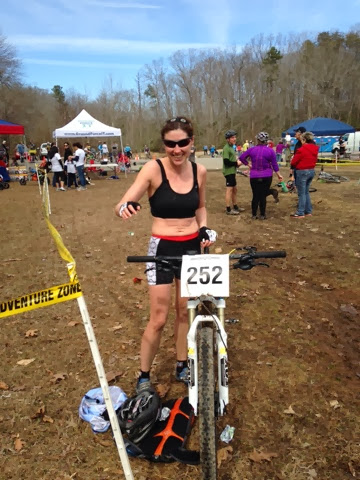 and so then I was running around the monster cross field past all the team tents in a sports bra, feeling totally awkward and silly looking for a T-shirt to borrow.

There was a mini monster 21 miler going on at the same time and I almost wish I’d switched to that race…since I hadn’t been out on my mtb long enough to know how my body would react to it over several hours.  The good news is plenty of my pals were around after my 30 mile mercy cry. 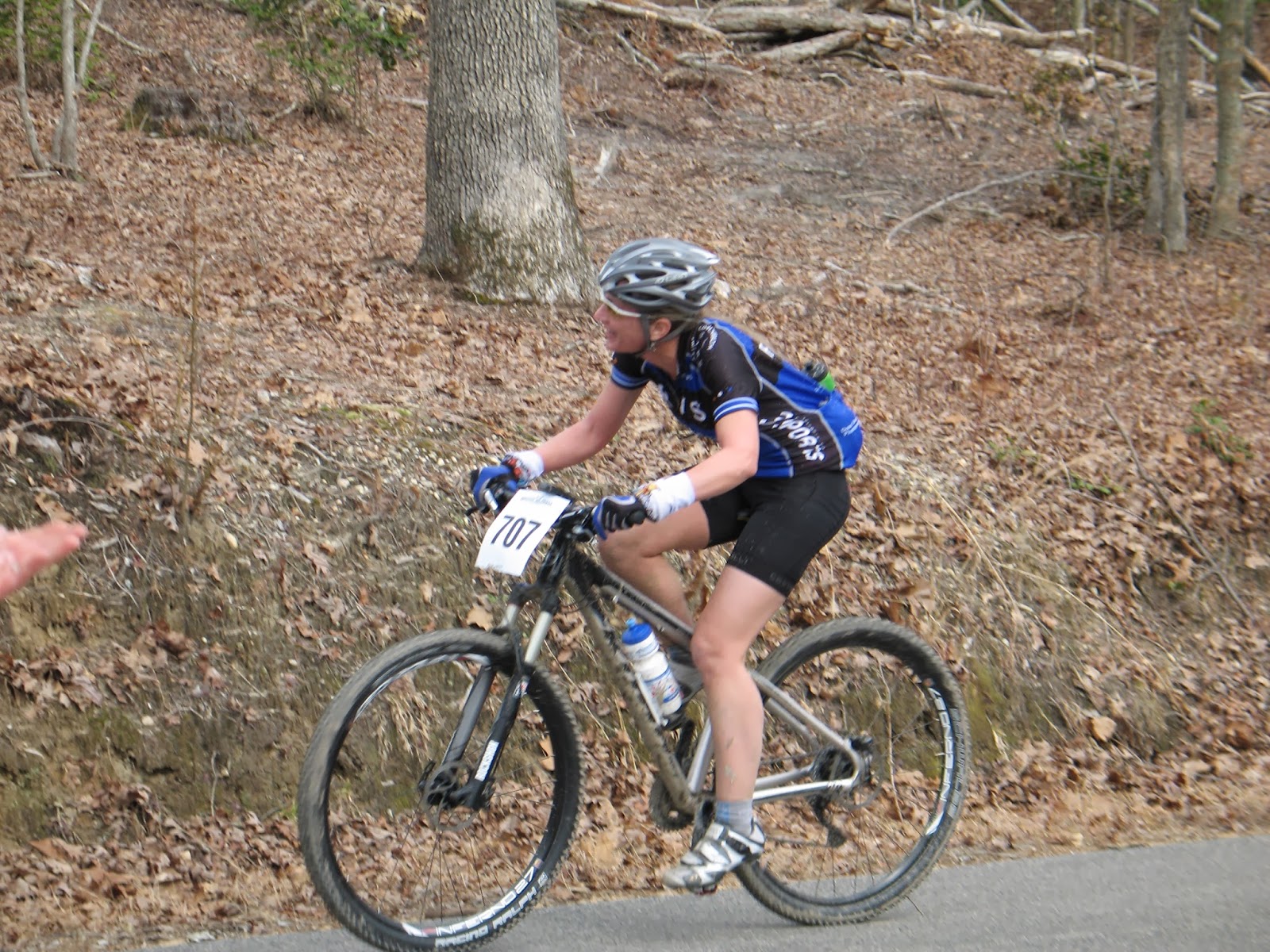 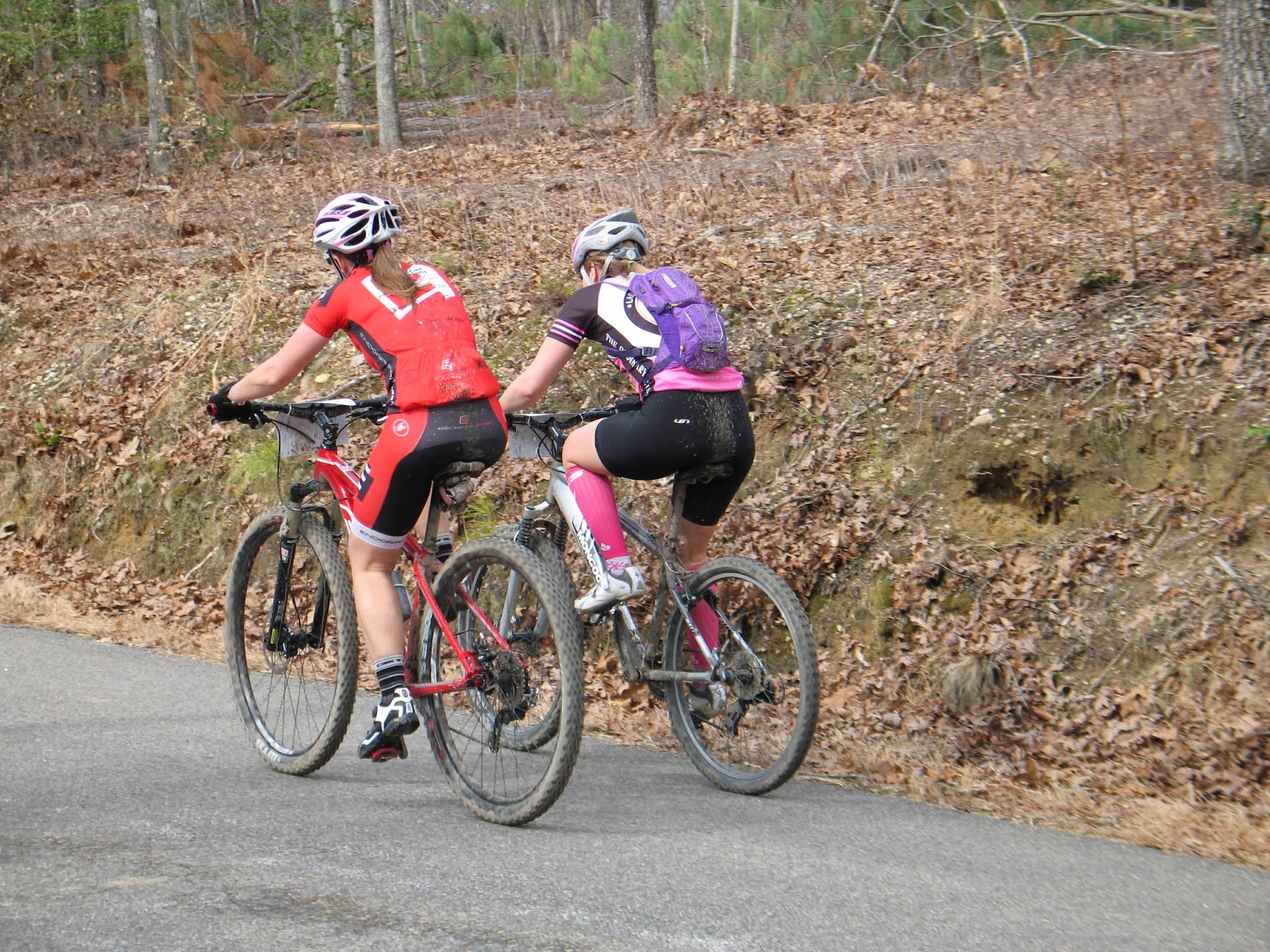 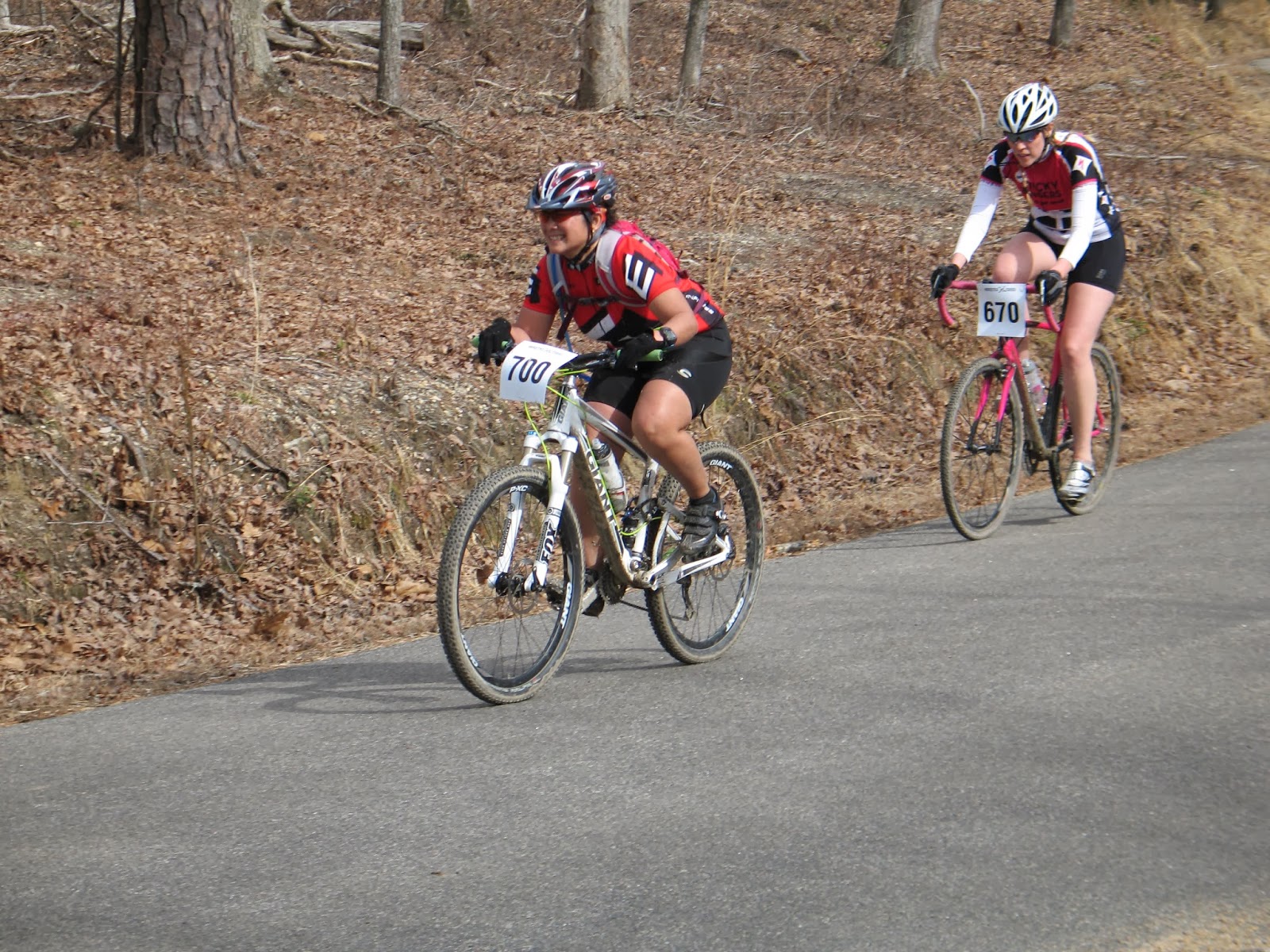 Thankfully Sarah let me power her T until Nick could come find me with my dry clothes bag.   Looking back was probably ridiculous.  My attitude out on the course was positive and it was only until AFTER I stopped my bike that I allowed my mood to shift.  Mountain biking is a chill, laid back, fun time and if the day isn’t fun I think that the culture of that group is that it’s OK.
The best part of DNF was that I got to see my training partner, Lauren who has gone and moved to KY on me and her gorgeous daughter. 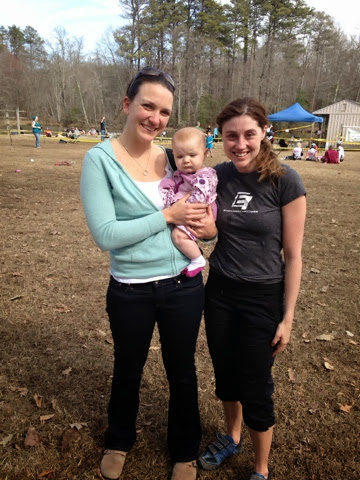 I did 30 miles and got in 2:30 of climbing/descending/maneuvering practice . The fact is, it didn’t feel “worth it” to me to keep hurting my delicate parts so much.   The pressure was unbearable.  Normally, I can talk myself through almost any race day setback or pain but this race was an afterthought and just trying it was a big deal for ME on that day.  I gave myself an “out” and decided to stop.  Normally, I’d be devastated, but really, my heart wasn’t attached and when I’m not emotionally immersed with a race, I have learned, I just don’t have that drive when it gets brutal.  I’d rather save myself for my Florida races in March and April.
On to new things… and definitely a new saddle.
By PVD@dm1n_072415|2014-02-24T21:35:00-05:00February 24th, 2014|