Have you ever heard that it is best to take the winter off from swimming?  Have you heard that triathlon swimming should be the lowest priority?

There are many coaches and programs that will entice you with magical sounding misguidance that swim training does not matter enough in the grande scheme of triathlon.   Swimming is the shortest discipline on race day.  The adage is that you are better off spending time on the bike or the run.

Some lucky triathletes who have been swimming competitively since age three could stand to “get away” with reducing or eliminating swim training but even so they won’t be the best triathlete they can be if they do not prioritize swimming to some degree.  For anyone interested in taking their triathlon performance to a new level, train as a triathlete rather than as a runner or a cyclist who only sometimes gets hair wet.  You’ll see more progress if you approach triathlon training in a comprehensive manner rather than considering each discipline to be an a la carte option. 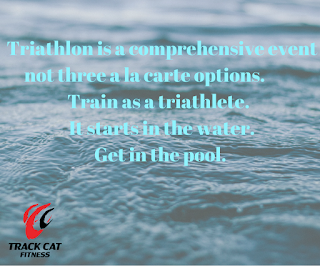 WHY the push to de-emphasize triathlon’s first discipline?

Many triathlon coaches do not encourage swimming through the winter and also minimize swim volume through the season because some (gasp…I’m about to shock you) do not understand how to nor care to write swim sets.  These folks could do well to make an effort connect with those who have the ability to help their athletes with swimming.  Further this advice to ignore the swim is an amazing marketing and sales tactic for those charismatic (sad but true) coaches who view athletes primarily in terms of easy revenue streams.  Telling the athletes what they want to hear builds enthusiasm and is very charming!

Let’s be real.  Triathlon swimming, particularly in the winter is annoying for most athletes.  You have to drive to the pool, often wake up at ridiculous o’clock and it is cold and dark out there.  Plus, wearing a speedo in January after all that holiday pie is just not always so appealing.  Hearing that you  don’t have to swim to be your best come spring sounds really nice.  Sign me up, right?  Right?

Some of my competitors text me for swim ideas because their coaches do not write swim sets.  I sat in a triathlon coaching clinic during a group break out session where a few of the other coaches wanted to “just send her (our hypothetical case athlete) to masters,” to take care of the swim portion of her plan.  I’m a huge fan of incorporating masters if that is an available option but not because I don’t want to or know how to write an effective swim program.

I like athletes to swim with others and encourage masters one or two times a week if that is an opportunity.  That supplements what we do in their solo sets where we work on an athlete’s specific individual needs. 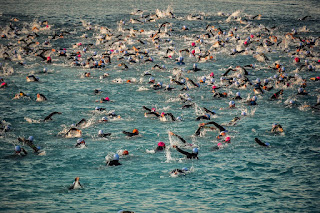 Why should Triathletes be in the pool even in the winter?

Becoming a better swimmer will get you out of the water faster.

Those who are concerned about cut off times will be tearing out of their wet suits and on to the bike with a solid winter of swim fitness behind them and have more “wiggle room” for making those times!  Those seeking to compete or set personal records will come out of the water with faster athletes which sets a tone for race day as you’ll be surrounded by a crowd that will push you harder.

Becoming a fit and efficient swimmer will give you faster bike and run times.

This is an often overlooked fact.  Triathlon is about metering out your energy stores.   If your swim fitness is low, you are starting the bike with less energy than if your fitness is high.  If “getting through” the swim drains you then your bike split and run split will suffer.

A strong bike flows from an efficient swim that did not zap excessive energy and a strong run is followed by a bike that leaves enough “in the tank” so to speak.  Triathlon is not three separate disciplines to be treated in silos. Each leg impacts the next so one cannot be broken out of the complete equation for success.   To skip out on swim prep and start off the race already taxed is not positioning yourself to race to your full potential.

A strong swim positions your mindset for a strong race day!

Becoming more confident in the water enhances what I like to call your “mind power” or mental toughness.  If there’s a current or chop and you are comfortable in the water not only are you fit to swim and reducing physical energy but you also have that competitive mental advantage for triathlon swimming.

Your stress levels are in control because you have the fitness, skills and comfort in the water to get you to the other side!  I like to add open water swim simulation sessions for swimmers of all ability levels who cannot get into the open water year round to keep swimmers efficient and sharp mentally.  The right mindset drives race day success and often leads to breakthrough performances! 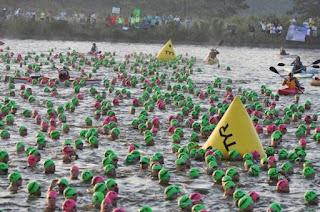 How much and how often should a triathlete swim?

Swim frequency is important.  Swimming four to six days a week can help a triathlete see more significant gains as they will not lose that feel for the water.  Let’s face it those of us who learned to swim competitively as adults are not hard wired to travel horizontally through water.  It is unnatural.  The more frequently we are in the water the better we can adapt.  Superior results can be obtained with frequent swims because it helps our bodies maintain that “feel for the water” from one session to the next.

Maintaining your swim requires three swims per week generally speaking.  The volume of your triathlon swimming should vary by ability level and goals.  However, whether your weekly swim yardage is 4,000 or 12,000 splitting that out over many days of the week is the best way to go.  Let’s say you’re doing 12,000 yards per week.  Rather than swim two 6,000 yard swims you can generally expect to improve more if you split that into four 3,000 yard swims.

Of course if holiday obligations and winter sets you back to only getting in the pool one or two times per week that is better than nothing but certainly not ideal for taking your triathlon swimming and overall race performance to new levels.

The point is, you are a triathlete which includes swimming, cycling and running in unison.  To omit the first discipline isn’t treating the sport as the whole package and therefore isn’t optimizing potential.  To approach triathlon as divisible pieces diminishes your chances for maximal progress.

In triathlon, the disciplines flow seamlessly from one step to the next and that all starts in the water!

What motivates you to get in the water?  I’m always happy to help with triathlon swimming ideas!