In August as I was coming off crutches from a broken foot, I was not sure if I should plan to do a late season short course triathlon or to just focus on the off season and come back in 2014.   I received a coupon code from Inside Triathlon Magazine and a pair of socks.  My foot felt great after wearing those socks so I decided they were my new lucky socks.  Then, I had a lot of soft tissue set backs and it did not look like I’d be racing.
By October though, I knew I could complete the distance.  I talked to Nick and we decided to turn it into a road trip vacation.  He chose Clearwater as our vacation destination between the race options for a quiet, low key vibe.  I was up to distance in the swim and bike and it would be my longest post-wreck run but I figured with the water running I had put myself through that I’d be able to pull it off.  I wanted to experience racing again.  I wanted to clip on the race number and feel the comraderie on the course.  I wanted to experience the race force harmony again with hundreds of people all brought together for different reasons on the same day working hard together and experiencing the pain and the glories side by side.  Its such a beautiful thing, challenging eachother and bringing out everything we have on the day.  I wanted to feel it again.  I love racing as a celebration of the collective human success stories and what each of us can achieve on the day.   I wanted to celebrate my health.

I signed up and then promptly told coach Michael in an e-mail.  Now, I have not done this before (signing up at random), but I had too much enthusiasm to wait.   Coach recommended I switch to the sprint, but I really wanted to try the longer distance. We came up with a plan together though, that I was willing to commit to.

I referred to the race as the Lucky Socks Tri.  Coach says, “Kelly, I’m looking up this race, but I have not heard of it?”  Oh, yeah…its TriRock Clearwater.  He wrote “Lucky Socks Tri” in my training plan for me though!  : )

I was so nervous going in that I didn’t tell many people.  I didn’t want to “jinx” myself.  In fact, with the hubby out of town right before the race, I needed help with the brake pads on the race wheels.  The Endorphin Bike Shop guys were asking, “Why do you want race wheels on in November?”  I replied, “I need all the advantage I can get to keep up with the pack at the Winter Group Rides!”  I guess I’d rather look ridiculous than “jinx” it!   They chuckled at me, but since I was insistent I needed the wheels, they got everything together for me and did so really quickly too, especially in consideration of not knowing I had a race.  After the fact, I did confess I had a race coming up.

Nick and I arrived at packet pick up and I was actyally far too happy.   The white sandy beaches, blue waters, exciting race expo all launched me into an overly grateful and emotional state.  I needed to keep cool.  I kept nearly tearing up doing simple things such as picking up my packet, or placing my stickers on the bike.  I really had MISSED the routine so very much and was just crumbling with joy over every step.  Nick kept saying not to start bawling in the middle of my race, a serious risk that could slow me down (ha)  and he found this outrageously absurd video for me to think about if I started tearing up.  “Here come the waterworks”…

HEY…  Whatever it takes to “keep cool”, right?

OK so the Race:

I met some really cool girls in transitions.  We bonded over setting up in the dark.

The start was a run in swim.  The entire woman’s field was in the same wave.  I had done some beach start training with my Endorphin Teammates who were prepping for IMFL this summer so I was very prepared for the run in.  I learned that day that you can get your heart rate up but also gain a lot of time if you run in and pick up those feet until its time to dolphin and swim.   I even led the race for a few seconds as I ran into the water and quickly got dropped by the lead pack.  This race I actually was able to draft off a few racers and I am proud of this since I normally swim alone.  My FAVORITE part of TriRock’s swim was that they labeled the distance on each buoy so you knew exactly how far you had gone.  There was some chop after the first turn but it wasn’t severe. 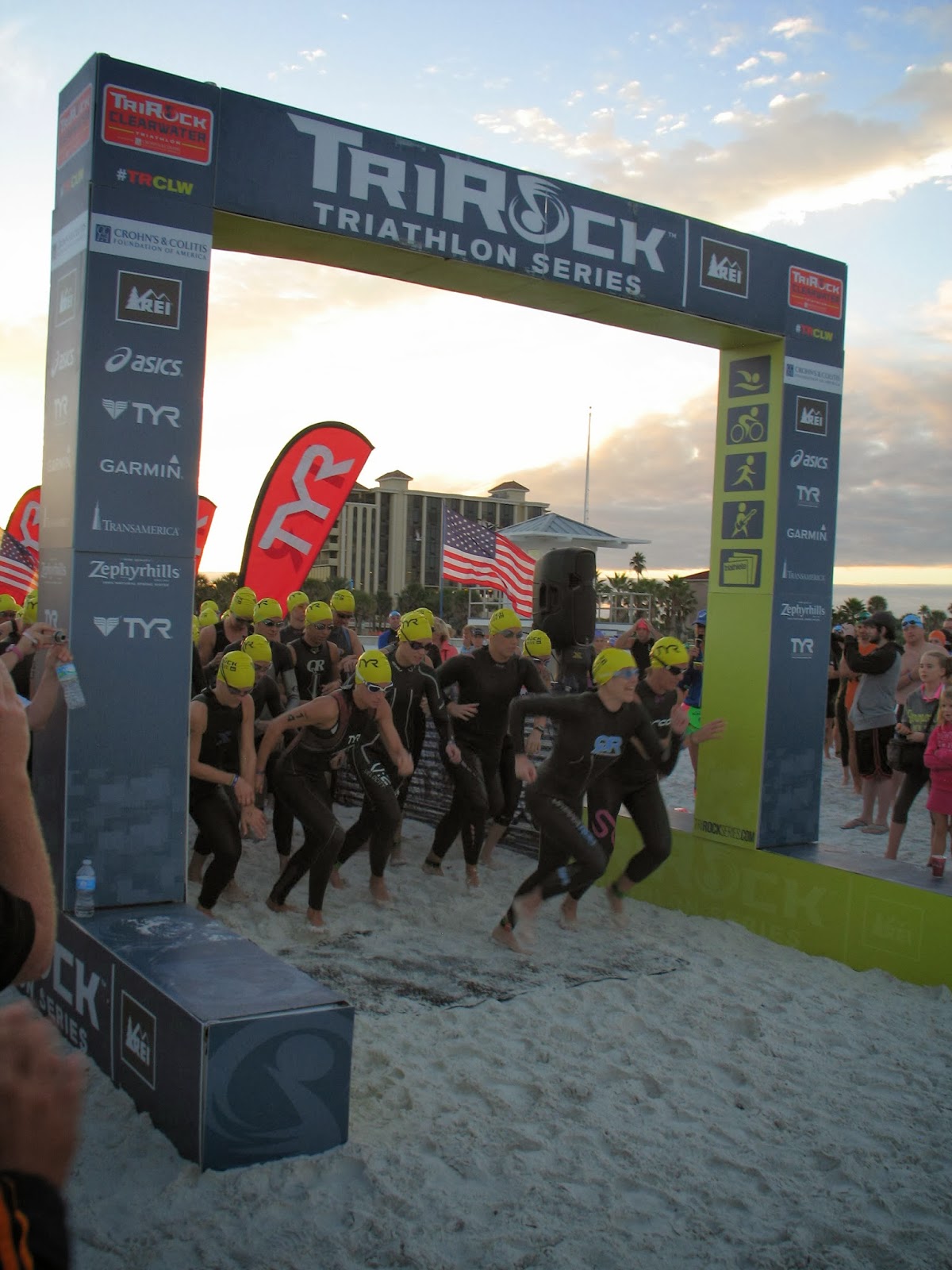 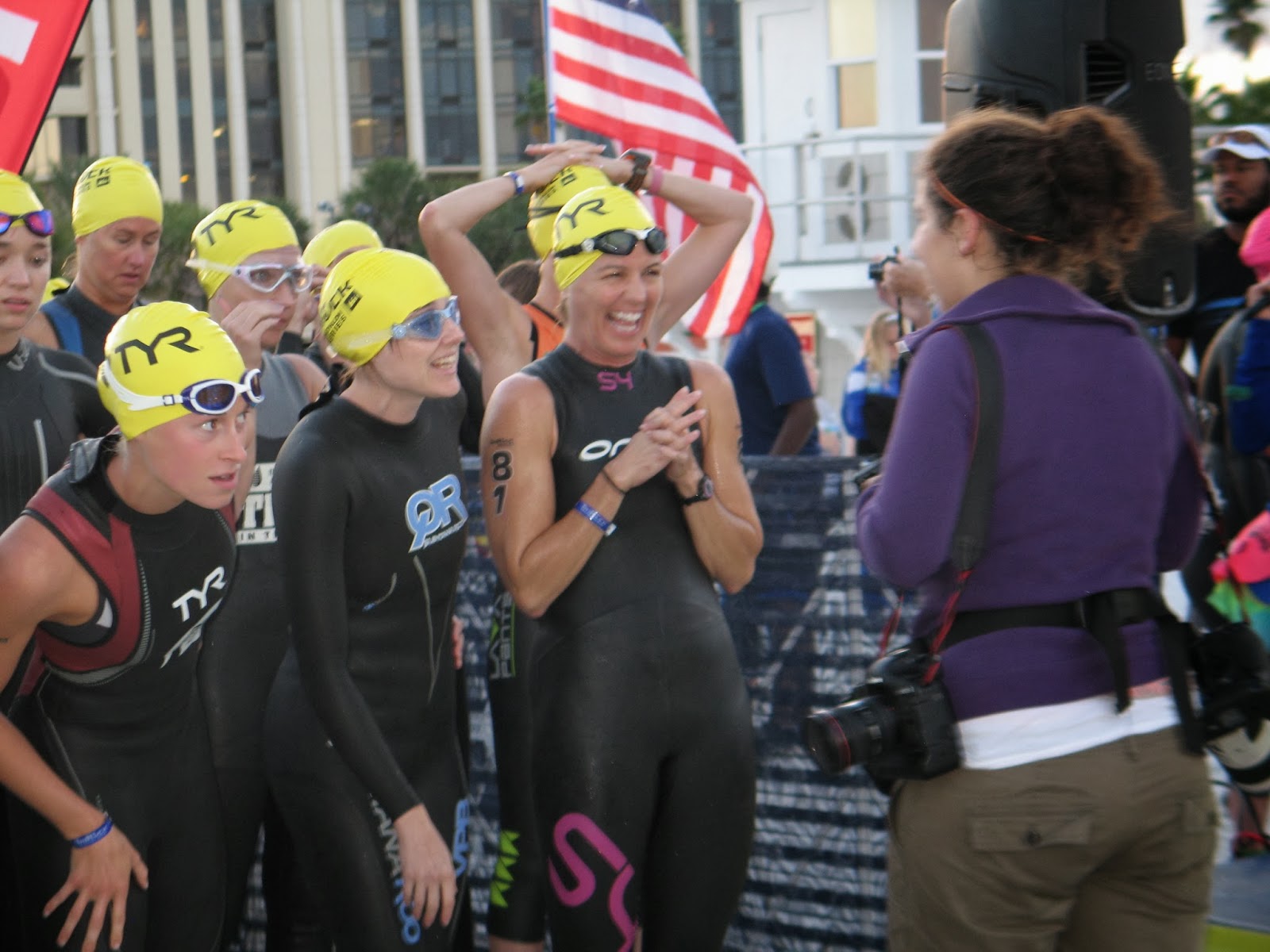 This bike was mostly flat except for those pesky bridges.  Now, my friend Angela from HS recently took up cycling and lives in the area.  She had warned me with frequent text “feedback”all summer about the exhausting overpasses.  She was not kidding.   The view at the tops were gorgeous though.  lots of turns on this course so I did lose some power and speed on these but otherwise it was a flat and fun course winding through the neighborhoods of Clearwater. 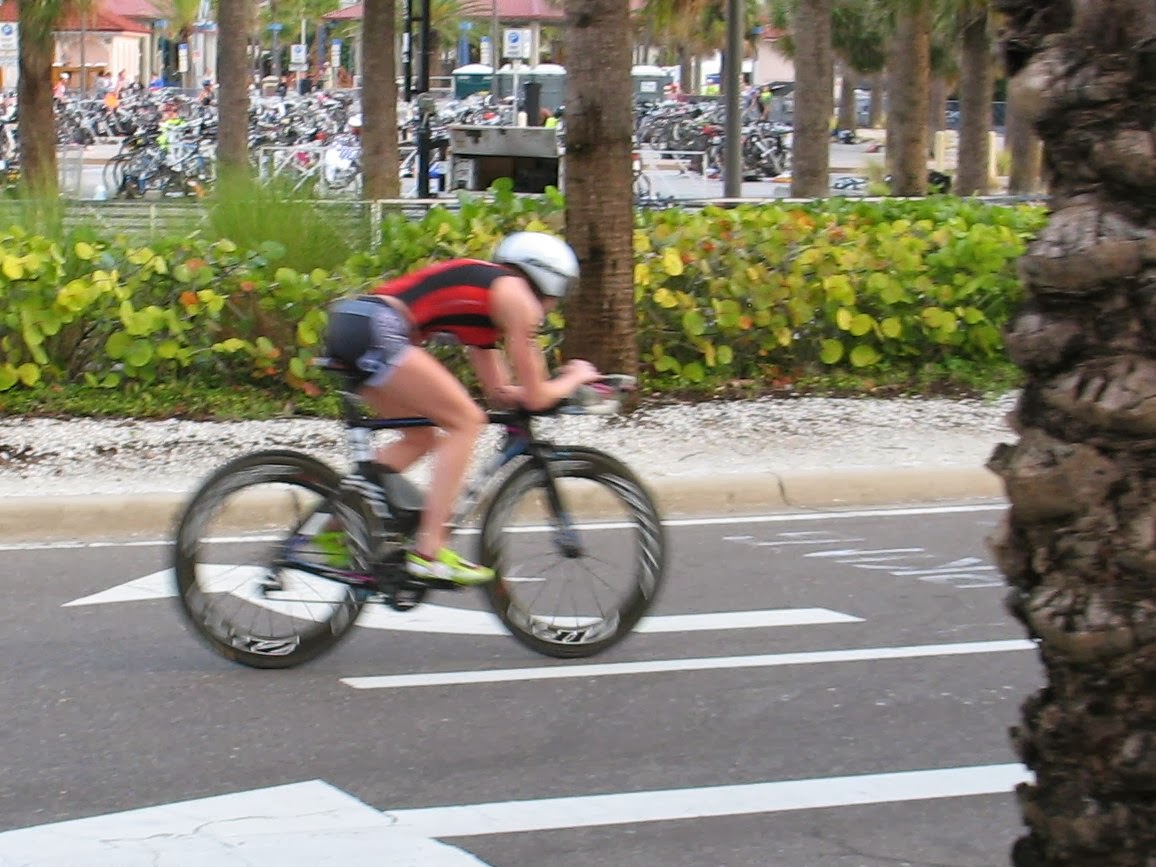 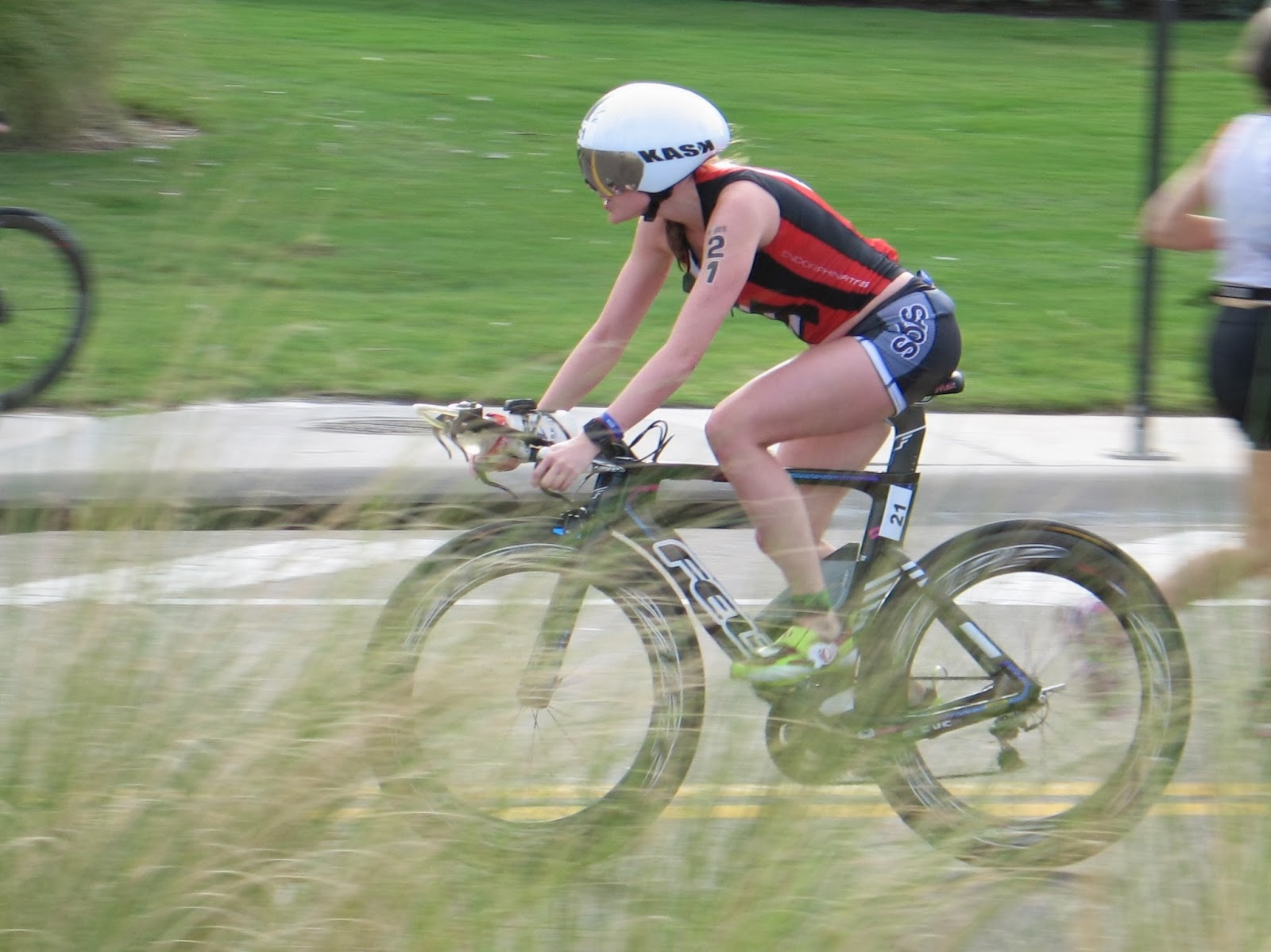 T2   2:02
Rusty here too.  I didn’t have enough time to take off my shoes once I realized the dismount line was approaching!  No flying dismounts today.

THE RUN:  43:40
This was my longest run since my crash and I was advised to pace it and keep my HR below a certain point.  I ran in like a metronome.  The overpass bridges were gorgeous but sure did take a toll.  Luckily there course was mostly flat and the weather was a perfect 70 degrees and sunny on the run.  Nevertheless I loved the scenery of the ocean, the skyline and the boats and being surrounded by palm trees along the sidewalks.  Did I start to tear up a bit when I saw my pace on the 910xt at the turnaround point?  Almost…but then recalled those rascally cartoon characters and chuckled to myself instead. 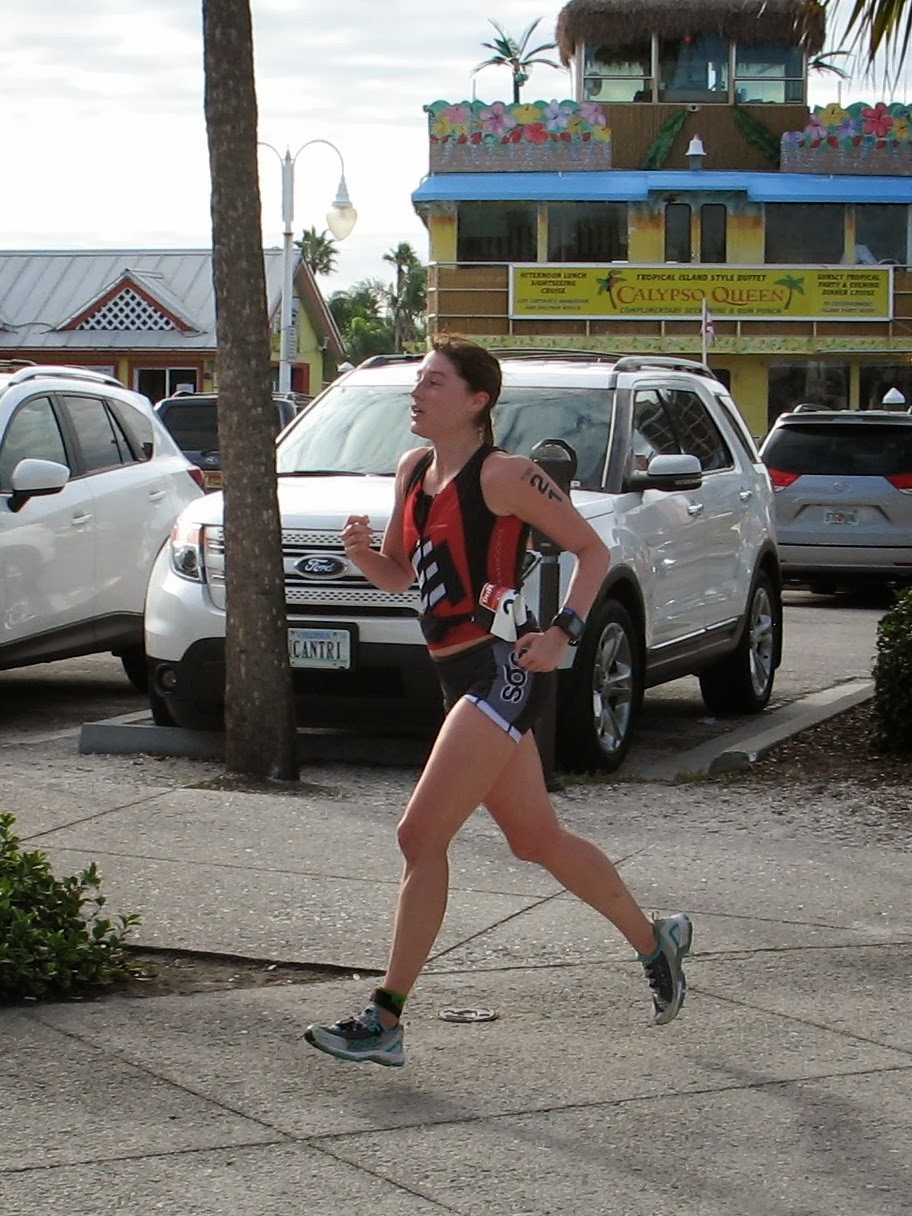 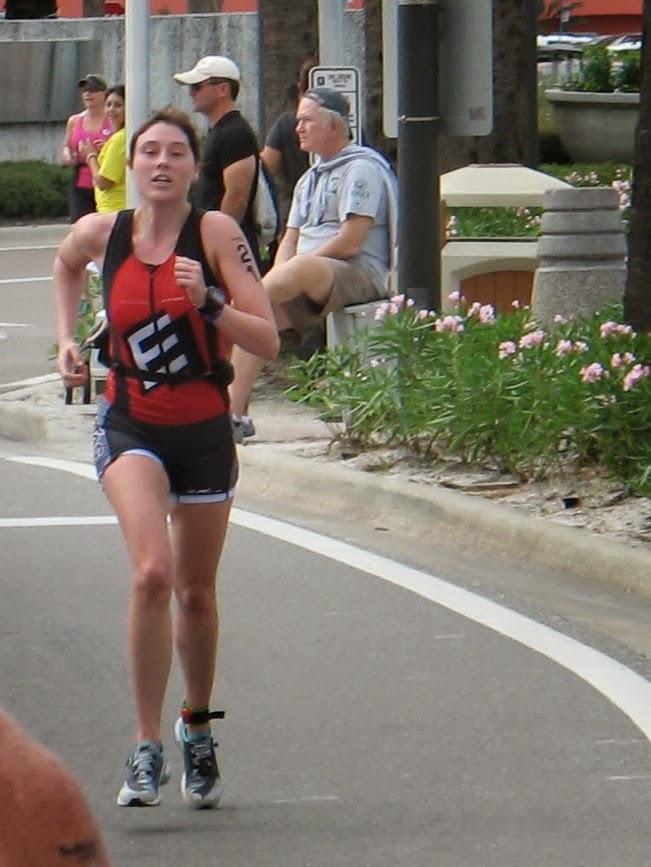 I did have a fellow racer, a kind swift male triathlete help me out when I thought I might have gotten lost.  I saw only sprint numbers rather than the 2 digit olympic distance numbers around me.  He told me I was far up in the field and to relax.  I was so grateful for this random race angel.   He reminded me to keep my steps light and quick and relax my upper body.   I wound up running several ladies down and finished 4th overall, my highest overall placing I’ve ever done as well as secured an AG win.  I guess that water running really did pay off!

They gave us beer mugs as trophies which was exciting.  Of course, I won mine for Nick!  : ) 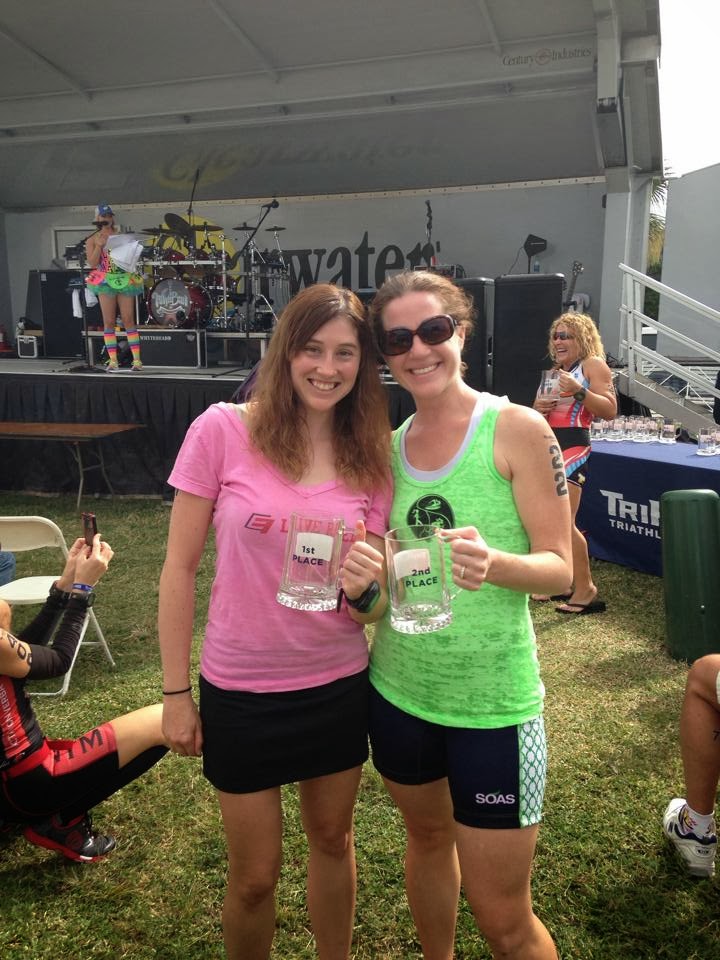 The woman on the podium with me was a really cool woman from Georgia and we had shared a transition rack so I was really happy to connect with her at awards.   She had mentioned she’d experienced anxiety during open water swims but she really crushed it and overcame the nerves which is what this sport is all about… to perservere and overcome obstacles.

After the race, Nick and I relaxed by pool and celebrated.  Its wonderful to be back! 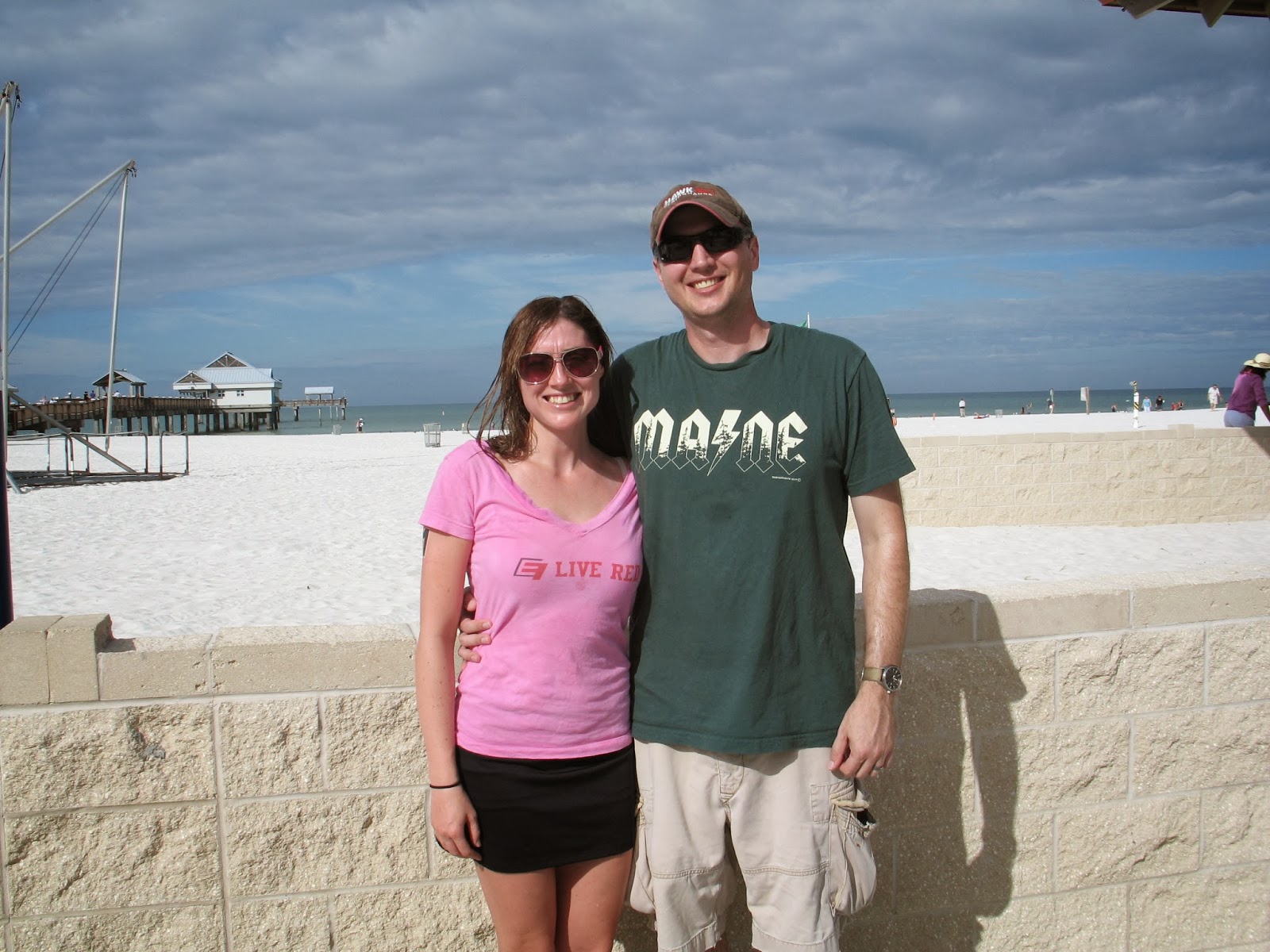