Despite dealing with 32 degree temperatures and a delayed race start fellow runners were friendly and in great spirits at turkey trot I joined in Maine.  Plenty of friends and family were toeing the line. 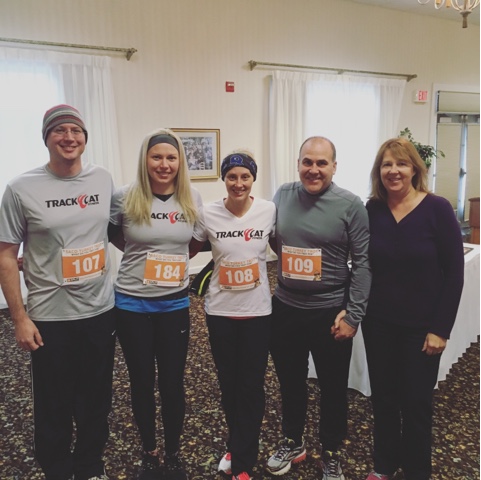 I launched off the front with a pack of guys at aggressive clip but quickly backed off.  I ran solo and led the race for women at a 6:35 pace.  I thought I might be close to a PR (personal record) if I could just hold that level.  Exciting!  Then, with just over a mile to go out of nowhere a small gazelle like girl blazed past me.  “Wow, she’s fast,” I thought as I watched her effortlessly gliding ahead.  I let her go and carried on at my consistent effort level.
A vivid moment from the past suddenly entered my mind.  Apparently a clear movie style flashback can occur mid 5K race as you’re being passed, gasping for breath and pushing your physical limits of run intensity. My thoughts transported me back years ago to a local sprint triathlon.  That day was a catalyst for me in sport.
I was ticking off a perfectly paced run mile split after happily checking off my swim and bike goals.  A few women had passed me, but I was not phased since my objectives were being accomplished.  I focused on my own process. When my friend Kate ran by me early I remarked, “great job!” Suddenly my coach at the time, Michael’s voice came through loud and clear.  “Race her, Kel,” he gasped with authority.  He was finishing his second run lap for a win and I suddenly had a new goal.  That moment was a game changer.
I chased, caught and dropped Kate and ran down another cluster of women.  I was burning up inside unabashedly gasping for air.  The girls were making me work to stay with them.  In a breakthrough day I finished 6thfemale and became the age group champion.  It was a break through because I blew away all run expectations we set based on training.  It was an “aha” moment regarding using competition to achieve new levels in triathlon.  I let myself really race others and I performed better as a result.
My coach back then said those words were all he could muster but he was compelled to speak up because he knew I had more when he saw how easily I was running and that I was talking to the girl passing.  It was an eye opener that I could go faster.  I began learning how to use the competition to get more out of myself.
I am very naturally competitive in other areas of my life but it has been ingrained over years to become extremely inwardly focused in endurance sports. Having spent years at the back of the pack and yet with a very high achieving personality I managed that by setting controllable goals for my races.  Race my own race.  Focus on my own process.   Be smart.  I took all of that advice to the extreme!  Other than the joy of being part of a social atmosphere I essentially ignored individual competitors on course early on. The great takeaway is that I still naturally celebrate mini victories and walk away from races happy with a sense of accomplishment regardless of “uncontrollable” outcomes. On the flip-side, if I do not set any outcome goals or have a competitive advisor of sorts remind me to get out there and race others I would tend to let another pass without a fight and miss the opportunity for both of us to bring forth a new level of performance through working together in competition.  I continue to expand my self-regulated permissions to really compete in races with athletes of similar ability level. Competing results in higher levels of performance.  It is called a race for a reason, after all.  There is a balance to strike.  A mindset that is extreme on either end of the spectrum is not ideal for a harmony of both achievement of potential and satisfaction with the experience.
Flash forward to present day 2016 Turkey Trot.  “Race her, Kel,” resonated in my mind.  I realized that voice was right.  I could try to keep up.  A turkey trot is a great place to take a risk.
I could still go for the win!
I amped up my pace and caught gazelle girl.  I clung beside her shoulder with all my might.  I did not glance at my wrist for fear of what ungodly pace might be on the Garmin’s display.  She tried to drop me with some quick but short accelerations.  I would fall behind but quickly reel back when she slowed.   I wasn’t backing down.  I saw the corner store signaling the turn to the finish was near.  I decided to go for the win.  I dialed up my speed.  I thought I had it.  I think I was drooling.  The line was in sight.  I underestimated the girl’s ability to sprint.  She flew ahead in the final steps and crossed just seconds before me to take the win.  Nevertheless, it was one of my best races to date!  If I had not allowed myself to take a risk and compete I wouldn’t have known that I was capable of more.  Healthy competition amongst well matched individuals brings each to higher levels.
We rung the super fun PR bell near the finish together. 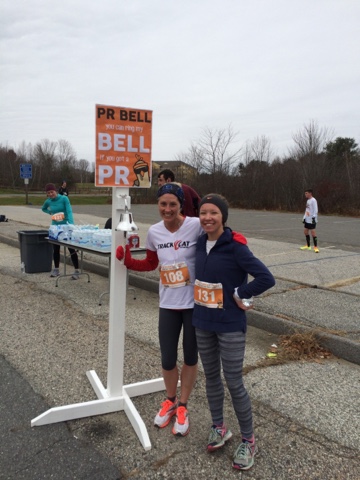 She was a collegiate runner appropriately named Angel.  Our 3rd mile was 6:24 pace plus right around 6:00 flat out pace in that final .10 finish sprint.  I set a 22 second 5K PR at this turkey trot.   I set that personal record because I decided in the moment to take a chance and to really race and use the competitive environment to push myself.  I have to wonder…could I have gone even faster with a bit more confidence?  It is exciting.
Just as I returned to breathing normally my mother and I watched my father finish.  I saw him approaching and ran to see him finish  his race time on the clock near the line. Dad won his age group.  Stephanie was 2ndin hers.  Nick used an old Garmin I found and paced himself to a 5K PR as well.  We certainly started our days off on a high note and worked up our appetites for our Thanksgiving (recovery) meals to follow. 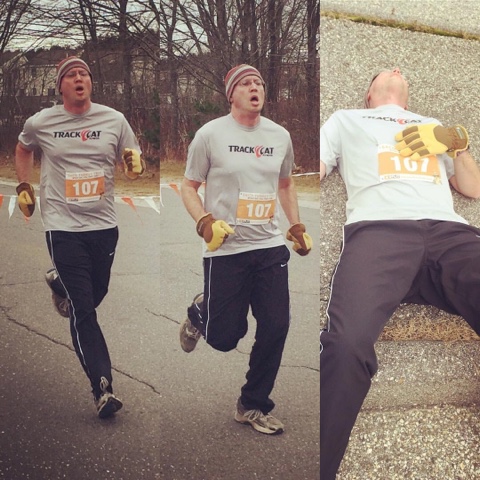